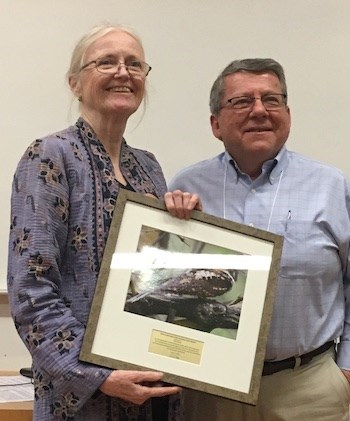 This award is presented to an individual, team or media outlet who has engaged in effective communication on one or more conservation issues.

Elmvale resident Kate Harries is a board member of AWARE Simcoe. She is webmaster for the AWARE website where she writes a blog and contributes articles. She is an active member and past president of the Midland-Penetanguishene Field Naturalists Club and a board member of the MTM ConservaJon Association.

“I’m thrilled to be recognized by an organization as large and influential as Ontario Nature,” Harries said. “The award is recognition of the efforts of all our members who are active across Simcoe County, and I’m privileged to be working to share their information and perspectives.”

Ontario Nature is a conservation organization that protects wild species and spaces through conservation, education and public engagement and is a charitable organization representing more than 30,000 members and supporters, and more than 150 member groups from across Ontario.

AWARE Simcoe is a citizens’ group that works to protect water, the environment and health through transparency and accountability in government.