There are 40 flags throughout the downtown, 33 of which include images of soldiers and seven others with a Remembrance Day theme
0
Nov 8, 2019 7:30 AM By: Raymond Bowe 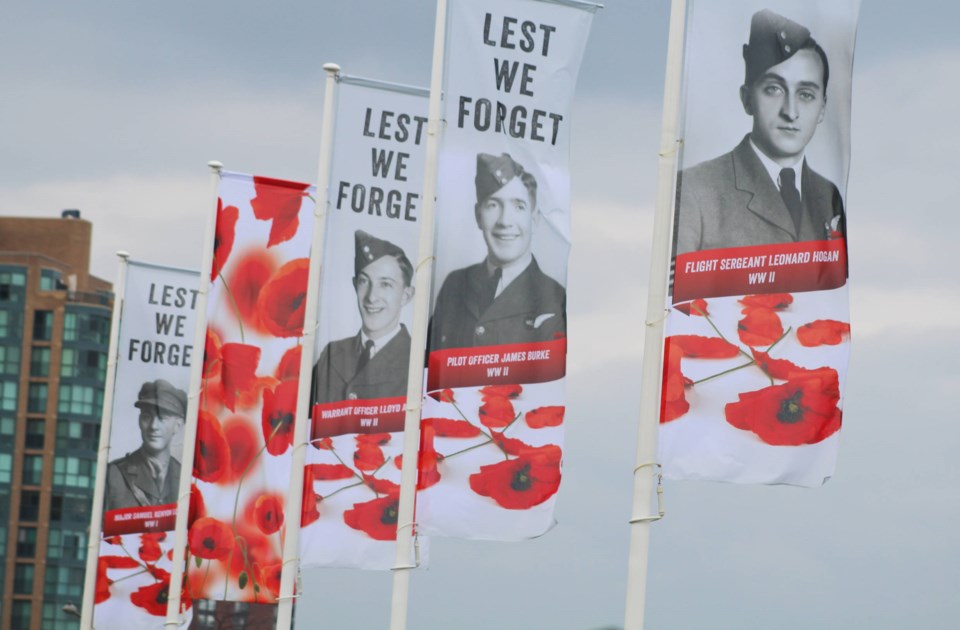 Special flags honouring local soldiers, many of whom died in action, line the street near the city's lakeshore. Raymond Bowe/BarrieToday

Their names may be familiar from city street names, but now you can see their faces on flags of remembrance flying in the crisp autumn breeze along several Barrie streets.

Remembrance Day flags honouring local soldiers who went off to war, and many of whom died in battle, are sprinkled throughout the downtown.

Mayor Jeff Lehman called it "a touching tribute" to the soldiers.

"As mayor, I feel honoured when I drive along and I pass them," Lehman told BarrieToday. "It makes you think. These are the people who gave the ultimate sacrifice."

The flag display started in 2017 for Canada 150, but this is the first year the soldiers' faces are featured on the banners.

A lot of smaller communities have been doing something similar to honour their soldiers in recent years.

City staff have been working with members of Heritage Barrie, Grey & Simcoe Foresters Regimental Museum, Barrie Royal Canadian Legion, and the Simcoe County Archives to design a series of flags to commemorate local soldiers who served in the Canadian Forces during various conflicts.

Local resident Craig Froese, who's the vice-chair with Heritage Barrie, said it "was an opportunity to put a name to the face."

"We're really, really happy about it. I think they look beautiful," said Froese, who's a history teacher at Nantyr Shores Secondary School in Innisfil. "They're so young, some of them in their early 20s."

There are 40 flags throughout the downtown, 33 of which include images of soldiers and seven others which have a Remembrance Day theme.

"I'm hoping that people really like them, and maybe next year we can add another seven (soldiers), because the other seven (flags) are just poppies. Although, the poppy ones look really beautiful, too," said Froese.

Even though he considers it "a small project," Froese says it made him proud to contribute.

"As a history teacher, it's great to see the actual person and not just a name," he added.

Researchers tracked down their stories and a decent image to use on the flags, which went up on Nov. 1 and will remain in place until Nov. 15.

"There's obviously a lot (of soldiers to honour), almost 300 for Barrie, Innisfil and (the former) Vespra (Township), so I said we should start out with those communities since they're on the cenotaph downtown," said Froese, who worked closely with the Barrie Royal Canadian Legion and the Grey & Simcoe Foresters.

Lehman also credited the historians behind the project.

"It seems a little shocking, but though their names are on the cenotaph, there isn't a central place where all of those stories were being told until these historians — Clint Lovell, Froese and others — made an effort to do it," the mayor said.

The manufacturer needed decent images to work with and improvements in photo technology helped get the flag project off the ground.

"It's a pretty special ability the company is able to do," Lehman said. "And it's a Barrie company."

The Look Company, based on Saunders Road, was behind the flags.

"A lot of the photos actually came from the Simcoe County Archives and they had a lot from the boys that went to (Barrie) Central (Collegiate)," said Froese, who added they were looking for crisp images in order to make it a fitting tribute.

Around the city, there are 11 flags on Lakeshore Drive, eight on Simcoe Street, five at the downtown library and at city hall, four at the Maple Avenue transit terminal, three on Tiffin Street, two on each of High and Toronto streets.

"To date, the response has been very positive," said Nora Gavarre, the city's business development officer. "We’ve seen a number of emails in support of the flags and positive comments from the public on social media."

Froese said he wanted to represent soldiers from a variety of conflicts and ranks, "mostly men that had fallen, but there are some that didn't, but they had really clear pictures. The vast majority of them are men that died."

Froese said he's still working to have the Korean War represented, but he's had a difficult time tracking down decent images of the men who fought there. He hopes someone from the public could come forward with high-quality images.

One of the featured soliders who lived through his campaign was Maj. Samuel Kenyon Lount, who served in the First World War and is the highest-decorated man from Barrie who is featured on the flags.

Going way back even farther, another featured soldier is Pte. James Halkett Findlay, a Barrie man who died in 1900 during the South African War.

"His memorial is actually in the Presbyterian church downtown," Froese said. "He's not on the cenotaph, but he should be. It's really kind of famous in that it's the first Canadian to die in a conflict outside of Canada."

No decisions have been made on whether to expand the flag display, but Froese says he hopes the city will add to it.

"If people like it, it would be nice to continue," he said.

The soldiers featured on the flags are:

For more information on Barrie-area soldiers who have fought in various wars, click here.

Tiny Township woman accused of impaired driving, after dining and dashing
Feb 27, 2020 6:15 PM
Comments
We welcome your feedback and encourage you to share your thoughts on this story. We ask that you be respectful of others and their points of view, refrain from personal attacks and stay on topic. To learn about our commenting policies and how we moderate, please read our Community Guidelines.