Prepare to be calmed as city rolls out speed-control measures

Each city ward will have temporary speed cushions on between five and nine streets, although some streets will have two
May 10, 2021 1:47 PM By: Bob Bruton 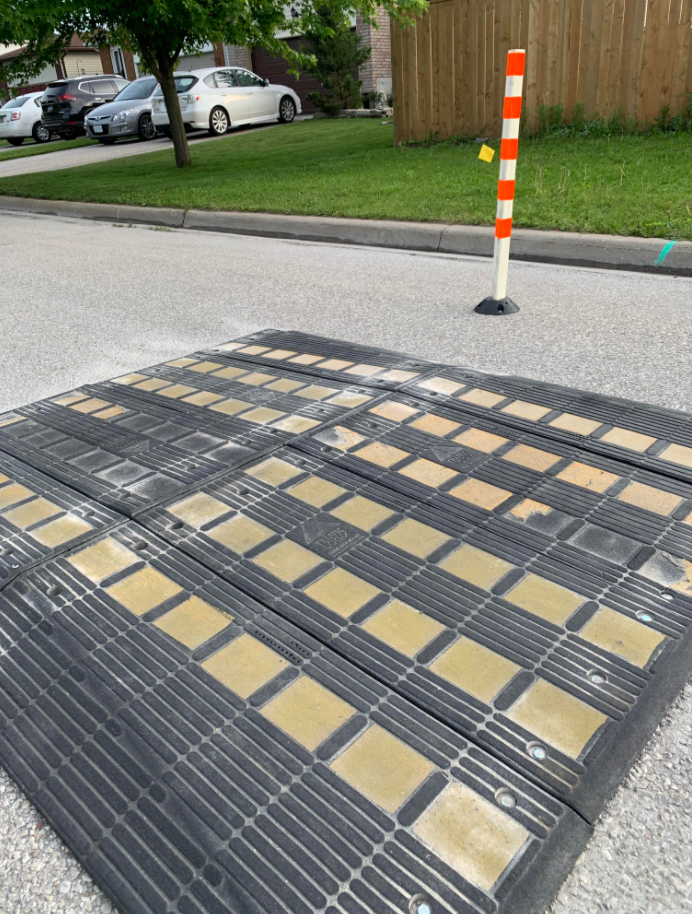 Barrie traffic will be calmed and with it hopefully drivers, too.

The city is rolling out its 2021 traffic-calming measures and there are three main initiatives: radar speed boards, temporary speed cushions, and permanent speed bumps.

“Staff have started the implementation of the 2021 traffic-calming program with the rotation of radar speed boards and the temporary speed cushions will be installed later in the spring,” Michelle Banfield, the city's director of development services, said in a memo dated May 10.

She said city staff are currently working toward the implementation of permanent speed bumps across all 10 Barrie wards, with an installation date planned for the fourth quarter of 2021.

An integral part of the traffic-calming plan, Banfield said, is the installation of radar speed boards, which provide a visual number to motorists to help reduce their speeds. Studies have shown radar speed boards reduce vehicle speeds between three and five kilometres an hour.

The radar speed boards also allow city staff to collect information regarding vehicle speeds and daily traffic volumes. This data can then be used to provide detailed information to assist in recommendations to address operational and safety concerns.

The information can also be provided to Barrie police about peak hours for evidence-based enforcement to help increase efficiencies.

Staff are working with the city’s contractor to rotate the speed boards throughout all 10 wards each quarter.

But not every Barrie ward gets the same number of radar speed boards.

Each ward gets one permanent speed bump location; Ward 1’s is on Codrington Street between Vancouver and Weldon streets; Ward 2’s is on Codrington between Berczy and Dundonald streets; Ward 3’s is on Lions Gate Boulevard between Livingstone Street and Cundles Road; Ward 4’s is on Hanmer Street West between Finlay Road and Anne Street North; Ward 5’s is on Letitia Street between Frost Trail and Anne Street North; Ward 6’s is on Summerset Drive between Wright and Gore drives: Ward 7’s is on Mapleton Avenue between Essa Road and Veterans Drive; Ward 8’s is on Holgate Street between Bayview Drive and Innisfil Street; Ward 9’s is on Loon Avenue between Chalmers Drive and Huronia Road, and; Ward 10’s is on the Queensway between Empire Drive and Succession Crescent.

Each city ward will have temporary speed cushions on between five and nine streets, although some streets will have two.

“Traffic services staff within the development services department have worked with the local ward councillors and resident feedback collected through the online interactive request map tool to determine the locations of the traffic-calming measures for 2021,” Banfield said in her memo.

There was already $200,000 in the budget, for each of 2021 and 2022, from the tax capital reserve, for permanent concrete speed bumps to provide a year-round detriment to speeders.

The temporary ones are called cushions. They are rubber so they might slightly cushion while vehicles go over them.

The permanent ones, made of concrete or asphalt, will have zero cushion so are called speed bumps.

Last year, the city offered an interactive map that residents could use to select a preferred location for speed cushions to be installed. The information was then shared with the ward councillors, who in turn help determine the feasibility of the preferred locations.