Firearms training facility was included in the plans for the Fairview Road emergency services campus, but has been deferred indefinitely
0
Dec 2, 2019 7:00 PM By: Raymond Bowe 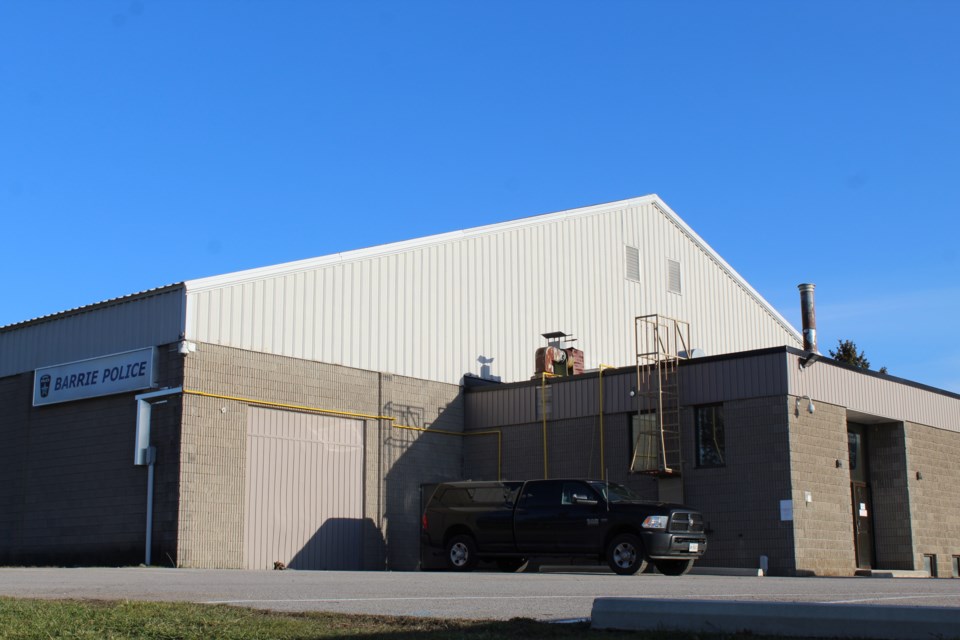 The Barrie Police Service is requesting funding from the city in order to make upgrades to their building at 79 Bell Farm Rd., for firearms training. Raymond Bowe/BarrieToday

UPDATE: During budget deliberations, council chose to spend $75,000 on the city-owned police building for repairs to the roof and air-handling units, pending final approval of the 2020 budget. The money will come from the tax capital reserve.

"This is one of our assets that we need to fix before the problem gets worse," said Coun. Robert Thomson at general committee. "These aren't actually wants, these are needs."

As part of the Barrie police department's $55.8-million budget request from the city, they are looking for $500,000 to upgrade one of their Bell Farm Road buildings for use as a firearms training centre.

In 2009, the city purchased the building at 79 Bell Farm Rd., which was previously a fitness centre. It was meant to serve the police department's temporary needs while a new headquarters was being considered.

Although the new $100-million Barrie-Simcoe Emergency Services Campus is nearing completion on Fairview Road, the second phase, including a Barrie police and fire training facility, was deferred in June 2017 until further direction is received from Barrie city council and Simcoe County council.

However, the so-called Building 'B' portion of the new campus facility includes "critical needs" for the police department, including a firearms training centre, according to a report presented to city officials.

In the meantime, the report indicates the Bell Farm Road building requires a "major overhaul," both in terms of renovations and deferred maintenance, in the interim until such a facility can be built at the new Fairview Road campus.

There is no timeline for that to happen.

"Deferring a firearms range until Building 'B' is constructed will continue to hinder the service from properly training its members, both from the front line and those that are specialized," says the report.

The police department's current facilities at 60 Bell Farm Rd., as well as headquarters at 29 Sperling Dr., will be relocated to the new campus once ready in the coming weeks.

In her budget presesntation last week to council, Police Chief Kimberley Greenwood highlighted the training facility under the department's capital funding request for 2020. She identified "the gravity and the need for immediate investment" in the Bell Farm Road building's infrastructure and pressing need for an indoor firearms range.

In its 2020 budget request, city police are looking for $500,000 to complete deferred maintenance on the north-end building, including $50,000 for a feasability study regarding an indoor firearms range.

The 79 Bell Farm building, which was initially expected to be a temporary solution of around five years, required significant upgrades and maintenance, which previously led to a $1.3 million request from the city to refurbish the building. However, the city approved $650,000 in funding at the time. Another $200,000 was added for fire suppression systems.

Construction took several months and police assumed occupancy of the Bell Farm Road building in January 2015. The department’s quartermaster, property and evidence, training, and policy and research units were relocated to the building.

In a 53-page report prepared by city police, the department notes the purchase of the Bell Farm Road building "was intended for Barrie Police Service occupancy and was made without any consultation with the service."

"This temporary solution was acceptable, knowing that this was an interim solution for a surplus facility while a new facility was being considered and constructed," Barrie Police Services Board chair Angela Lockridge wrote in a letter to council.

City police currently use the Barrie District Hunters and Anglers Conservation Club range in Midhurst for firearms qualifications, but this is "not ideal" because it presents liabilities related to training requirements, costs and risks, according to the department's report. Annual rental costs are approximately $20,000.

"Police training and specialized firearms training is outside the scope of most civilian gun ranges," the report says. "The shooting techniques and tactics we train with and teach to our front-line and tactical officers are not meant for the general public to observe."

Should the agreement with the club "collapse," it would put the police department's legislative requirements at risk.

Another option in the area is the Barrie Gun Club, but, with more than 1,000 members, the club is not in a position to rent range time to outside agencies.

Police have also used facilities at CFB Borden, but it's a 35-minute commute and range time can be cancelled at any time as police requirements are not considered a priority.

Barrie police have also canvassed other police agencies, including Ontario Provincial Police, but they're also not in a position to provide range time due to use by their own officers.

With growth coming to the city's south end, a significant population boom will accompany it, meaning Barrie's police department could grow to around 400 officers by 2040.

There are also issues with the Bell Farm Road building being used as a temporary firearms training facility, including city zoning and bylaw regulations, building construction and infrastructure.

An indoor firearms range at the Fairview Road campus, meanwhile, would include 12 lanes and would be allow shooting from varied distances, which is required by provincial adequacy standards.

Every officer is trained annually on their pistol and must pass the mandated shooting qualification. This requires a 10-hour day of training and shooting, resulting in approximately 2,370 hours on the range, which does not include officers that are trained on C-8 rifles or the tactical unit requirements.

The Barrie police budget request reflects a 4.7 per cent increase over 2019.

Chief presents police department's 2020 budget to council with 4.7 per cent hike
Nov 26, 2019 1:45 PM
Comments
We welcome your feedback and encourage you to share your thoughts. We ask that you be respectful of others and their points of view, refrain from personal attacks and stay on topic. To learn about our commenting policies and how we moderate, please read our Community Guidelines.