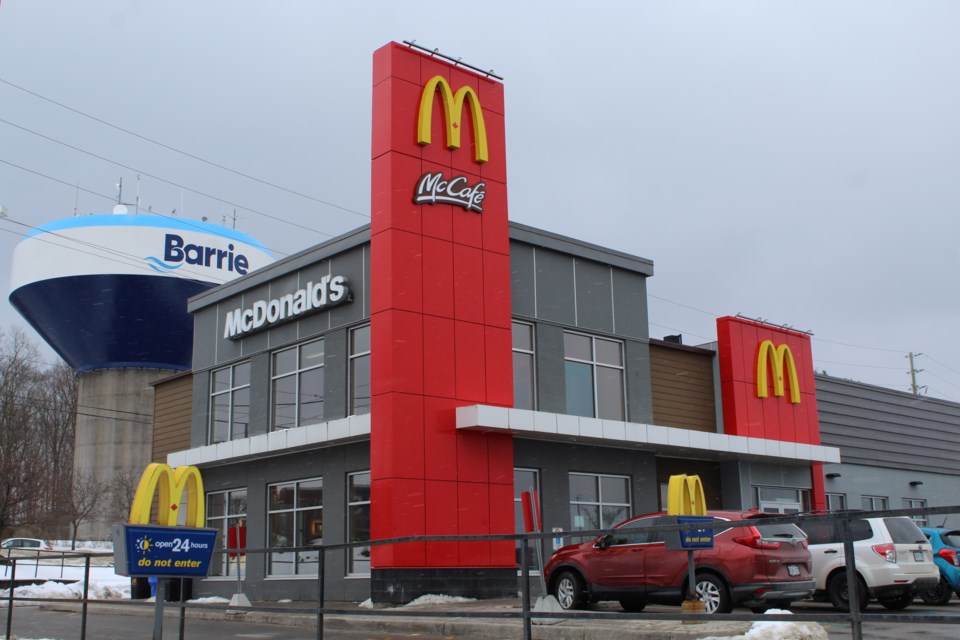 A Toronto woman has filed a civil lawsuit and a human-rights complaint against the owners of the McDonald's restaurant on Bayfield Street in Barrie. Raymond Bowe/BarrieToday

A woman who went to a Barrie McDonald's in November and left feeling humiliated is now going public with her experience, hoping she can prevent others from being treated the same way.

According to paperwork filed with the Ontario Human Rights Tribunal, Toronto resident Judith Sidlofsky has made a complaint concerning Glenn McKee, owner of the Bayfield Street fast-food restaurant, and his son, Trevor McKee, business development supervisor.

The complaint alleges discrimination based on age and disability to the tune of $75,000 and an additional civil lawsuit filed the same month is asking the courts for $400,000 for defamation in relation to an incident that occurred Nov. 1, 2019.

“The reason why Mrs. Sidlofsky is going public with her ordeal is because she is very troubled by the inexcusable treatment she received from the McDonald’s,” Nikolay Chsherbinin, legal counsel for Sidlofsky, told BarrieToday on Wednesday.

“Mrs. Sidlofsky was, at first, very reluctant to make the matter public because of the tremendous embarrassment and hurt she felt," he added. "Now, she is prepared to shed light on how she was mistreated in the hopes that McDonald's the institution and the specific franchise in question will impose and receive the training they obviously need to ensure that people are treated equitably, without discrimination and with respect.”

According to both the tribunal complaint and the statement of claim in the lawsuit, Sidlofsky, 76, attended the Bayfield Street McDonald’s with her husband, Dr. Barry Sidlofsky, on Nov. 1, 2019.

Sidlofsky suffers from a visible facial disability and disfigurement caused by cancer treatment.

According to Sidlofsky’s claim, when she attended the counter to request a refill on her coffee, staff denied her service.

“(Trevor) mocked and publicly insulted Sidlofsky, stating (verbatim) that she was homeless, eating from the garbage, bathing in the (washroom) sinks and was barred from the McDonald’s franchise,” reads the tribunal claim.

In the statement of claim for the civil lawsuit, Sidlofsky claims Trevor “accosted” her, yelling in a “callous and contemptuous manner.”

“When Sidlofsky attempted to inform Trevor he was mistaken, Trevor refused to listen to her and, instead, threatened to call the cops if she did not leave the premises,” reads the claim. “Sidlofsky was shocked and horrified by the respondents’ vitriolic and unprovoked insults and hurtful mocking of what she perceived to be her appearance and specifically her facial disability of which she is self-conscious. (She) felt embarrassed, deeply humiliated and discriminated against.”

“Trevor’s comments were deliberately hurtful and intended to (and needlessly did) cause Sidlofsky both severe humiliation and emotional distress,” reads the claim.

The claim also mentions Sidlofsky is now dealing with high-blood pressure and insomnia due to the incident. Since the incident, the claim outlines that Sidlofsky has become additionally self-conscious and is nervous about going out in public.

“She is questioning her own appearance and dress and was forced to undergo a shame-driven makeover, which further impacted her self-worth and self-respect,” reads the claim.

In addition to the monetary compensation, the tribunal filing also asks the tribunal to direct the respondents to develop a human-rights policy to be shared with all McDonald's franchises.

According to the statement of defence and a response to the lawsuit, the McKees claim the interaction went much differently than Sidlofsky’s version of events.

According to the response from McKee, Sidlofsky was served initially on Nov. 1, 2019 without incident. When she attended the counter to get a coffee refill, that was the first time he saw her.

“He believed that the applicant matched the description of an individual that had previously been told was banned from the restaurant,” reads the response. “The restaurant has ongoing problems with some customers stealing used cups or McCafe reward sticks from the garbage to obtain free products.”

“He did not yell and maintained both a respectful tone and volume during their conversation,” reads the response. “Further acting on the misidentification, he told Sidlofsky they had previously had trouble with her cleaning herself in the washroom and searching the garbage bins.”

The response indicates that, despite McKee telling Sidlofsky she would have to leave the restaurant, she was still provided with a refill and was never denied service.

“The couple returned to their table for approximately 15 minutes before leaving the restaurant,” reads the response. “McKee denies he made any comments that were based on the applicant’s age or disability in any way.”

McKee denies ever threatening to call the police, or calling Sidlofky homeless, eating from the garbage, a liar, low life or down-and-outer, which are also alleged in the original claim.

“The plaintiff was, at all times, treated in good faith and in an open, honest and forthright manner. Even for the few brief moments where she was mistakenly identified as a banned customer, she was treated with respect,” concludes the statement of defence.

In both cases, the response argues that it is improper for Sidlofsky to be filing both a human-rights complaint and a civil lawsuit over the same incident.

However, Sidlofsky’s lawyer disagrees, as he says the two bodies have different purposes.

“The civil defamation claim is a court action... that is limited to seeking compensation for the damages suffered to Mrs. Sidlofsky's reputation from the false statements made by the McDonald's employee in front of numerous patrons,” said Chsherbinin. “The human-rights application is brought before the Human Rights Tribunal to seek redress on the basis of discrimination with respect to services.”

Chsherbinin claims the McKees have now delayed the proceedings and are driving up costs, which is what has led to Sidlofsky approaching the media.

“Despite her age and health issues, the defendants have been delaying the progress of the action, which has forced Mrs. Sidlofsky to bring a motion to get them to move the matter along expeditiously,” said Chsherbinin.

“Many seniors, and certainly the homeless population, often lack an understanding of their legal and human rights. They are unsure of what can be done to help them to resolve situations like this,” he said. “Mrs. Sidlofsky hopes that her case can show that vulnerable people are willing and able to stand up for themselves and hopefully cause institutions to re-evaluate how they treat people and how to train their employees to treat people with respect.”

Trevor McKee did not return a request from BarrieToday for additional comment.