It's an effort to inform Canadians of the long-awaited Messiah foretold by all religions to unite mankind
Sep 14, 2018 10:00 AM By: BarrieToday Staff 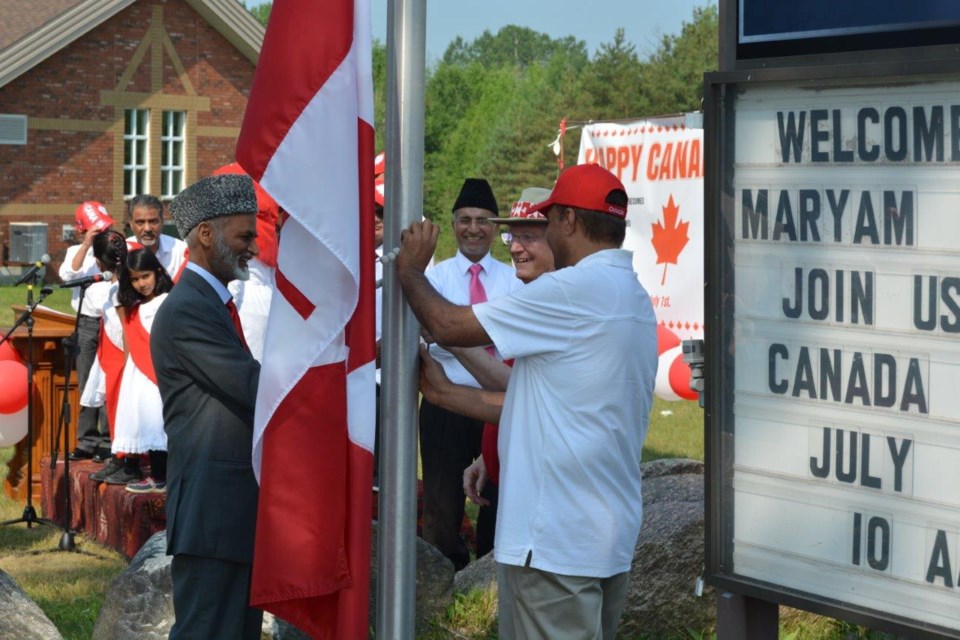 Officials raised the Canada flag at the first Canada Day celebration at the Maryam Mosque in Oro-Medonte. The mosque is joining a nation-wide campaign to educate Canadians about the Messiah.

NEWS RELEASE
MARYAM MOSQUE
*************************
On Sunday at 10 a.m. the Maryam Mosque, Ahmadiyya Muslim Jama'at, will be carrying out a large-scale flyer distribution campaign in Township of Oro-Medonte entitled The Messiah Has Come.

This unique nationwide campaign is designed to inform Canadians about the advent of the long-awaited Messiah and divine reformer prophesied by all major religions, whose purpose would be to unite mankind and bring peace on earth by bringing mankind back to God.
The campaign and its message come at a most pertinent time, as the world sits seemingly on the brink of global nuclear war of epic proportions, and is suffering through a pandemic of depression caused by an unprecedented mental health and spiritual crisis that the community feels is in large part due to the removal of God from modern man's life.
The Ahmadiyya Muslim Jama'at was founded in 1889 by Hazrat Mirza Ghulam Ahmad, who claimed to be the reformer prophesied in the Bible, Hinduism, Sikhism, Islam and other major faiths to appear in this era.
When: 10 a.m. on Sunday, Sept. 16, 2018.
Where: Maryam Mosque, 110 Line 7 South, Oro-Medonte, ON L0L 2X0
About the Ahmadiyya Muslim Jama`at
The Ahmadiyya Muslim Jama`at is a dynamic, fast-growing international Muslim community. Founded in 1889, the Ahmadiyya Muslim Community spans over 200 countries with membership exceeding tens of millions.
The Ahmadiyya Muslim Jama`at is the only Islamic organization to believe that the long-awaited messiah has come in the person of Mirza Ghulam Ahmad (1835-1908) of Qadian, India. The Community believes that God sent Ahmad, like Jesus, to end religious wars, condemn bloodshed and reinstitute morality, justice and peace.
*************************

Heading into the weekend, OPP offers some safety tips (VIDEO)
Jul 3, 2020 4:00 PM
Comments
We welcome your feedback and encourage you to share your thoughts. We ask that you be respectful of others and their points of view, refrain from personal attacks and stay on topic. To learn about our commenting policies and how we moderate, please read our Community Guidelines.