No public money in McCann's landmark sign, all to be fund-raised

There would be consultation with City of Barrie's public art committee and MacLaren Art Centre about sign’s location
Feb 22, 2021 10:48 PM By: Bob Bruton 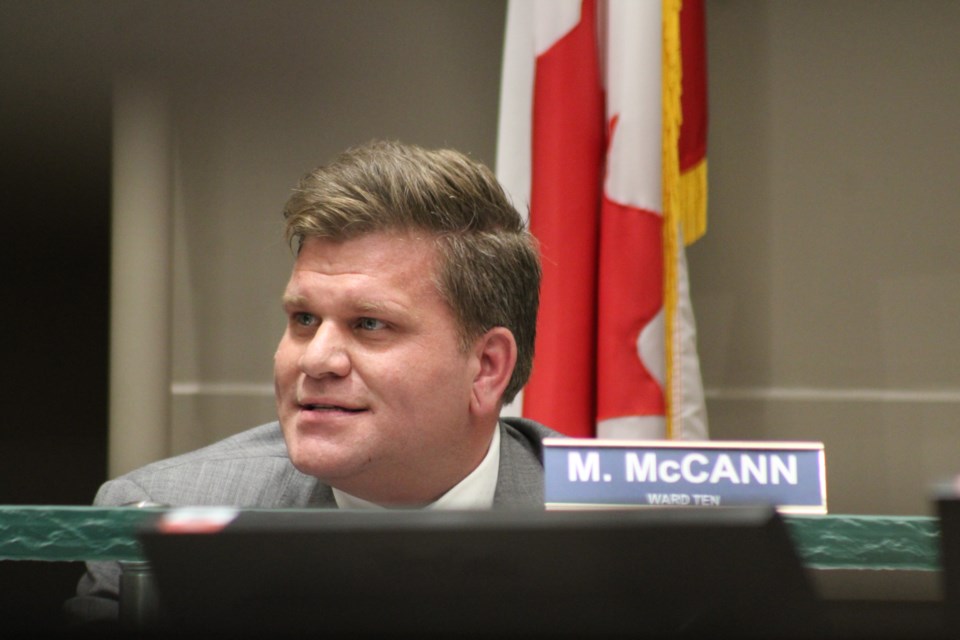 Councillors gave initial approval Monday night to a motion that city staff investigate the feasibility of procuring a landmark sign (‘heart icon’ Barrie) for people to pose with, and post on social media to bring the city together.

Coun. Mike McCann would be responsible for fundraising the money. He has already raised $50,000.

“This is definitely not an original idea,” he said. “And I think what works is that... the marketing and the branding is bold and simplistic. Part of the intent is to drive business to downtown Barrie, to inspire the city as a whole and I think Meridian Place should be the perfect location.

“I raised $50,000 is less than 12 hours and I’m already getting explosive interest in wanting to invest in this project,” McCann added.

His original intent was to use $150,000 of public money to pay for the sign, but that was changed Monday.

“My major concern with this was really a matter around the amount of public money,” Mayor Jeff Lehman said. “That’s been changed and so with the full amount fund-raised I think that’s a major improvement to this proposal.

“Now wouldn’t be the time in my opinion to be spending $150,000 of public money. I think this is a good approach in terms of funding it," the mayor added.

Coun. Gary Harvey said he thought the sign was a great initiative.

“Obviously, there was some initial concern around the funding sources behind it,” he said. “But when you look at it, we’re in the midst of a pandemic. Tourism is huge in our city and when you have a new legacy sign in a very prominent area I would highly suspect that we’re going to be attracting people that have probably travelled to other parts of the world and made sure that they had photographs with these other legacy signs.”

“Initially, I was not in favour of putting another sign up, because it seems to me that we’ve got plenty of signs and the city of Barrie really doesn’t need any more signs,” said Coun. Clare Riepma. “I’m coming round… a bit reluctantly, I must say.”

McCann said he thought the motion would have passed whether there was public money involved or he fund-raised all of it.

“It’s going to be digital, have a digital component, you can actually change the look of the sign,” McCann said. “It’s interactive and it’s going to support many if not all those in our community.

“It’s the excitement around the sign that I want to see.”

McCann said his sign is intended to unite Barrie — to help businesses by driving residents and visitors to the downtown and have them celebrate the city. Barrie doesn’t have a distinct landmark sign within its limits; other cities with one have done well promoting their businesses, he said, citing Ottawa, Kingston and Toronto.

He acknowledged the pandemic, but said Barrie needs to start thinking about recovery and doing what it can to encourage residents and visitors to shop local in the downtown.

McCann’s motion was an item for discussion on Monday’s general committee agenda.

It asked that city staff investigate the feasibility of procuring a landmark sign to bring the city together and encourage residents and tourists to capture memories and share them on social media.

The proposed sign would be bold and have Lake Simcoe in the backdrop; it would be six to 10 feet high and incorporate basic colours and effects so that the lights could be changed in recognition of special occasions. Staff would report back to councillors after this investigation.

Following completion of a competitive bid process, and once a preferred vendor is selected, a working group would be established, including Mayor Jeff Lehman and Couns. Robert Thomson and McCann, the vendor and city staff to select the sign’s final design, its location and installation timelines, with a goal of being ready by July 1, 2022, and report back to councillors by memo.

The sign’s cost would not exceed $200,000, with the total cost to be fund-raised by McCann in accordance with the city’s donation policy with assistance from the Downtown BIA, Tourism Barrie and the Barrie Chamber of Commerce, and that an update on the total money raised be provided to Barrie councillors with the report back from staff.

There would be consultation with the public art committee and MacLaren Art Centre about the sign’s location.

“I think it will be a great thing for Barrie, but I don’t consider it public art,” said Deputy Mayor Barry Ward. “In fact, we’d better not designate it public art.”

Lehman expressed concern that locating it in Meridian Place could take away from Heart and Horn sculpture already installed there, part of the Bob Hunter Public Art Project. It reflects Mr. Hunter’s passion for music and his chosen instrument, the trumpet.

“The Hunter family has just given the city $100,000 to have a piece commissioned and located in Meridian Place with a giant heart,” Lehman said. “Obviously, there were concerns that if this sign, especially if it had a heart, was located nearby… that would really detract from their very generous donation to the city and the work that was done to locate that piece.”

The landmark sign motion will be considered for final approval at the March 1 city council meeting.