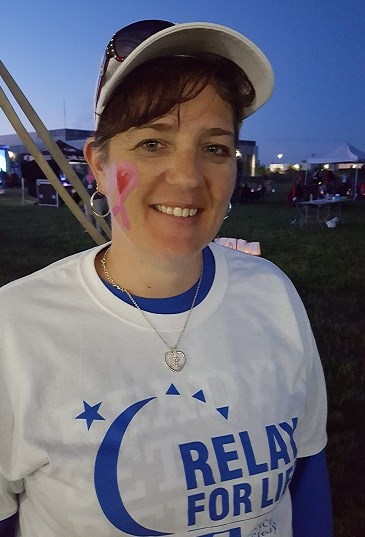 In 2015, Reed's mother-in-law was diagnosed with breast cancer and her father-in-law with prostate cancer in 2017. Fortunately, both are survivors and currently cancer-free.

As a supporter and caregiver to multiple family members, Deanne Reed learned first-hand how devastating a cancer diagnosis is and how it takes a terrible toll on the family.

Not long after she learned about her grandmother's cancer diagnosis, a co-worker invited Reed to join her new relay team, Source to Life. Reed felt it important to join the team as a show of support for her grandmother and to raise money for the Canadian Cancer Society.

She felt it was important to champion the cause and make a difference. The original team captain is now herself a survivor, so Reed is now the team's captain. Since the team's inception in 2012, it has raised over $13,000.

As well as through pledges, the team has held very successful yard sales, approaching friends and family for donated items. Two years ago, this yard sale took up four long driveways and raised $1,800 for their team.

Through lessons learned from her family experience with cancer, Reed has become more health-conscious herself, changing her diet to include more fruits and vegetables and less red meat.

She also tries to get more exercise by walking more, although with a full-time occupation and family commitments, she admits that this can be a challenge. Taking after her father, Reed has developed a passion for NASCAR racing, having been to Daytona and Michigan three times each and watches the races almost every weekend.

Ladies and gentlemen, start your engines!

Reed has recently been named Relay For Life Community Champion in the hopes of spreading the word through interviews with local media, giving speeches, and through other outlets, about the importance of the Relay For Life and encourage other cancer survivors and friends to join this year's Barrie/Orillia Relay which takes place on June 7 at 6 p.m. - midnight at Chappell Farms, just off Highway 11 near Barrie.

Registration is $15 and can be done online at relay.ca or at the Relay For Life Kick-off at Chappell Farms, May 1 at 6 p.m. The target this year is to have at least 45 teams registered, with a fundraising goal of $55,000.

Reed has a special message to pass along to new participants and anyone considering taking part:

"It is an amazing event that we put on, and the money does go to a good cause. The goal is to one day eventually have a cancer-free world, and the more people we can get involved, the more money we can raise to make that goal a little bit easier."

In 2018, the Simcoe-Muskoka Wheels of Hope transportation program provided: 9,895 trips to cancer treatment appointments for 403 clients in Simcoe County, 109 volunteer drivers drove 855,031 kilometres, ensuring that patients got to their cancer-related treatments both locally and in Toronto.

Catholic teachers return to bargaining table, strikes on hold
Feb 22, 2020 12:30 PM
Comments
We welcome your feedback and encourage you to share your thoughts on this story. We ask that you be respectful of others and their points of view, refrain from personal attacks and stay on topic. To learn about our commenting policies and how we moderate, please read our Community Guidelines.