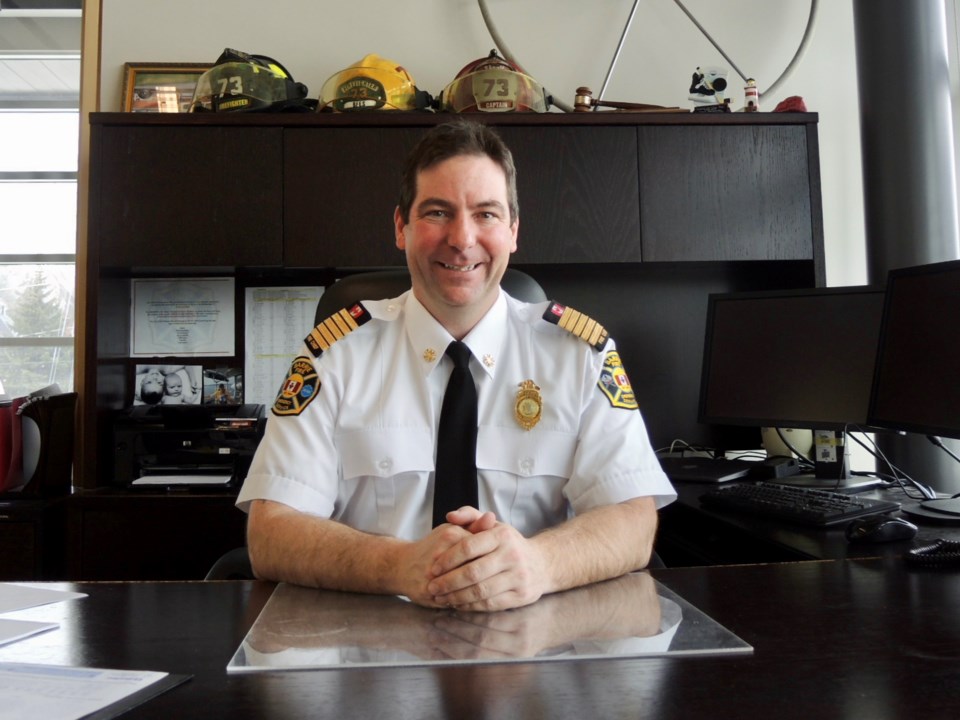 Barrie's new Fire Chief is bringing a 'new focus' to the fire department to be as proactive as possible. Cory Mainprize aims to create 'the most fire safe community we can' through the use of modern technology and redeployment of resources. Mainprize, 43, was recently named to the top job in the fire department after two years as Deputy Chief and more than two decades with Barrie's fire service.

Change is already happening at Barrie Fire and more is on the way, he says.

"The fire service has had a motto for years - '100 years of tradition, unimpeded by progress' - and that needs to change. We need to do things differently to be more effective," he said. "We're in an era of do more with less."

And that means firefighters traditionally involved in fire suppression, will be more involved in fire prevention. Starting at the end of April, Barrie Fire will begin a city-wide safety blitz with an aim to "touch every house," Mainprize said.

Right now, operational crews do After The Fire checks on streets where a blaze has occurred but that initiative is expanding.  When not responding to calls, crews will be assigned areas each shift in two to three hour blocks.

They will go door to door, offering inspections, information, advice - and possibly help to purchase smoke and CO alarms.

"We're actually going to prioritize the entire city based on historical data, probabilities, data that we mine from different sources and then start to check every single home in the city using the operational crews," explained the chief.

No one's going to get a ticket, says Mainprize, adding 'if they're in compliance we will shake their hand and tell them to enjoy their day.'  Part of the data includes when homes were built.

"It's going to be a new focus for the department to try and be as proactive as possible. That's truly the best way to provide the highest level of fire protection."

He adds, "It's a monumental goal to try and achieve but we're going to start chiselling away at it."

And by partnering with the Geographical Information System (GIS) department at city hall, the fire service can use technology to track its programs, their effectiveness and create a database. Crews doing the door knocks will be equipped with tablets to record all the information. And there's other new technology in play. The fire department recently purchased software that enables all equipment checks and vehicle checks to be done online. Other data is also being recorded electronically now and used to more effectively fight fires. The service collected data from the 200 'riskiest' buildings in the city including photos, floor plans, occupancies and sprinkler system connections.

"A lot of things that we used to have to do when we got there prior to engaging suppression activities, we can now in real-time access that data on the trucks during our travel times and answer some of the questions we need to know to make better decisions prior to even getting there," said Mainprize.

That group of 200 buildings includes high rises, facilities with hazardous chemicals and nursing homes - anything that can present challenges from a firefighting stand point and that are known as 'scary buildings.'

"We polled all staff and asked what are the buildings that when you hear the address come in, make the hairs stand up on the back of your neck. Because we all have them. Every city has them," he said.

Mainprize is a former union boss who comes from the 'suppression' side of firefighting. The married father of two young boys is a hockey dad who coaches his sons' teams and is an avid sailor with family time spent on the Mainprize's boat.

He's currently working on his Masters in Public Leadership through the Schulich School of Business at York University.

His firefighting career began with Caledon Fire in 1996 before he moved to Barrie in 2000.

His remembers his first fire in Barrie was at Livingstone and St. Vincent and says he probably could have been content to fight fires for his entire career.

But becoming a Deputy Chief opened his eyes to the chance to shape and lead the department.

"When you see those opportunities you certainly have to take them," he said.