Towers of 22 to 42 storeys have been suggested for properties on Bradford and Checkley streets; Residents hope plan can be scaled back
Nov 20, 2020 1:45 PM By: Bob Bruton 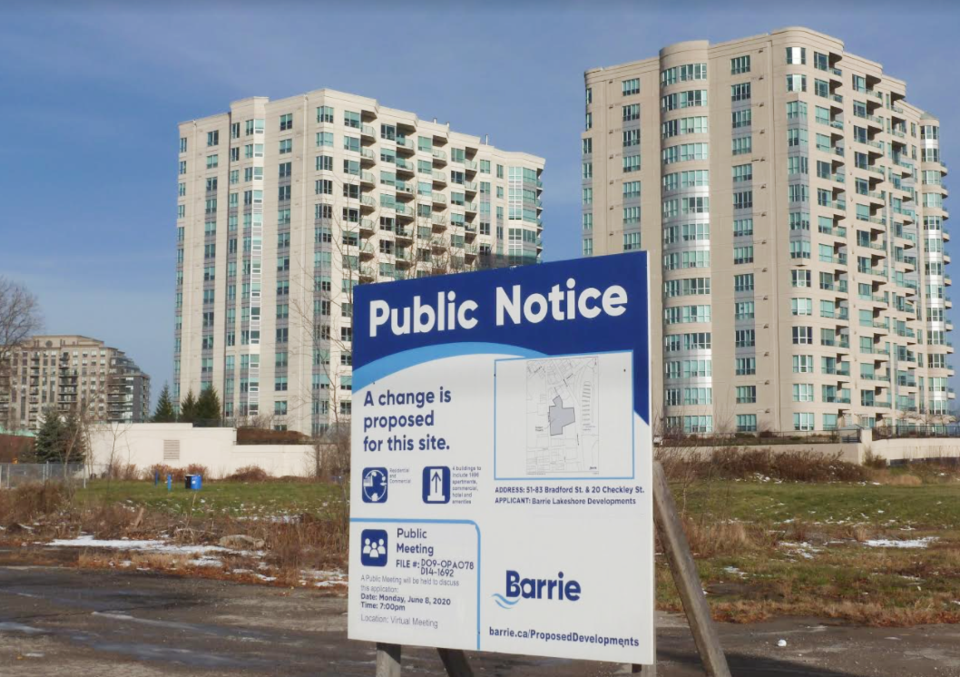 Concerns have been raised by neighbours regarding this proposed development at Bradford and Checkley streets in Barrie. Bob Bruton for BarrieToday

There’s no shortage of opposition to new highrise buildings in Barrie.

Case in point is 51-75 Bradford St. and 20 Checkley St., where four towers with approximately 1,900 residential units, commercial space, and potential hotel rooms are proposed. Towers from 22 to 42 storeys in height have been contemplated.

“The buildings are supposed to sit within the landscape of the neighbourhood. This thing doesn’t at all,” said Rod Burns, who has lived at nearby 6 Toronto St., at 16 storeys, for 18 years. “This far exceeds the density requirements of the city.”

Greg Main, who lives at 2 Toronto St., said all the neighbours have concerns about this project.

“We realize there will be development on the vacant land, but the height of two of the towers going in is troublesome,” he said, mentioning 30 to 45 floors. “Nothing in Barrie matches the heights involved and, in fact, I believe they (these proposed towers) all exceed the current height restrictions in Barrie (15 storeys).

“People have to respond to this. They have to call their councillors,” Burns said.

SmartCentres, on behalf of Barrie Lakeshore Developments (Greenwin Barrie and a numbered Ontario company), has submitted applications to develop a mixed-use project on this 8.6-acre property between Lakeshore Drive and Bradford Street near the city’s waterfront. A rezoning and Official Plan amendment are both required for this project to go ahead.

A site-plan control application has been submitted as Phase 1 of the development concept, which includes a 25-storey building fronting Lakeshore Drive for 145 hotel rooms and 230 residential units.

Coun. Keenan Aylwin, who represents this part of Barrie, says height should not be the greatest concern here.

“Whether a building is three storeys or 30 storeys, what really matters is good urban design to ensure the building adds to the character of the neighbourhood and doesn't feel too imposing as a pedestrian standing next to it,” he said. “More dense communities allow for us to use our existing infrastructure more efficiently, resulting in tax savings down the road.

Burns, 63, says area residents have not been heard to this point, however.

“I’m not against condos, I live in one, but I think this is setting a huge precedent,” he said. “There should be no cash in lieu of parkland on the waterfront, zero. Right now with those four buildings you’re blocking all of the sun coming across the waterfront in the afternoon.”

Main said towers of 16 to 20 storeys, with nine-foot floors including above-ground indoor parking, would blend in better with current structures in Barrie. He also expressed concerns about shadowing, traffic and parking.

“Depending on the season we (residents at 2 and 6 Toronto streets, and those using Barrie Marina) will lose sunlight between noon and three o’clock every day,” Main said. “Additionally, we believe the traffic flow onto Lakeshore Drive from the towers and hotel will cause a major strain on traffic flow between 7 and 10 a.m. and 2 to 4 p.m. in the afternoon. We also believe there is insufficient parking planned to accommodate the hotel and condos.”

Burns said the city still has options, however.

“They don’t have to allow it and… what’s the next step?” he asked.

There has been a neighbourhood meeting on this project, in December 2019, and a public meeting last June. City planning staff have said a report, with a recommendation on the rezoning and Official Plan change, would be in Barrie councillors’ hands before year’s end.

Four more towers proposed for downtown Barrie (10 photos)
Jun 8, 2020 9:39 PM
Comments
We welcome your feedback and encourage you to share your thoughts. We ask that you be respectful of others and their points of view, refrain from personal attacks and stay on topic. To learn about our commenting policies and how we moderate, please read our Community Guidelines.