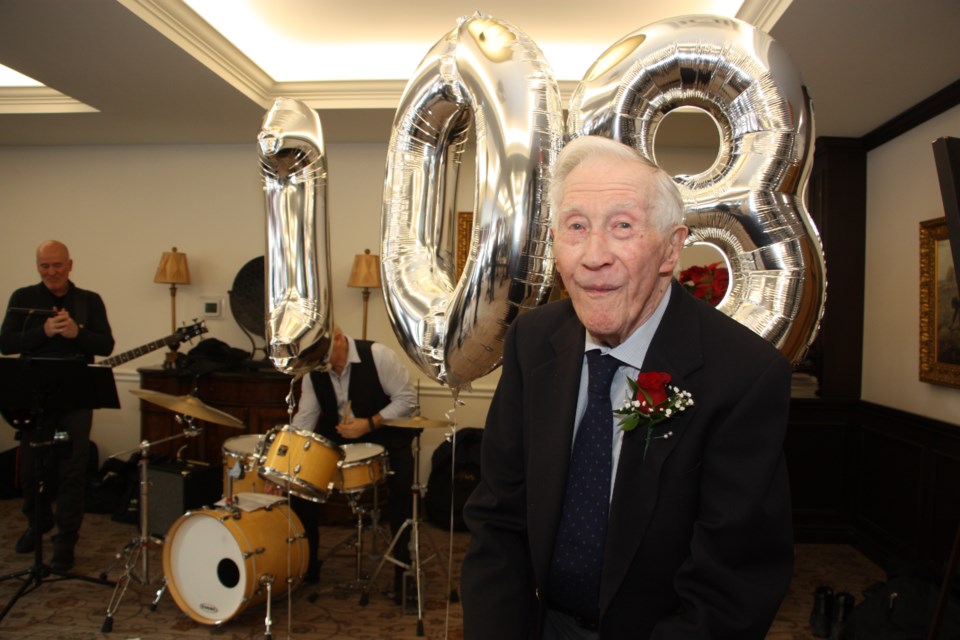 Gerald McCulloch celebrated his 103rd birthday Sunday with a party and live band at his home at Chartwell's Georgian Traditions in Collingwood. Erika Engel/CollingwoodToday

A Collingwood man celebrated his 103rd birthday Sunday surrounded by friends, and with a party featuring a live jazz band.

Gerald McCulloch spends his days now at his home at Chartwell's Georgian Traditions on Trott Boulevard, where he goes to the basement gym every morning and evening for his seven-minute exercise routine.

His life took him from the British Air Force to the Canadian Avro Arrow project and eventually to Collingwood with his wife of 64-and-a-half years.

He said he's always asked, 'what is the secret to long life?'

McCulloch was born in England in 1917. He was supposed to be born in Scotland, but he said there were fewer accommodations there, so his family went to England to live with a relative.

He joined the Air Force during the Second World War without telling his family.

"That was an interesting Christmas," he said.

He didn't get deployed, though, instead he moved around to different aircraft bases in Britain.

"I didn't even see a German," he laughed.

On two occasions the aircraft base where he was stationed was bombed.

"I heard a big bang and when I looked there were violent flames," he said.

After the war, he continued working on aircraft engines and apprenticed as a mechanic. He was offered a job in Canada on the Avro Arrow and moved to the country with his wife.

He said the cancellation of the Arrow project was a surprise for everyone who worked on it.

"It was a shock," he said. "People scattered everywhere after that. I was off for about six weeks, then I got called back."

McCulloch wasn't expecting to be called back, but the adjacent factory was still going to produce the engine meant for the Arrow.

"It was a shame. They had about half a dozen Arrows and they cut them into pieces for the garbage," he said.

But McCulloch managed to snag a few of the pieces as souvenirs of his work on the project. He said he's given them away since then.

While McCulloch was living in Toronto, he and his wife had a trailer in Mansfield where they would spend weekends. One day, on a break from the trailer, they drove to Collingwood for lunch and liked the town. They moved in after retirement.

"It's been pretty good since we came up here (to Collingwood)," he said.

McCulloch used to watch the ship launches at Collingwood Shipyards before the yard closed.

"It was a big issue, that," he said of the launches. "It was marvellous how they used to get those ships into the water."

McCulloch's wife died about six years ago, just shy of their 65th wedding anniversary. He celebrated his birthday yesterday with friends and staff at Chartwell's Georgian Traditions Retirement Residence.

Good morning, Barrie!
Jul 10, 2020 6:00 AM
Comments
We welcome your feedback and encourage you to share your thoughts. We ask that you be respectful of others and their points of view, refrain from personal attacks and stay on topic. To learn about our commenting policies and how we moderate, please read our Community Guidelines.