Charles Moulding once worked in Collingwood as an apprentice shoemaker, his military career took him to Ypres and Passchendaele, and to the hospital near Flanders' poppy fields
Nov 11, 2020 3:00 PM By: Doug Hethrington 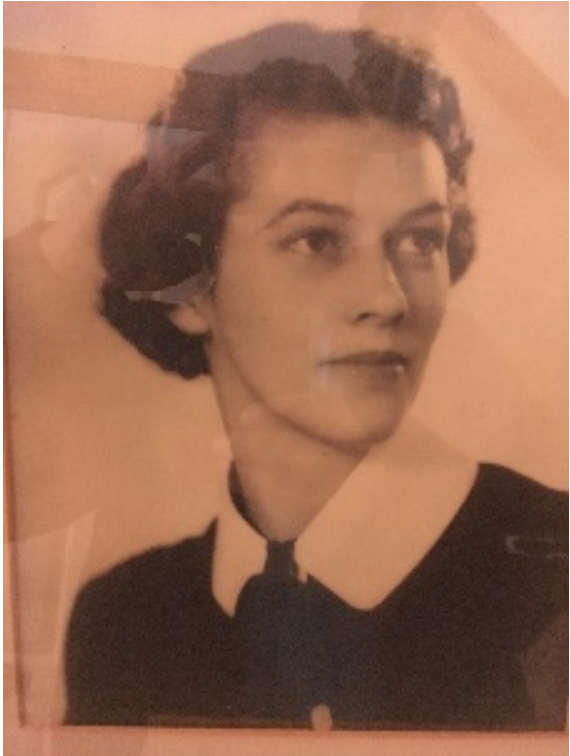 Charles Moulding's eldest daughter, Gwendolyn Heather Jean Moulding Dunnett Hunter, the one he sneaked off base to see a week after she was born. He suffered a formal warning and was docked five days pay for going AWOL. Contributed photo

The following story was written and submitted by Doug Hethrington whose family lives in the Meaford area. Hethrington is the great-grandson of Charles Moulding, who once lived in Collingwood where he was apprenticing under his father to become a shoemaker before the start of the First World War, which changed the course of his life.
************************

On this Remembrance Day, I invite you to consider Pte. Charles Moulding, 1st Battalion, Canadian Expeditionary Force (CEF), an apprentice shoemaker from Collingwood that history tried to forget.

Rowland Moulding Sr., his wife and eight children immigrated to Canada from England in 1886. The family settled in the tiny village of Weston, northwest of Toronto.

A cobbler by trade, Rowland Sr. and his eldest son Rowland Jr. initially worked as house carpenters. Charles was born in Weston on Aug. 4, 1894. The family soon moved to Parry Sound where Rowland Sr. set up shop as a shoe merchant.

Charles is listed as Rowland Sr.’s grandson in the 1901 Census. There is no mention of his mother.

By 1911, the family had resettled in Collingwood. Rowland Sr. installed himself as a shoe merchant, his son Sydney set up a shoemaking shop and 16-year-old Charles was learning the family trade as a shoemaker’s apprentice.

Charles, now working in Sarnia as an “oiler” for Imperial Oil enlisted on Aug. 10, 1914 with the 27th Regiment, St. Clair Borderers. On Sept. 14, he arrived in Valcartier army base in Quebec, where he was attached to the 1st Battalion, infantry, and began basic training.

On Oct. 3, the 1st Battalion boarded the SS Laurentic and headed to England.

The CEF was stationed on Salisbury Plain in southern England where they underwent rigorous training in what was described at the time as the worst winter Britain had faced in decades.

In early February 1915, the men of the Canadian 1st Brigade crossed the English Channel into France and soon found themselves in the trenches of the Ypres Salient.

By this time, the trenches were well in place along the Belgium border. Ypres represented the one bulge of land the Allies held on the Belgium side of the border.

Beyond its psychological significance, it was also a key geographical access point to the coast. If broken, the German troops would move north and encircle the Allied armies. For that much more important reason, Ypres had to be held.

On April 22, 1915, the German army released the first chlorine gas attack on the Western Front. The French Algerians on the Canadian left flank took the brunt of the initial gas attack and were decimated. The few surviving French troops fled the field in panic and terror.

A huge stretch of land, several kilometres wide and covered in dead and dying soldiers, lay to the Canadians left flank. The scene was so horrific that the Germans initially hesitated, which allowed the Canadians time to reinforce and dig in.

On the following day, the Germans unleashed their second gas attack. The Canadians, a motley group of citizen soldiers — accountants, clerks, railway men, farmers, Aboriginals and yes, a few lumberjacks, as well as one young shoemaker from Collingwood — while covering their faces with makeshift scarves soaked in their own urine, held the line under murderous machine-gun fire and poisonous gas.

The result of this harsh initiation into modern warfare was the decimation of the CEF 1st Battalion and the retaking of the trenches by the valiant Canadians.

Charles Moulding was gassed and shot in the shoulder. He was evacuated through the Main Aid station where John McCrae would compose his famous poem In Flanders Field a week later.

From the Boulogne Hospital, Charles was evacuated to a Convalescent Hospital in England, but was back on duty within three months. Complaining of feeling sick while on duty in July, Charles collapsed and broke his clavicle. A German bullet was still lodged against his collar bone.

Charles spent the next 10 months in various convalescent hospitals before being declared fit for duty and taken on by the 1st Battalion in May 1916.

On June 4, he married Daisy Pargetor of Banbury, England and arranged to send his pay to his new wife the next day and remove Rowland, his father as his benefactor.

A week later, he was back in the same trenches of the Ypres Salient fighting over the same blood-stained hills and craters in the Battle of Mount Sorel. On June 13, the last day of the battle, Charles was "blown from his trench by an exploding German mortar shell."

He lay unconscious for two hours before he awoke with a violent fit of vomiting. He was evacuated to England to the Sheffield Convalescent Hospital. He had headaches, a hearing problem, a concussion and contusions to his back that made sitting up difficult. He was later diagnosed with 'shell shock.'

Charles spent the next year recovering in another series of convalescent hospitals in England before being assigned to the Canadian Command Depot. He was declared fit for duty by a Medical Board hearing on July 17, 1917.

He went AWOL late on the night of Sept. 28, 1917, returning to the barracks at 4 a.m. on the following Monday, Oct. 2. He was docked five days pay and given a recorded warning.

Upon his return to base, he was taken on by the 1st Battalion for the Battle of Passchendaele. For the first time, Charles found time to write his will.

Charles’s military records go quiet at this time until he and his family reappear in November 1918 after the Armistice.

Charles survived the war and returned to Canada with his pregnant wife and child in March 1919 when he was promptly discharged from the army.

The family settled in Nickleton, near Sudbury, where Charles worked as an iron worker at the Murray Mine smelter.

On Nov. 28, 1924, Charles Moulding, the apprentice shoemaker from Collingwood, a survivor of the kaiser’s bullets and bombs and gas, met his match on a thin sheet of Canadian ice on Larder Lake. He and his friend Eli Tibb went through the ice. On Dec. 6, the Ottawa newspaper reported the incident stating that the two men left 16 children fatherless.

No one knows what happened that day. Maybe Charles’s hearing failed him, maybe his left arm gave out, maybe the PTSD made him panic. The bodies were never recovered and the men were presumed drowned. No gravestone or marker was ever erected for Charles.

After the fatherless Moulding family survived the winter alone, on March 4, 1925, the Ontario Provincial Police, under the direction of the Loyal Orange Lodge Kirkland Lake, removed the four eldest children and sent them to the Loyal True Blue Orange Home Orphanage in Richmond Hill.

On March 28, Daisy, the distraught mother, wrote to the orphanage pleading that she did not want her children put up for adoption and, God willing, she would get them back. The orphanage never replied and recently forwarded me the letters and photos they had withheld from the children.

The children were scattered to various foster families over the years, some to be rejected and returned to the orphanage. Their first names were changed and they were encouraged to forget their past.

Once again, on this Remembrance Day, I invite you to consider Pte. Charles Moulding, 1st Battalion, CEF, a man I never knew about before this month and a man history tried to forget. He was my great-grandfather. Lest we forget Charles! Lest we forget.