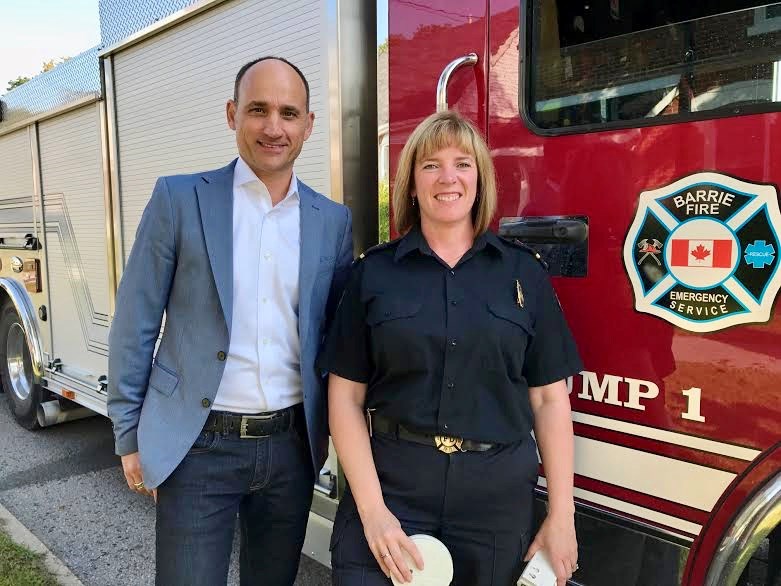 Love It Or List It host and local realtor David Visentin appears in a video with Barrie Fire's Samantha Hoffmann to promote the #RealEstateSmokeAlarmChallenge. Sue Sgambati/BarrieToday

Love It Or List It's David Visentin has been a realtor in the Simcoe County area for almost 30 years.

The host of the international smash HGTV show has thrown his support behind Barrie's Fires innovative social media safety campaign called #The RealEstateSmokeAlarmChallenge.

"As realtors we go through hundreds and hundreds of homes every single year. Imagine every home we went into had a proper smoke alarm in it," Visentin says in the video.

"Here's a challenge for all realtors. Every home you list or buy, you make sure it has a proper smoke alarm and CO alarm. We could save lives."

Hoffmann states in the video that most fires occur in homes where people feel the safest.  She outlines the simple steps to ensuring your smoke alarms are up to snuff.

"Check the date. See that it hasn't expired and then push the button and  Hear those alarms ring," Hoffmann said.

The Ontario Association of Fire Chiefs challenged all fire chiefs over the Christmas holidays to take a smoke alarm challenge.

But this is a new approach for Barrie Fire.

"To the best of my knowledge this is the first time we've used social media to actually challenge an organization to commit to doing something," said Hoffmann in an interview.

The video was recorded last fall while Visentin was filming the #WellConnected video for Fire Prevention Week.

Others from Barrie and the GTA have followed.

"We're just looking at any way possible to find ways to get smoke and carbon monoxide alarms checked. We know that realtors are in homes all the time where we traditionally are not in homes unless there's a problem. So if we advocate them and get them to be the eyes and ears on the ground it means a lot more safer homes," Hoffmann said.

"The Canadian Real Estate Association is forecasting 486,000 homes will sell in 2018 and just the idea of the possibility of 486,000 homes with working smoke and CO alarms, it gave me hope," said Hoffmann.