Springwater Township resident retiring from policing after 30-plus years on the beat
Jul 2, 2020 7:30 AM By: Mehreen Shahid 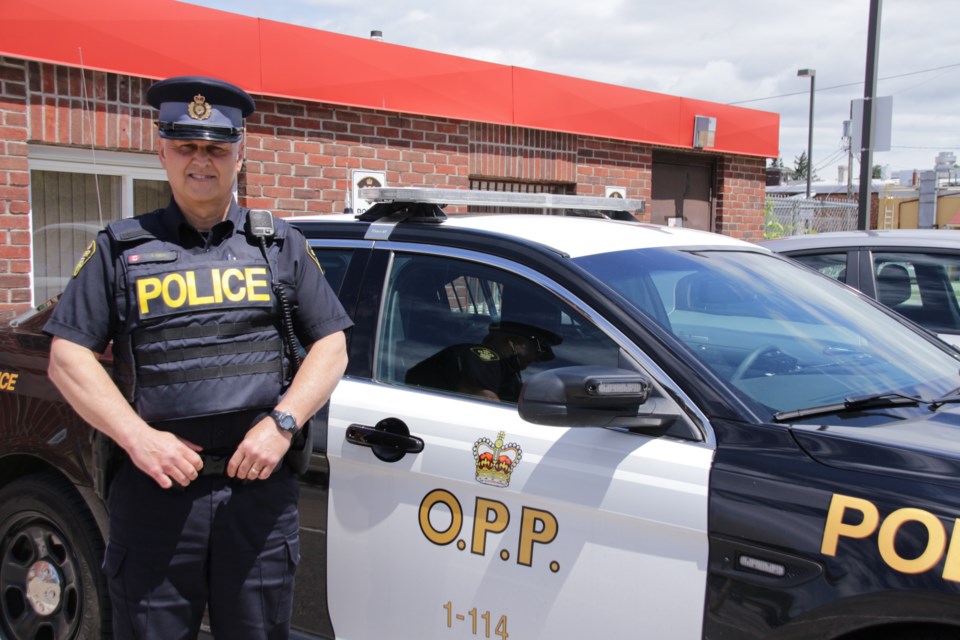 Ontario Provincial Police Const. Stephen Finch, who has worked in the Penetanguishene community for most of his 30-year career, is retiring at the end of July. Mehreen Shahid/MidlandToday

Stephen Finch would go out on a call role-playing his next steps to ensure he had a plan of action when he got to the scene.

But what happened in August 2006 caught the Penetanguishene OPP constable off-guard.

Finch says the Sunday night in question had been a busy one.

"We'd dealt with a fairly major occurrence and some people had been arrested," he recalled. "My fellow officers had taken some of them to our detachment on Highway 12 to process."

He had then stopped at the Tim Hortons on Main Street to take care of an outstanding family dispute. As Finch pulled into a parking spot outside the building and was getting out of his cruiser, a van pulled up next to him.

"The driver was very animated, saying his baby wasn't breathing," he said. "I went over to the car and could see (the mother) had an infant in her hands and the child was turning blue. The mother had a panicked look on her face.

"I immediately went around to her side and took hold of the baby and began performing CPR."

Finch said he radioed for an ambulance at the same time, but the dispatcher said it would be 10 minutes before it arrived.

And since he was the only one qualified to perform CPR, he made a quick decision.

"I threw the dad the cruiser keys and said, 'Let's go, you're driving'," said Finch. "He began driving toward the hospital with the lights and sirens going and I was still performing CPR on the infant."

He said it seemed like all the signals were green, so they made it to the hospital in good time.

"I ran in with the baby in my hands and they were already waiting for me in the hospital and directed me to where I should go," Finch said.

The girl is now alive and healthy and thriving years after he was at the right place at the right time. But this incident has become one of the most impressionable events of Finch's 30-year career, which is concluding at the end of July.

"The parents call Steve a hero, to which I can only say amen," said Brad Saunders, chair of the Penetanguishene Police Services Board, which recently made a virtual presentation honouring Finch. "It's a wonderful comment on you and your career. (Steve) will be sorely missed by his colleagues. My only regret is I can't be there to shake his hand."

For Finch, policing had never been the career that came to mind when he thought about where he was headed in life.

"There's nobody in my family that's a police officer," he said, adding his motivation came in his late-20s.

"I was just working out with some guys who were police officers," said Finch. "Just listening to them talk about what policing was all about sounded like it was a profession that appealed to me."

At that time, he'd been working at Molson Brewery, helping in the production of beer. Policing was the exactt opposite of that, he noted.

He started his career with York Regional Police and nine years later moved to the OPP, coming to Penetanguishene through the Southern Georgian Bay detachment.

"Getting out in the community was interesting," Finch said about the new career, adding what appealed to him most was that it gave him a chance to be out and about and respond to a variety of situations.

"Looking back, it's gone by fast," he said of three decades in policing. "You take assessments at different points in time and it seems like it may not be moving fast, but at the end of it you look back and it's gone by fast."

It's been satisfying and rewarding, said Finch, a Springwater Township resident and father of two adult sons.

"The things you get exposed to can be fulfilling and satisfying, sometimes traumatic and upsetting, but satisfying," he said. "I've developed some good relationships with people in the community."

One of the upsetting incidents he recalled happened five years into his career.

"I pulled a little girl out of a pond; she had gone through the ice," Finch said. "She died. She didn't make it. That was hard."

As upsetting as it was, he said, there was an eerieness around the situation because there was panic that she was missing, but there were no witnesses to give officers any information to help locate the girl.

Personally, Finch said, he deals with tough situations like this one in various ways.

"Fitness is a big thing in my life," he said. "That allows me to move on."

As well, Finch said, "I have a great family and loving wife — probably the most patient woman in the world. And talking to your peers about such incidents also helps."

He said it takes a certain kind of personality to make a good cop.

"I think people with personalities that are just middle of the road make for good police officers," Finch noted. "You have to have good common sense. Keep calm in situations and treat people with respect. And realize that you don't have all the answers, but rely on people around you to share situations to come to the common outcomes."

Looking at his counterparts south of the border, he says there's definitely work to be done in Canada, but the police force is different in a few ways, such as having a special investigations unit.

Southern Georgian Bay OPP Insp. Andrew Ferguson, who was also attending the police services board meeting, said he was honoured to be part of the presentation.

"When I think about Steve, and everything he has done for the town of Penetanguishene, a few words come to mind: pride, professionalism and policing with honour," said the detachment commander. "He's compassionate and very fair police officer. I sleep very well when I know Const. Steve Finch is patrolling the streets of Penetanguishene."

An avid skier, Finch said, he is now looking forward to enjoying swooshing down the hills at Blue Mountain after retiring.

Twins tackling 16-hour swim to make waves for mental health
Aug 13, 2020 7:15 PM
Comments
We welcome your feedback and encourage you to share your thoughts. We ask that you be respectful of others and their points of view, refrain from personal attacks and stay on topic. To learn about our commenting policies and how we moderate, please read our Community Guidelines.