Group has 'taken advantage of the spirit of third-party advertising rules, citizens say
0
Oct 5, 2018 11:30 AM By: BarrieToday Staff 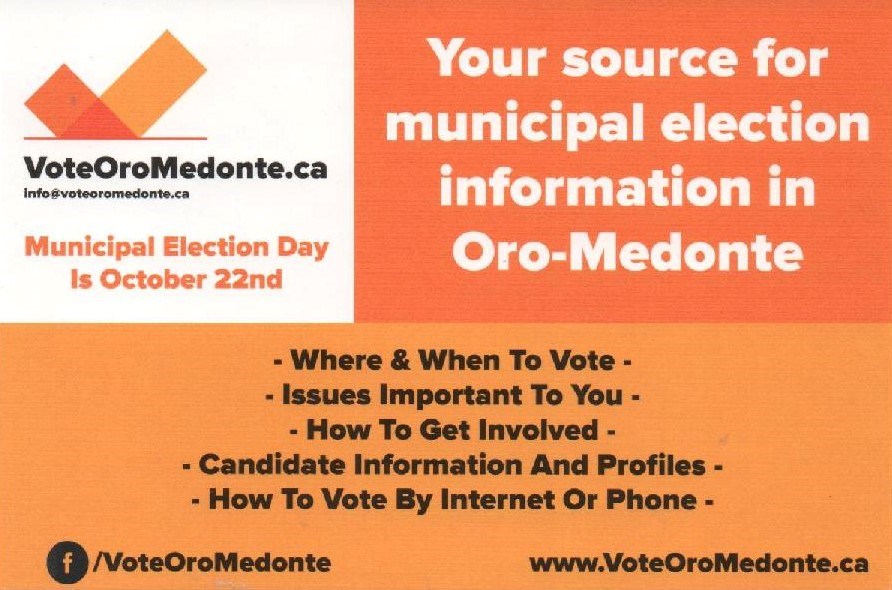 Voters in Oro-Medonte Township received this card in their mail box recently. It's part of The Friends of Oro-Medonte effort to 'help the residents ... find out information about the upcoming election.'

BarrieToday received the following letter from three Oro-Medonte residents in response to a recent story about the deputy mayor alleging 'dirty politics' on the part of the Friends of Oro-Medonte, a registered third-party advertiser.

I am writing today as a very concerned citizen of Oro-Medonte who has been following and trying to understand the third-party advertising rules in the current election and in particular as they apply to the Friends of Oro-Medonte group.

I was made aware of the Friends of Oro-Medonte website (voteoromedonte.ca) in early September. I found the site, although helpful in the aspects of where and how to vote, very concerning due to the use of ‘recommended’ and ‘not recommended’ candidates.

I wanted to understand how this group, who at that time would only identify as a numbered company, came to formulate their recommendations. I posted to them on their Facebook page and was given a vague answer as to their process and was advised that the folks behind the company were a matter of public record.

It took digging and the efforts of a number of people to gain a copy of the article of incorporation to ascertain who the principals of the company were. I was not satisfied they had done their due diligence in talking directly with candidates. Over time, it has become apparent that this group has not met with a number of the candidates to help formulate their recommendations.

Mr. Groen, the president of the Oro-Medonte Chamber of Commerce, stands firm on his not having a conflict of interest. That it is his right as a private citizen to affiliate himself with a third-party advertiser. This is factually correct.

But what Mr. Groen fails to comprehend is that he is in a leadership position that spans our entire township and impacts businesses and residents alike. His lack of foresight in aligning himself with this third-party advertiser is alarming. He and this third-party group are now back peddling in only now publishing names of directors and making statements such as “the intent was to get people’s attention and it worked.”

The intent appears to me to be to ensure that there are like-minded councillors and a mayor who will help this special-interest group achieve their goal. This group has worked behind the curtain until concerned citizens got angry and started calling them out. They have taken advantage of the “spirit” of the third-party advertising rules and have pushed the boundaries. The claim that they have backed away from recommending candidates is useless. The horse is out of the barn. A mailer to 7,000 residents has already been delivered.

My other concern is that up until Sept 22, Mayor Harry Hughes had recommended this particular third-party advertiser on his campaign Facebook page as well as his Twitter account. Mr. John Crawford, mayoral candidate, also had recommended the group on his Facebook page. These have since been removed. Both candidates had these recommendations on their social-media sites for over a month. This is a direct conflict with the Municipal Act.

There are many, many residents of Oro-Medonte that are very alarmed, upset and, in some cases, downright angry with the activity of this particular third-party advertiser that appears to constitute campaign interference.

Traffic complaint leads to impaired charge in Essa
Apr 1, 2020 6:19 PM
Comments
We welcome your feedback and encourage you to share your thoughts on this story. We ask that you be respectful of others and their points of view, refrain from personal attacks and stay on topic. To learn about our commenting policies and how we moderate, please read our Community Guidelines.