'We are so far behind in terms of what was anticipated and it is now having major fiscal implications on the city,' mayor says regarding 'slow pace of development' in Salem Secondary Plan area
Jan 13, 2021 9:00 AM By: Bob Bruton 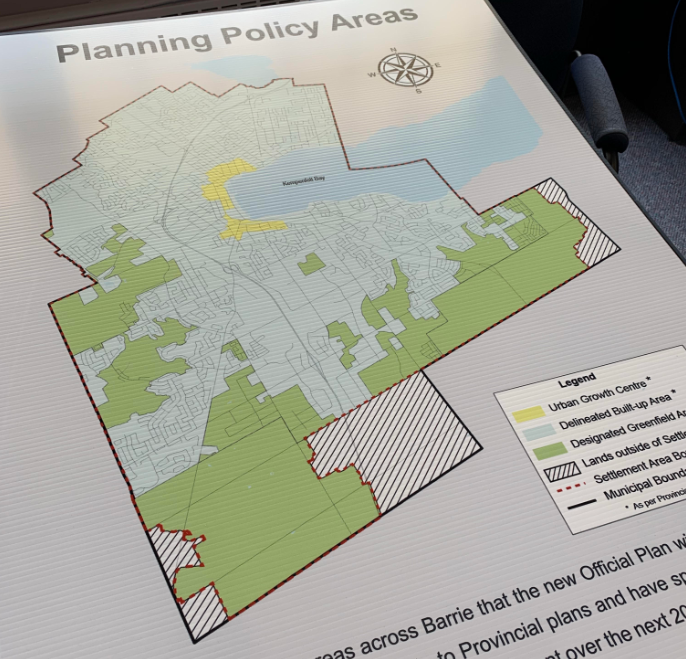 This map shows the secondary plan areas in the City of Barrie's south end. Raymond Bowe/BarrieToday

A temporary sanitary pumping station and forcemain project to service a huge future residential development in south-Barrie has been flushed back to city staff in an attempt to negotiate with landowners there about their inclusion.

Council decided Monday night to refer back a motion to authorize a construction, maintenance and operation agreement with Watersands Construction and Wormwood Developments for the station and main on land within the Salem Secondary Plan Area, at the southwest corner of McKay Road and Veterans Drive, which currently has approval for a draft plan of subdivision of more than 1,500 residential units.

Coun. Gary Harvey, who proposed the referral, said it would only delay matters for a few weeks as the project would be before councillors again in February.

“This is just solely to provide a little bit more time for staff to have an opportunity to speak with these other two parties, who apparently have not been able to be engaged in this process,” he said. “The spirit behind this referral motion is just to provide a little more time to have some discussions to hopefully come to some type of resolve that all three parties are somewhat happy with.

“Because realistically, I think if all three parties walk away thinking nobody’s won, then it’s probably a good deal.”

Council passed the referral motion by a 6-5 vote.

“We have all heard, over the past year or two, major concerns about the slow pace of development in the Salem Secondary Plan in particular,” he said. “We are so far behind in terms of what was anticipated and it is now having major fiscal implications on the city. Our DC (development charges) reserve funds are falling into deficit, our ability to construct the new infrastructure at the time of development is now constrained, and we’re seeing that in the capital plan that's in front of us next week as part of the budget.

This project would also provide a temporary sanitary sewage servicing solution for other land within Salem, subject to confirming capacity and the contribution of a pro rata share of the cost of the project by other landowners.

H&H Capital Group, which is also developing land in Salem, said through its lawyers that it wants to be part of the servicing plan.

“H&H is fully supportive of moving forward with the project to facilitate interim servicing, and seeks assurance from the city that the project is not a site-specific solution for one landowner over an extended period of time,” Cassels Brock & Blackwell LLP wrote in a Jan. 6 letter to the city.

Darren Steedman of DG Group, representing Watersands/Wormwood, said it has been working for years on this solution and preferred it not be delayed because other developers want in on the servicing.

“Now, those neighbours who were all so quiet on the sidelines for so many years are now asking, forget about the past, and all our hard work, and simply give them some of our capacity,” he said. “That’s not a fair proposition, in my opinion.”

“My client is ready to participate and pay their proportionate share for the proposed interim solution. To date, this offer from my client has not met with any co-operation or willingness from other parties,” he said. “This was never discussed among the landowners group.”

This project isn’t identified within the city’s infrastructure implementation plan as being a cost-shared item to be built by the Salem Landowners Group. Therefore, it would be constructed solely by landowner Watersands/Wormwood at its sole cost, and not subject to reimbursement through development charge credits or other means — so the agreement would be solely between the city and the landowner.

Watersands/Wormwood would be required to permit other landowners to connect to and utilize the services associated with the project. Such permission to connect cannot be unreasonably withheld by the landowner.

This agreement would also require the landowner to share flow monitoring data and hydraulic modelling with other Salem landowners so they can conduct their own investigations with respect to servicing capacity made available by the completion of the project.

The permanent sanitary sewer solution for the Salem area, the McKay-Huronia sanitary sewer, is not currently anticipated to be completed until 2027, as outlined in the city’s proposed 2021 capital plan. Expenditures associated with it would be confirmed in capital plans approvals by council in subsequent years, subject to the availability of funding.