Knowledgeable bat proponent defends the 'ninjas of the night' 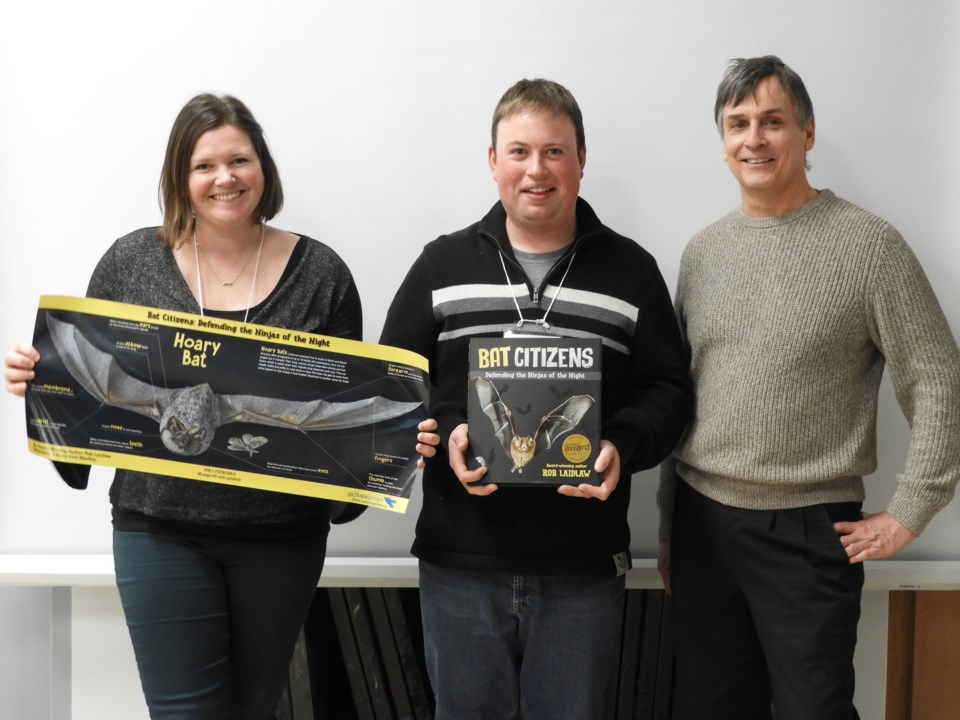 On Jan. 8, the Orillia Naturalists heard Rob Laidlaw make a pitch for the much-maligned bat.

Laidlaw, a good, knowledgeable and passionate speaker, is a veteran of animal advocacy worldwide, and author of several award-winning children’s books promoting animal advocacy, including Bat Citizens – Defending the Ninjas of the Night.

He held the attention of the adult “children” in the room as he spun his story about his own journey from vague awareness of bats, to admiration for the 1,300 species of bats in the world today.

Probably because of their rather scary appearance, people have trouble liking the creatures, but Laidlaw pointed out how intelligent they are – able to echolocate, memorize their way into and out of very long caves, and recognize locations and people.

As well, their peculiar physiognomy is exactly what provides them with the tools to fulfill their ecological role in their habitat. For instance, echolocating bats have large ears for use in picking up echos, some have noses that are also large and mobile so that they can direct the sounds they make, their wings are not just membranes, but rather are comprised of muscle, blood vessels and connective tissues, their feet are constructed with tendons that can “lock” in place to allow them to hang upside down with no expenditure of energy (they have very low fat stores), and many have a tail membrane they use to help sweep up their insect prey and hold it basketed while they eat on the fly.

People are generally unaware of the huge benefits that bats provide – from controlling insects that otherwise would destroy crops, to pollinating flowers that only bloom at night, as well as dispersing seeds.

For instance, in rain forests fruit-eating bats are particularly valuable in reseeding deforested areas by depositing their seed-laden feces. The world would be a poorer place without bats.

Speaking of misconceptions, although vampire bats do exist in the tropics in relatively sustainable numbers, they prey on animals, rarely humans.

In our country, rabies is feared, but the truth is very few bats get rabies, and the disease kills the bat. If you handle a bat, do so with gloves.

Laidlaw's wrap-up message: Learn more about bats. To do so, visit website of Bat Conservation International “batcon.org”. You, too, may come to admire them.

The next meeting of the Orillia Naturalists'  will be on Feb. 5 at 7:30 p.m. at the Orillia Museum of Art and History. It will feature David Hawke, an OrilliaMatters columnist, speaking about the Wildflowers of Simcoe County – the beauty of our local flora.
********************