It looks ridiculous, acts silly and is a key part of the ecosystem

The woodcock, also known as a timberdoodle, are back in the region and ready to nest, says outdoors columnist
0
Apr 22, 2019 7:00 AM By: David Hawke 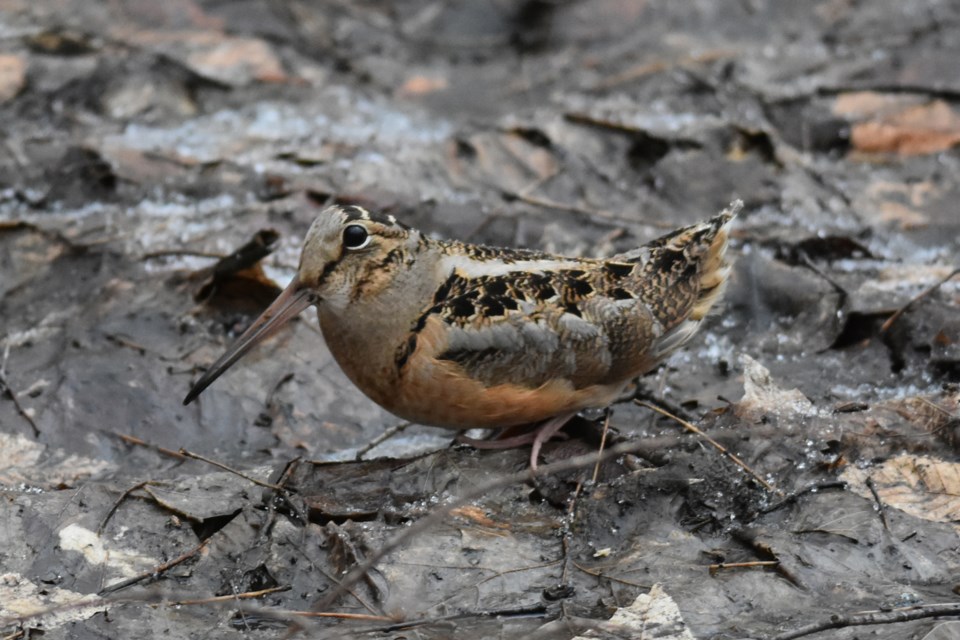 The 'timberdoodle' more commonly known as the woodcock is an important part of the ecosystem. David Hawke/OrilliaMatters

While the name 'timberdoodle' may sound wacky, it somehow seems to fit the bird whose moniker it is. Timberdoodles, also known as woodcock, look ridiculous, act silly and yet are such an important part of the ecosystem.

Having spent the winter months scouring the mudflats of Louisiana (where they are called mud-suckers), they are back in our neighbourhood and they are ready for nesting.

Just as hummingbirds, kiwis, and penguins are classed as birds, woodcocks share their challenge of coming across as a bird.

When it flies it flutters, when it feeds it shoves its very long beak deep into the soil, about the only thing on its menu is earthworms, and when it tries to attract a mate it ends up attracting the attention of both males and females, as well as numerous human birdwatchers.

Trying to describe a woodcock becomes a verbal task: "well, they're kinda dumpy looking, like a soft toy football, only with no neck. And they wobble when they walk, except for the head, which stays still.

They have a beak as long as their body that is used for probing into the soil, except if the soil is frozen or too hard, then they pick grubs from under fallen leaves. And when they fly they tend to go straight up, like a helicopter."

Should you get to have a close look at one (lucky you), you will no doubt notice that the woodcock's eyes are set quite high on its head, directly opposite each other on the sides of the head, and tend to 'bug out'.

Without turning its head, a woodcock can see 360 degrees around itself as well as everything from directly overhead to just about under its belly. The eyes are set so far up that its ears are actually in front of the eyes. Weird, just plain weird.

Their feathers are superbly designed to match the dead leaves of a woodland floor, so about the only time you will see one is either if you accidentally scare it, or you visit their peenting grounds. Yes, that's right, peenting grounds.

When woodcock attract a mate, as they do in April, they gather in open fields that have a few shrubs scattered about. Starting at dusk, the male says, rather loudly, "Peent!".

This is immediately followed by an incredible aerial display as he flies straight up into the heavens for a few hundred feet, then drops back to earth is a series of dives and loop-the-loops. Landing beside his heart's desire he then says, "Peent?".

M'lady woodcock may, if suitably impressed, invite the suitor over for a quick visit. If unimpressed she may either wait for an encore performance, watch another suitor, or fly to another field in hopes of catching a better act.

Apparently the males also do the circuit each night, performing in a series of fields on any given night, so he may have a second chance to impress that fickle girl.

Many of these fields are monitored by woodcock watchers, people who record the number of calling males and get to see some exciting flying maneuvers.

This species, which is officially classed as a shorebird although it nests in the forest, is steadily disappearing from our landscape. As usual there are a number of factors at play, including habitat loss, soil contamination, and migration hardships.

Research in eastern Ontario revealed that lead levels within woodcocks were quite high, due to their preference of eating worms, which burrow through the soil, which has been subjected to lead fallout from air pollution. Talk about your canary in the mineshaft.

And this is where woodcocks, and the surveys that track them, come into play. If their population is crashing, then something is amiss. And if something is amiss, then sooner or later we humans are going to suffer the same fate.

Remember the gulls and Peregrine falcons and their links to DDT in the environment; now think woodcocks and their relation to soil and air pollution.

To end on a brighter note, the woodcock are back despite the frost barely being out of the ground. One fluttered up from our streambank and landed on the remnant snow under the distant apple trees. As it scurried along the crust it looked like a red squirrel, so always double check anything that moves.

During mid-April the woodcock perform most evenings and some mornings in many local fields. Even if you can't always see them, their distinctive "peent" often gives them away.

Bursaries available for women going into trades: 'Business is booming'
May 29, 2020 7:00 PM
Comments
We welcome your feedback and encourage you to share your thoughts. We ask that you be respectful of others and their points of view, refrain from personal attacks and stay on topic. To learn about our commenting policies and how we moderate, please read our Community Guidelines.