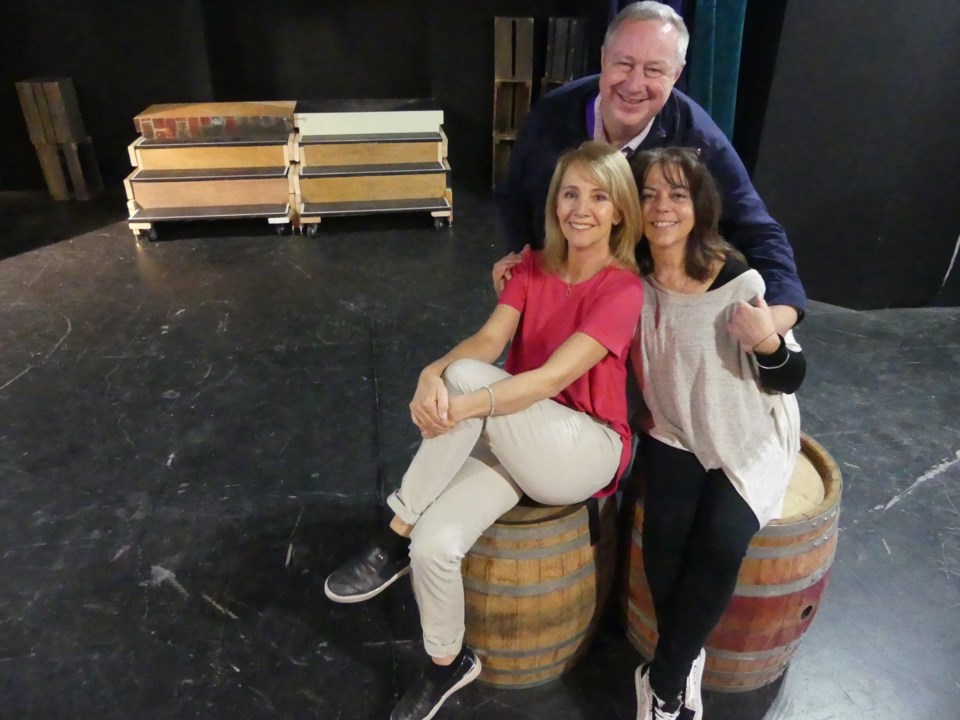 If you ask Jenny Landry what it is like to follow in the footsteps of legends like Carol Channing, Barbra Streisand, and Bette Midler, she is blunt.

“It’s overwhelming. It’s so fun, but it’s challenging,” she said, with a big smile.

Landry stars in the title role in South Simcoe Theatre’s upcoming production of the classic musical Hello, Dolly! from May 2-19 in Cookstown.

“There’s so many icons who have done it. I have to bring my own thing to it,” she said. “It’s one of the roles I’ve wanted to play forever.”

And for actresses over the age of 50, many roles are for grandmothers, not characters like brassy, strong-willed matchmaker Dolly Gallagher Levi, she said.

The musical, set in 1890, follows the story of Dolly as she travels to Yonkers, N.Y. to find a match for a miserly bachelor before considering a match for herself.

Of the local cast of 14, Landry is the only person not changing roles throughout the play.

“The cast plays many, many parts,” she said.

With original productions of Hello, Dolly! — on Broadway, and a 1969 movie starring Streisand that won three Oscars, including Best Score of a Musical Picture — there can be dozens more people on stage between the chorus, dancers, and waiters.

But South Simcoe Theatre, which has called Cookstown Town Hall its home since 1983, only has so much space in the old building.

Kernohan points to the wooden seats in the old temperance hall. “The seats are so hard so you don’t want to drink,” he quipped.

This means all set changes will happen under the lights and right in front of the audience with cleverly placed vaudeville-esque crates and barrels anchoring the look on stage, she said.

“To make it look like a $1-million production using these modest pieces,” she said. “That’s the challenge of doing this musical — doing it in a space like this.”

While Hello, Dolly! would also typically have a full orchestra, Kernohan will have a band sitting in a section above the audience at the back of the room, providing all the music.

Jerry Herman, who wrote the music for Hello, Dolly!, is not as well-known as other composers, “yet so many iconic musicals are written by (him),” said Kernohan, citing Mame and La Cage aux Folles (remade into The Birdcage starring Robin Williams and Nathan Lane in 1996).

Hello, Dolly! is a musical that still holds up today, he added.

“It’s fun and beautiful, and the music is catchy. Some musicals today aren’t like that,” he said.

Anyone checking out the local production of Hello, Dolly! can expect to be entertained from start to finish, Collins said.

“What we think of a fluffy musical — there’s a lot of heart in there, too,” Collins said. “The music is great, we have a terrific cast, we have a beautiful concept, we have a wonderful team working on this show.

“Right from the top of the show, to the end, it will be a wonderful piece of entertainment for the audience.”

LETTER: RVH president asks for patience as hospital prepares for next stage
May 28, 2020 8:00 PM

Beausoleil First Nation expands restrictions in wake of unwanted beach visitors
May 28, 2020 6:30 PM
Comments
We welcome your feedback and encourage you to share your thoughts. We ask that you be respectful of others and their points of view, refrain from personal attacks and stay on topic. To learn about our commenting policies and how we moderate, please read our Community Guidelines.