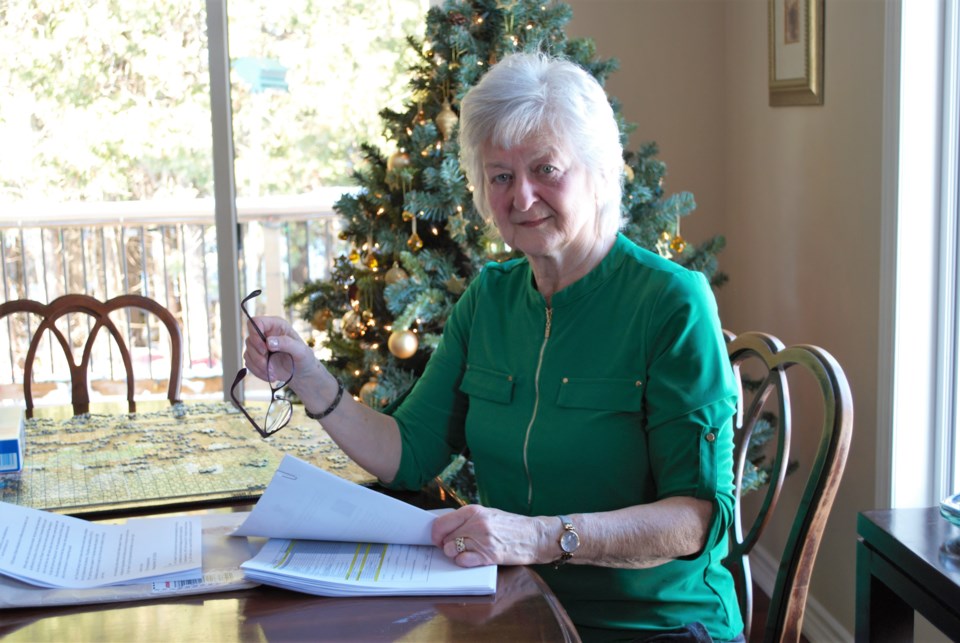 Bonnie Emms sits in her Wasaga Beach home poring over her paperwork from the $100,000 syndicated mortgage investment she and her husband made on the Collier Centre property. Jessica Owen/BarrieToday

This is the second story in a two-part series on Collier Centre. To read the opening story, click here.

Bonnie Emms was planning to retire at 70.

Now, at 72, she’s still working and there’s no end in sight.

Emms is one of 14,000 people across Canada who invested in syndicated mortgages for properties run by Fortress Real Developments through Fortress-owned mortgage affiliates, some of which have now filed for bankruptcy.

She and her husband invested $100,000 of their retirement savings in the Collier Centre project in 2012. Now, the fate of their money is up in the air.

“I didn’t even know what a syndicated mortgage was,” said Emms. “You could almost say it sounded too good to be true.

"In 2012, I was 66 and thinking I was going to retire. When this (opportunity) came up, that was going to be my retirement. After 2008 happened, my RRSPs dropped... and I had started to panic," she added. "When I saw this opportunity I thought, here was a chance to get some of my money back.”

Emms lived in Barrie all her life. Back in 2012, she was working in Mississauga.

“My boss down there introduced me to a friend of his who had decided to get his mortgage broker’s licence. As we talked, he told me about different investments he was getting into,” Emms said. “He told me about this great project.”

After a few months of talking back and forth with the mortgage broker, Emms invited him to come to her house to discuss the Collier Centre project in downtown Barrie.

“I did a lot of research on this project, because it was a lot of money,” Emms said. “(At the time), the city was going to lease one floor, and a bunch of lawyers were going to lease another floor. I checked out the builder, Mady Developments Inc., and they had 40 years of experience all over North America. They were solid. I signed the papers because it all felt solid.”

Emms says the president and CEO of Fortress Real Developments, Jawad Rathore, even came up to Barrie to talk with her about investing.

“He assured me that everything was going to be good,” she said.

A syndicated mortgage is where two or more investors invest in one specific mortgage. Typically, they involve investors becoming the lender to a developer for up-front costs to build a project, such as a condominium.

“I’m confused, honestly. There are so many players here. My mortgage broker was working for FMP (Mortgage Investments Inc.),” she said.

According to Emms, nothing seemed amiss at all for the first two years after signing the papers. She says she received her interest payments on her investments for those two years.

After that, the payments stopped.

Mady Development sold the Collier Centre property to Fortress Real Developments in 2015, before declaring bankruptcy in 2016, leaving more than $54 million in unpaid debt.

“Everything fell apart when Mady declared bankruptcy. When it happened, we talked with our mortgage broker and he said everything was going to be good, Fortress was going to look after us,” Emms said.

Emms says she would call every few months to get an update from her broker, whom she says assured her every time that everything was going to be fine.

“By the end of 2016, I was realizing that it wasn’t looking good. The broker was calling me less and less,” she said. “He eventually told me he dropped his licence, so he wasn’t going to be able to help me anymore.”

At that point, Emms and her husband decided to sell their Barrie home and move to Wasaga Beach, because they couldn’t afford the cost of living in Barrie anymore with their investment money tied up in the Collier Centre.

She managed to get in contact with a Toronto lawyer who had helped other investors who lost money in the Collier Centre. Emms says that lawyer got her in touch with the RCMP, who are currently investigating Fortress for fraud. She spoke to them in October.

Now, Emms has no idea who to even speak with to get information on her investment.

“Can I put this in my will? There’s a lot of questions I have,” she said. “Who do I speak with? My mortgage broker has disappeared into thin air. I don’t know anybody else involved in this. Where do you turn? Who even has the money for a lawyer at this point?”

Emms is a member of a Facebook group Investors of Fortress Developments and BDMC, where people who have invested in Fortress developments meet to share information on their investments, as it is nearly impossible to find elsewhere. The group has more than 100 members.

“We’re all trying to support each other, but nobody has any answers,” said Emms. “At least now we have some other people to talk to.”

Emms feels a certain amount of shame about the investment, looking at it in hindsight.

“I’m the first one to look at some of these stories in the paper or on TV about things like sending BitCoin from here to there and everywhere and I think, ‘Oh God, how could you be so stupid?’

“I’m going to come across as one of those people now,” she added. “I was the one making the financial decisions (for my husband and I). I feel badly about what I’ve done.”

Andrew (he asked that his real name not be used), an Oro-Medonte Township resident and a police officer with an Ontario force, also has his life savings tied up in Fortress-owned developments.

He was alerted by his residential mortgage broker to low-risk investment opportunities back in 2013. Andrew knew his broker personally as her husband was also a police officer.

“They didn’t target stupid people. They targeted people who were very smart, had good jobs and careers, high people in society. Doctors, lawyers, police officers... I even know of one guy who was a lieutenant-colonel in the armed forces. We’re talking about people who are wise people and well-respected people in society,” he said.

“I still feel ashamed. I don’t know how this is going to end for me. Am I going to get all of my money back? Some? None? I don’t know. My two projects are still on a go-forward basis.”

At first, Andrew invested in a syndicated mortgage in one Fortress-owned property, Charlotte Adelaide in Toronto.

“I had a bunch of money that I had wanted to put into an RRSP. The money had come from work, like a sick bank thing, and I wanted it tax sheltered,” he said.

While Andrew says he initially only wanted to contribute about $30,000 into his Fortress syndicated mortgage investment, when he looked at his RRSP account after signing the papers, he says he discovered Fortress had taken $52,000.

After meeting with Fortress about the error, Andrew says Fortress convinced him to invest the entire amount, taking the additional $20,000 and putting it toward The South Shore property in Keswick.

“The way it was sold to me – and I think everybody – is... you’d be a fool to not want to invest; it was so lucrative. This was a no-brainer. You were investing on real properties and developments. Back then, there was a big condo boom, especially in the Greater Toronto Area (GTA),” Andrew said.

“There were no risks ever explained. If there were, it was so brushed under the rug and buried in the paperwork that you would never have seen it. There was huge sales pressure.”

While Andrew concedes that he was given the option of independent legal advice, Fortress provided the lawyer and the advice was provided from off-site on speakerphone while representatives from Fortress were in the room.

“I look back, and I don’t know why light bulbs didn’t go off in my head. That should have been the clue. But you’re so into it at that point, and you’ve spent 30 minutes talking about how great these projects are,” he said.

Andrew says he suspects that the number of people who have definitively lost money as a result of these investments is small. He says most of the investors are currently being held in a sort of limbo, where if the projects they invested in do get sold by Fortress to other developers, they could still have a chance at getting their money back.

“I also fall into that category,” he said. “The two projects that I’m invested in are still on a go-forward basis.”

His concern is that the negative press being given to Fortress as well as the RCMP investigation into them being made public could have negative consequences when it comes to selling the buildings affiliated with the name.

“It really hinders the ability to sell these things and get these mortgages discharged and get us our money back because it creates a negative public perception of these projects,” he said. “The more rumours swirl around that this was a scam, it dilutes the perceived value of any of these construction projects.”

Fortress Real Developments did not respond to a request for comment on this story from BarrieToday.

According to the Globe & Mail report, the RCMP are still investigating Fortress, but have laid no charges in the case. On April 13, 2018, officers in its Integrated Market Enforcement Team, which investigates major frauds, had secured warrants to search Fortress’s head office, along with those of BDMC and its affiliates.

Investigators are still combing through electronic documents and emails seized in the April search.

There are almost 50 Fortress projects with outstanding syndicated mortgage loans worth more than $700 million.

When reached for comment from BarrieToday this week, Wine confirmed that one of those lawsuits is in regards to the Collier Centre property.

“It was the first class action we started,” said Wine. “We’re waiting for a decision from the Court of Appeal. It was argued back in June so it should be out anytime.”

While Andrew says he supports the RCMP investigation into Fortress, he’s leery of how the investigation will actually help existing investors.

“I know, as a police officer, that even if the investigation is concluded, and charges are laid, and convictions are substantiated, in the end that is not necessarily going to get us a dime back. So what do we stand to gain from the criminal probe?” he asked. “Our only chance now to get any of our money back is for these projects to be sold to other developers or builders to get them to some stage of completion.”

For Andrew, hindsight is 20/20, and he says he would never make an investment like this again.

“Compared to what a lot of other people have invested in these things, (what I invested) is chump change. I get that. But it doesn’t reduce the significance for me, being a young person. These are my life savings,” he said.

“For the past year and a half (since) I have been paying very close attention to everything, as have a lot of investors,” added Andrew. “Everyone is scared they’re going to lose everything.

“Investors are grasping onto the little hope they have left."