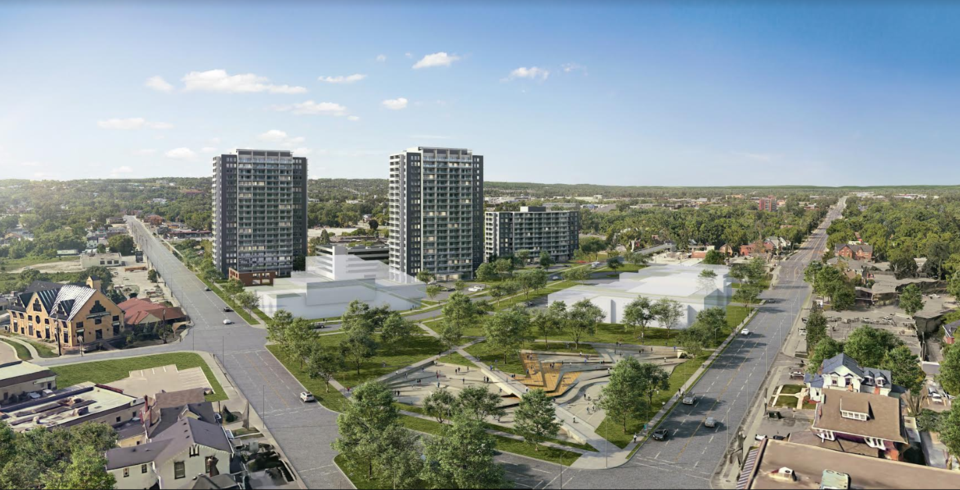 This rendering shows what the mixed-use development could look like once completed at the former Barrie Central site downtown. Image supplied

A project that's expected to change the face of downtown Barrie overcame one of its final hurdles on Monday night.

The Waterloo-based company is building a multi-use development at the former site of Barrie Central Collegiate and neighbouring Prince of Wales elementary school. The properties include 34-50 Bradford St., and a portion of 125 Dunlop St. W.

YMCA Simcoe-Muskoka is also building a new multi-million-dollar facility at the site to replace its Grove Street location.

As a member of the YMCA board of directors, Coun. Ann-Marie Kungl declared a potential pecuniary interest and did not vote on the zoning-bylaw amendment.

Coun. Sergio Morales called the HIP plan a "critical-mass" project that has the potential to impact to the neighbourhood around it.

"It will be the catalyst for revitalization in our (downtown's) west end on Dunlop Street," Morales said.

"This could be a building that, decades from now, people will look back at this council and staff and the develop involved and say they got it right," Morales added.

Mayor Jeff Lehman called it a "very significant project for the community" and "a major step forward."

The approval does not include the city's plans for the former Fisher Auditorium, which was saved during the Barrie Central demolition.

For some, a residents-only Innisfil Beach Park has been a dream
May 29, 2020 6:33 PM
Comments
We welcome your feedback and encourage you to share your thoughts. We ask that you be respectful of others and their points of view, refrain from personal attacks and stay on topic. To learn about our commenting policies and how we moderate, please read our Community Guidelines.