Hawerchuk finishes final round of chemo in cancer battle 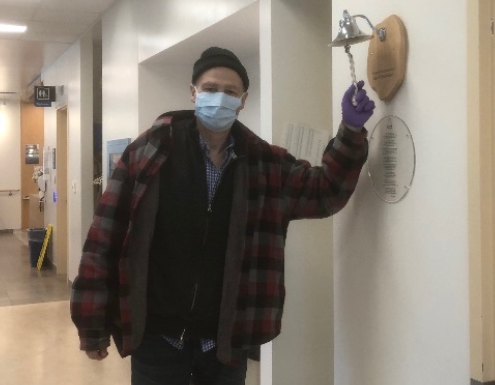 Dale Hawerchuk rings the Bell of Hope after completing his final round of chemo. Twitter photo

Barrie Colts head coach Dale Hawerchuk, who has been battling stomach cancer, took a big step in his treatment on Monday.

"Today, my dad finished his final round of chemo protocol in Barrie," Hawerchuk's son, Eric, posted on Twitter Monday evening. "Got to ring the 'Bell of Hope' on his way out.

“We hope this is the end of a long journey, but he’s ready for anything," Eric added. "Thanks to everyone who has reached out. Means the world to us. Thinking of you all."

News of Hawerchuk's cancer diagnosis came in October, a month after the Toronto native had taken a leave of absence from the Barrie Colts for unspecified health reasons.

Last fall, Hawerchuk told TSN he suffered from acid reflux symptoms in the summer and doctors found a tumour in his stomach in late-August.

The 57-year-old Hockey Hall of Famer has coached Barrie since the 2010-11 season and is the longest-serving coach in franchise history.

As an NHLer, Hawerchuk had 518 goals and 891 assists in 1,888 regular-season games with Winnipeg, Buffalo, St. Louis and Philadelphia. He was inducted into the Hall of Fame in 2001.

Warren Rychel was announced as the Colts interim coach, but he was let go by the team in January and replaced by longtime assistant coach Todd Miller.