Have you met Chris? He's REALLY into Halloween

Looking for something wickedly scary to do this Halloween while supporting the Simcoe Muskoka Regional Cancer Centre at Royal Victoria Regional Health Centre? Dunnett’s Dark Lair – a home Halloween display that will fright and delight visitors of all ages.
0
Oct 27, 2015 5:13 PM By: Robin MacLennan 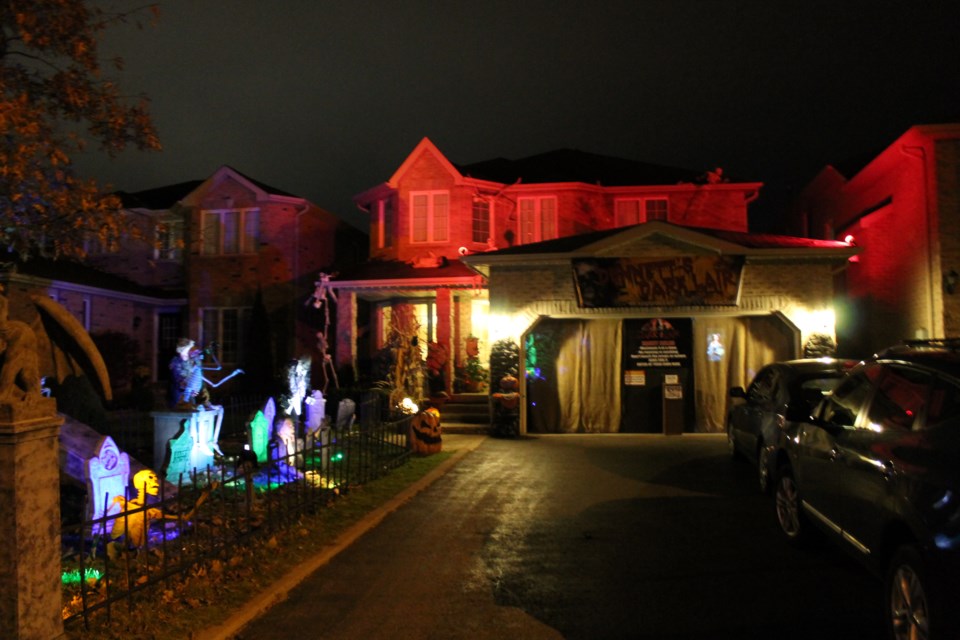 Dunnet's is the place to be this Halloween.

Chris Arnott is spooking things up again this year at his Dunnett Drive haunted house.

Barrie's haunter is busy transforming his garage into a haunted motel inspired by a visit to Disney World in Florida.

"I was inspired by the Haunted Mansion and the Tower of Terror at Disney, as well as from movies and other haunters," Arnott explained.

"I do it for the love of the holiday, the love of halloween. It's something the kids can look forward to and it creates a community spirit."

Halloween is a big deal to the Barrie dad, who plans all year and builds for months to get his lair ready for visitors. Earlier this year he travelled with a few fellow haunters to a Halloween show in St. Louis Missouri in the US.

"Scaring people is really fun," he says. "It's a big thing across North America, especially in the States where they hold conventions for the Halloween industry and haunters."

It's the 8th year that Arnott has haunted his neighbourhood and he promises the the spook factor has been stepped up a notch this year - with sounds, music, lighting and interactive displays. He describes his theme as spooky, without gore.

"There will be some scares here, that's for sure," he said. "We have all sorts of things to jump out and scare you. I like to keep it kid-friendly for the little ones and spooky for the adults as well."

Donations to the cancer centre at RVH will be accepted at this intensely scary attraction which won the 2012 Canadian Haunters Association award for ‘Best Canadian Garage Haunt’ and Arnott has been a finalist in many contests over the years.

"I wanted to do something for my community and RVH is my hospital, so this made sense," he said.

The transformation doesn't happen overnight, and although it is all about one or two nights of fright, Arnott started planning in February and building in August.