Got a funny feeling about what you're about to do?

Always follow your gut, says Barrie 12-year-old who was recognized by the Attorney General
Jun 7, 2016 2:00 PM By: Sue Sgambati 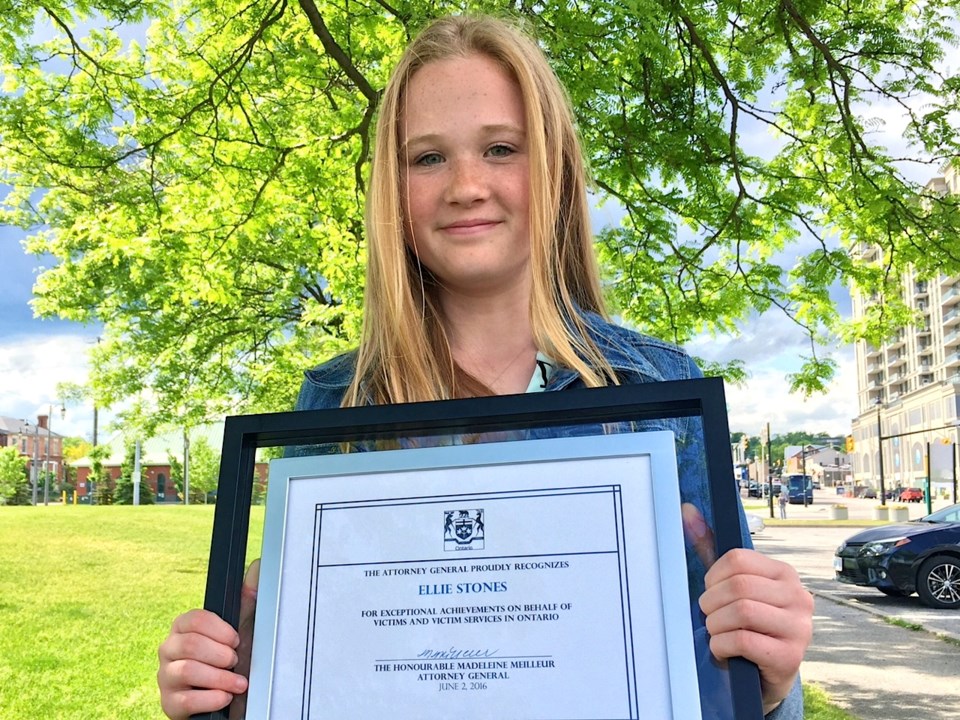 It's not every day that a 12-year old girl gets a special shout out from Ontario's top cop.

The mature young girl is among the recipients of the 2016 Victims Services Awards of Distinction handed out recently at Queen's Park.

"I was really happy, overwhelmed. I was really excited," said Ellie, a grade seven student at West Bayfield Elementary School.

Ellie got to go inside the Ontario legislature, which was "really cool" and meet the Attorney General, Madeleine Meilleur.

"Oh my gosh it was the best thing ever," gushed Ellie. "She gave me a special shout out after she shouted me out. It was awesome meeting her because she's a big deal.  She's awesome."

"It was incredible. She's made us all really proud," said Ellie's mother Shannon. "She sort of lit up Queen's Park as well when she was there."

Ellie is motivated by her own personal traumatic experience and now tries to share her wisdom with other children to keep them safe.

She got involved with the Barrie Police Service and stars in "Ellie's Safety Tips", a TV show that teaches children what and what not to do when faced with potentially dangerous situations.

She plans to deliver her safety messages to local schools this fall.

Her advice to children is simple: follow your gut.

"That is like, God's whisper," said Ellie. "He whispers telling you when something's wrong and I think you should always follow your gut. So when I start going to schools I'm going to tell them to follow your gut it you feel like something is wrong, follow that, you know your gut is always right."

The Child Advocacy Centre of Simcoe Muskoka located in Orillia was also honoured with the Victim Services Awards of Distinction.

Founded in 2014, the child advocacy centre focuses on creating a safe and neutral place for abused children and youth to tell their stories.

Sgt. Valerie Gates of the Barrie Police Service sits on the Board for the Advocacy Centre and was thrilled at the recognition.

"The work they're doing there is amazing," said Gates.  "I'm just happy that it's getting recognized by other people."

In announcing the award, the province said the Centre's multidisciplinary, child-friendly approach has had a tremendous impact on community response to child abuse and neglect.

It's the only child advocacy centre in Ontario to offer abuse prevention programming and over 15,000 children and youth have taken part in its education programs.

"We use it quite often with our investigators," said Gates. "It's just a nice safe neutral place that they can go to. It's a nicer environment (for abuse victims) when they're going through such a horrible thing."

The Awards were handed out during National Victims and Survivors of Crime Week. ​

Get your scarecrows out on the lawn in Midhurst
Aug 3, 2020 4:00 PM
Comments
We welcome your feedback and encourage you to share your thoughts. We ask that you be respectful of others and their points of view, refrain from personal attacks and stay on topic. To learn about our commenting policies and how we moderate, please read our Community Guidelines.