Although wild pigs have not established a self-sustaining population in this part of the province, wildlife expert says it would be 'great pig habitat,' with its mix of intense agriculture, woodlots and forested river banks
Feb 20, 2021 7:00 PM By: Leah Gerber 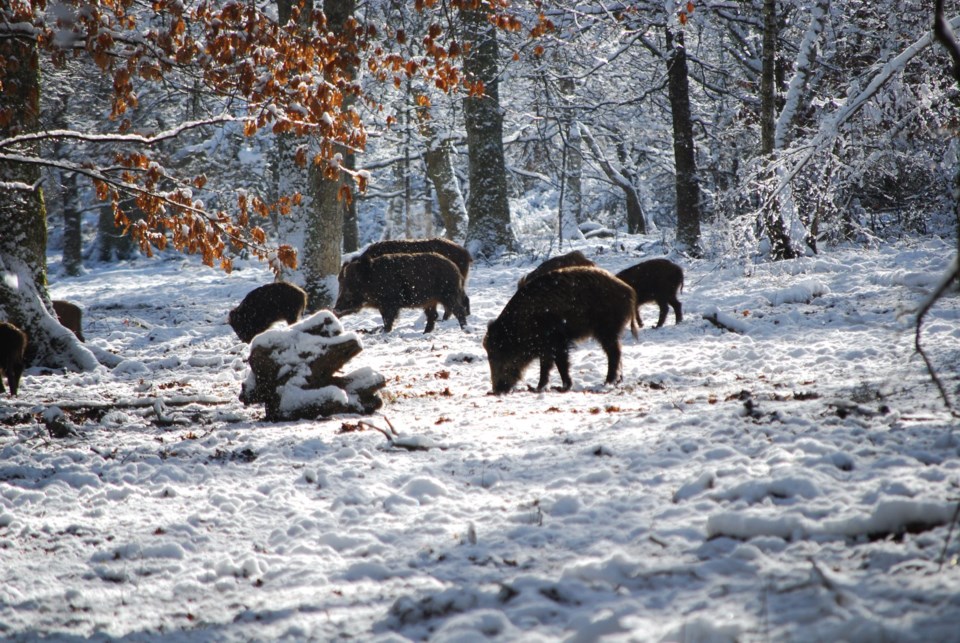 Photo by Arthur Smaal via Pexels

The invasive wild pig problem in Ontario is “definitely on par with Asian carp,” according to one wildlife expert.

Keith Munro is a wildlife biologist with the Ontario Federation of Anglers and Hunters, overseeing the wild pig portfolio. He spends much of his time trying to spread the word about the problem, and also that Ontario still has a fighting chance to stop it.

Since January 2020, the Ministry of Natural Resources and Forestry received 81 reports of wild pig sightings, according to Jolanta Kowalski, a spokesperson for the ministry.

Locations where people report seeing wild pigs over the years range across southern Ontario from Chatham to the Bruce Peninsula in the southwest, Brantford and Dunnville in the southeast, Lefaivre toward Quebec, and as far north as Temagami.

The province defines a wild pig as any pig, whether domestic, Eurasian wild boar or a hybrid, that is outside a fence without an identifiable owner.

Wild pigs have not yet established a self-sustaining population in Ontario, and groups like the Ministry of Natural Resources and Forestry and the Ontario Federation of Anglers and Hunters are asking for all Ontarians to be diligent to ensure they do not.

In Waterloo Region, the ministry received one unverified report of wild pigs, says Kowalski. Other relatively close sightings include west of Princeton, Huron East and Shelburne.

“One thing I can say about the Kitchener-Waterloo area and southern Ontario in general is that it would be great pig habitat,” says Munro. “That sort of mix of intense agriculture with some smallish woodlots and river bank forested stuff, that’s both excellent landscape for pigs to reproduce and thrive in and the sort of landscape that would really feel those significant agricultural damage costs as well.”

The United States Department of Agriculture estimates more than $1.5 billion is lost each year to wild pigs either through damage or lost produce. Pigs love to eat agricultural crops and trample the plants and dig up the ground in the process.

“When it comes to concerns about species, (wild pigs are) definitely on par with Asian carps which is one of the most visible invasive species on North America right now,” says Munro.

Pigs are the fastest reproducing mammal of their size, says Munro. They reach sexual maturity in six months and have litters twice a year, with around 10 piglets per litter. This is a high birth rate compared to the white-tailed deer, a prolific native species, which in healthy conditions has two fawns a year on average.

Wild pigs are potentially an enormous problem for the environment. A wild pig can weigh up to 420 pounds. They root up the earth with their strong necks, tusks and snouts, causing a lot of damage to the landscape, and even water quality.

Pigs are omnivores and will eat almost anything. They not only compete with native species and livestock for foliage and feed, they also attack and eat them.

“These are big aggressive animals that are in large groups. And there’s not much, especially in Ontario, that’s going to tackle that,” says Munro.

To survive the winter, wild pigs are known to build nests that biologists call “pigloos.” To make them, the pigs cut down brush and reeds, pile it up and burrow into it. A group of pigs will stay together in their pigloo to keep warm.

Eurasian wild boar were introduced into Canada in the 1980s and 1990s to diversify farming, according to the University of Saskatchewan. Escaped or released animals make up today’s wild population.

Wild pigs are established in Saskatchewan and throughout the U.S. Removing them is difficult because of their fast reproduction rate and because they adapt quickly to human intervention.

To effectively remove them, an entire group of pigs, called a sounder, needs to be trapped and removed all together. Where wild pigs have become established, a sounder can have 20 or more members.

Trapping an entire sounder involves a period of observation, setting up a trap and then triggering it only once personnel are sure all the sounder’s members are inside. If any are missed, the pigs quickly learn to avoid that area, and regenerate their numbers.

Once a trapped pig escapes, it is highly unlikely to ever be trapped again, says Munro.

So the question is, does Ontario have a chance of stopping wild pigs from establishing?

“We do,” says Munro. “We’re standing on the shoulders of our colleagues in the United States and we can learn from their things. We have the techniques and we have the expertise. We know what works to keep wild pigs from becoming established.”

Last year the province proposed adding wild pigs to the Invasive Species Act, though a decision has not yet been posted. Munro says this step will give the province more resources to tackle the problem.

Hunters are asked not to hunt wild pigs because removal is only effective if an entire group is done together, and any missed pigs quickly learn to evade humans and become more difficult to remove.

The province is asking the public to be diligent about any wild pig sightings and report to wildpigs@ontario.ca or on the ministry’s iNaturalist page.

About the Author: Leah Gerber

Leah Gerber is a Local Journalism Initiative reporter based out of Waterloo Region Record. The LJI is funded by the government of Canada
Read more