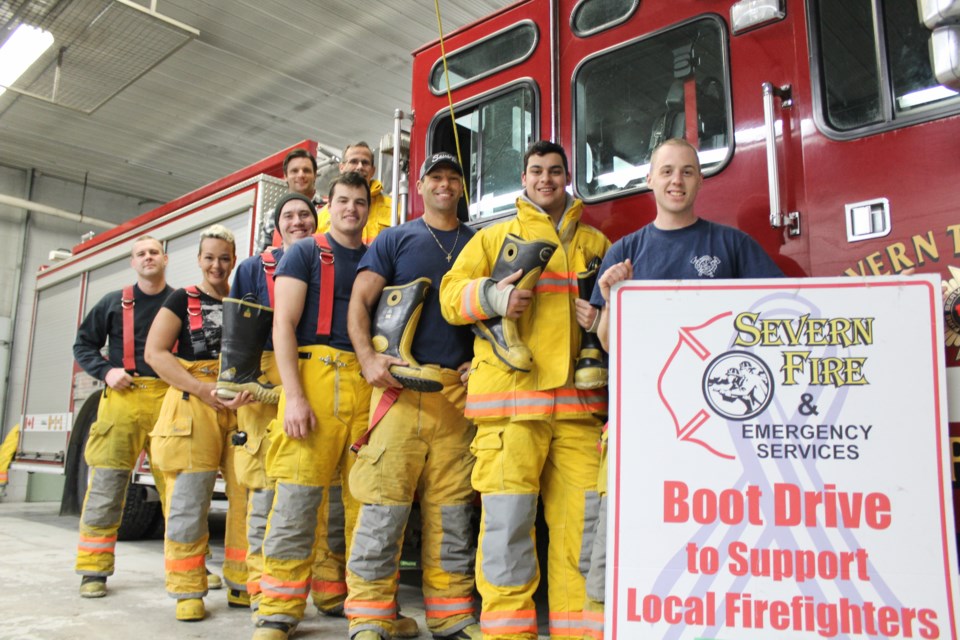 Local firefighters will be putting the boots to homelessness this weekend.

The Severn firefighters’ boot drive Friday and Saturday will raise money for Barrie’s Coldest Night of the Year event in support of Youth Haven, a shelter that serves all of Simcoe County.

“We like being involved in the community,” said volunteer firefighter Cory Harrison. “We’re here on a volunteer basis, so we like to do things like this, too.”

It’s the second year the Severn firefighters are raising money for Coldest Night of the Year.

He’s right, according to Lindsay Campbell.

While Barrie is the only municipality in the county that has a youth shelter, Youth Haven has recently expanded its outreach, opening an office in Orillia last summer.

Since opening in June, the Orillia office has had 67 walk-ins, in addition to all of the calls and referrals.

Efforts to open a youth shelter in Orillia have been ongoing for more than a decade. A place to sleep would be a good start, but the need is greater than that, Campbell said.

“If we had a wish for Orillia, it would be to have a transitional home for youth,” she said, adding, in addition to shelter, it could provide life-skills training and other supports. “In Orillia, we really do need more.”

The firefighters are happy to help with that effort, Harrison said. Last year, the boot drive raised more than $1,000 in a day. This year, it’s happening over two days, so the goal is to smash the previous total. They will also be entering a team in Barrie’s Coldest Night of the Year, happening Feb. 24.

Events like the boot drive and Coldest Night of the Year allow the firefighters to interact with the community under better circumstances, rather than during what is often “the worst day of someone’s life,” Harrison said.

Severn firefighters will be accepting donations in the Orillia Square mall parking lot Friday from 4 to 9 p.m. and Saturday from 9 a.m. to 3 p.m.

For more information about Barrie’s Coldest Night of the Year, visit cnoy.org/barrie.

To learn more about Youth Haven, check out youthhaven.ca.