Given right conditions, blue-green algae blooms persist into the fall and even winter

'Many areas in Ontario experienced record-hot temperatures in 2020 which, combined with high-intensity rainfall and with periods of calm are favourable to bloom formation,' says ministry official
Oct 29, 2020 5:00 PM By: Miriam King 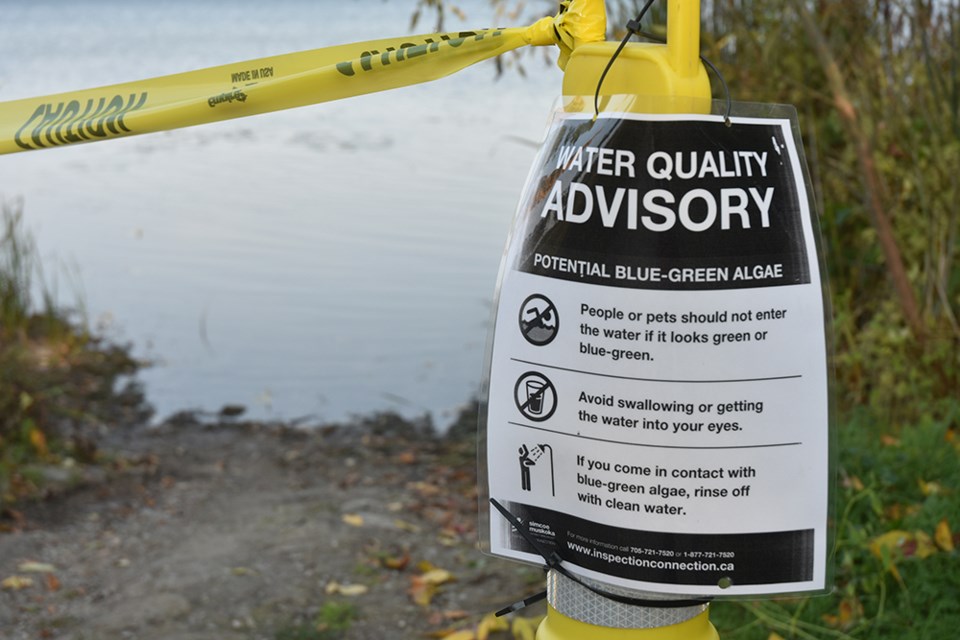 The waters of Cook's Bay in Lake Simcoe, just off Innisfil Line 2, were posted after a bloom of blue-green algae was detected. Miriam King for InnisfilToday

Innisfil residents are used to having their beaches posted with swim advisories by the Simcoe Muskoka District Health Unit during the summer months due to elevated levels of E.coli bacteria in the water.

This autumn saw a different kind of closure. Road ends on the northwest side of Cook’s Bay, in the vicinity of Innisfil’s Line 2, were posted due to the presence of blue-green algae.

Blue-green algae is actually cyanobacteria, which occurs naturally in water bodies in small numbers, but under certain conditions can multiply rapidly and produce extensive “blooms” that form a scum on the surface and colour the water olive green or even bright turquoise.

Cyanobacteria is known to produce toxins that can be harmful when swallowed, contacted or inhaled, causing skin and eye irritation, as well as throat and respiratory tract inflammation. The toxins can also be deadly to pets and livestock when ingested, affecting both the liver and the nervous system.

It’s actually the Ontario Ministry of Environment, Conservation and Parks (MECP) that identifies and tests for cyanobacteria, says Christina Wieder, manager of the environmental health department at the Simcoe Muskoka District Health Unit.

“Ministry of Environment goes out, does a visual assessment, takes the sample to see what algae is present,” then tests for toxins, she said.

If toxins are detected, the health unit is notified and the area is posted.

The health unit advises against swimming or participating in any other water sport in an area with a confirmed blue-green algae bloom. Warnings are also issued against using lake water for the preparation of baby formula, showering or bathing, and against letting pets or livestock drink where blooms have occurred.

Weider notes the toxins are known to accumulate in fish, so anglers are urged to be cautious about eating fish caught in the area.

Removal of toxins is difficult. Boiling water, disinfection with chlorine or ultraviolet, and most water filtration systems do not remove cyanobacteria toxins.

“We advise people with their own surface water systems to seek an alternate water supply for drinking (humans and animals), cooking, baby formula or showering for the duration of the bloom,” said MECP spokesperson Gary Wheeler.

While there are certified water treatment systems, such as activated carbon, that can remove algal toxins from large-scale municipal systems, “there are no certified systems available for individual households that use a surface water supply,” Wheeler said.

The presence of a blue-green algae bloom was identified in Cook’s Bay on Oct. 9 and the area is still posted. It’s not the only location in Simcoe-Muskoka where the blooms have been spotted.

In 2019, only eight postings were issued for blue-green algae. So far this year, there have been 15 alerts in Simcoe-Muskoka.

Several have been ‘resolved’ — with the cyanobacteria dissipating in waves and cooler conditions — but warnings are still in place for a number of lakes in Muskoka Lakes Township, including Bruce Lake, Muskoka Lake (for Boyd’s Bay and Weismiller Bay), Silver Lake, and the east end of Three Mile Lake. Also posted are Stewart Lake in Georgian Bay Township, Ril Lake (Lake of Bays), and, most recently, Otter Lake in Severn Township.

Some of the postings have been in place since July.

“What we find with these blooms is they persist in the water,” said Wieder, adding the blooms can be triggered by warm water, sunlight and high nutrient levels, “so that if the conditions persist, the blooms will grow.”

“Blue-green algae blooms usually occur in late summer or early fall and are dependent on specific environmental conditions, such as calm weather, high levels of nutrients (particularly phosphorus), strong sunlight, warm weather and water temperatures, and relatively shallow water,” according to the ministry.

Wheeler adds: “Many areas in Ontario experienced record-hot temperatures in 2020 which, combined with high-intensity rainfall and with periods of calm are favourable to bloom formation.”

“We definitely had a significantly warmer summer,” said Wieder.

But there is another reason for the increase in reporting: growing public awareness of the danger posed by blue-green algae. More residents are keeping a closer eye on the conditions in their lakes.

This is the first blue-green algae bloom reported on the west side of Cook’s Bay in the past three years, but it might not be the last.

“It’s because of the warmer weather and the nutrients,” said Wieder, underlining how important it is for homeowners, “especially of waterfront properties,” to be cautious in their use of nutrient-rich fertilizers.

So, when can residents expect to see the local issue resolved?

The MECP will watch for visual confirmation that the bloom has dissipated, then after two weeks will retest for the presence of toxins.

“Toxins typically dissipate in the water or degrade within a period of two weeks. On rare occasions, toxins can persist for a longer period of time,” said Wheeler, although blue-green algae blooms can rarely even occur under ice.

The local health unit is now awaiting retesting of the waters of Cook’s Bay by the MECP. Once given the all-clear, the health unit will declare the situation “resolved” – and remove the posting.