Cara Everson is raising the alarm about the potential danger of ethanol-fuelled tabletop fire pots after her friend suffered burns to her upper body so severe she is unrecognizable
Sep 29, 2019 1:30 PM By: Kim Champion 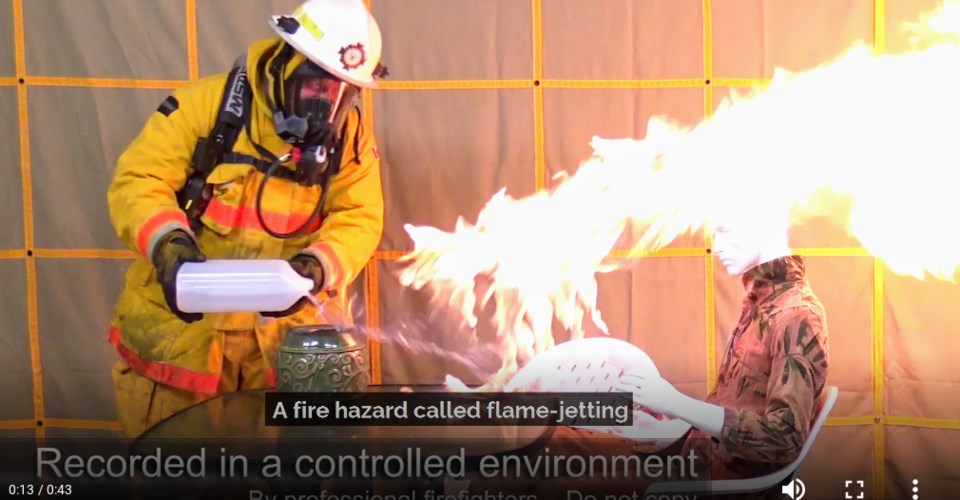 A Newmarket woman is raising the alarm about the potential danger of ethanol-fuelled tabletop fire pots after her friend suffered burns to her upper body so severe that she is unrecognizable.

Cara Everson, a longtime local resident, appealed to NewmarketToday to share friend Cindy Iannucci’s story as a warning to the public about the use of the outdoor atmospheric heating devices, particularly as the nights turn chilly.

Everson said Iannucci, a Scarborough mother of two who recently celebrated her 25th wedding anniversary, was at a late August get-together with a few close friends in Toronto when “everything went terribly, terribly, wrong."

As someone was refilling the decorative fire pot with ethanol, Iannucci was “hit with a fireball that just shot out of it”.

“You really have no hope if you’re sitting in the line of that flame,” Everson said. “It’s invisible at first, and it just takes off, it just shoots out, you’ve got no protection at all. I can’t even imagine the pain. It’s worse than death as far as I’m concerned. It’s heartbreaking, there’s no words to describe how bad this is.”

“It’s such a horrible thing, all of her family and friends are just devastated,” she said.

“Last week, Cindy was still in very bad shape physically. If she does survive this and, hopefully, she will, she will be physically and psychologically injured and her life will be forever changed," Everson added. "For her husband, Mike, and their children, it’s devastating to think that now she will live in agony for the rest of her life.”

The “fireball” Everson describes is a phenomena known as “flame-jetting," according to Ontario fire marshal Jon Pegg who, on Aug. 30, 2019, issued a public safety message about the significant fire safety risks associated ethanol-fueled appliances, such as fire pots and fire pits.

“A fire hazard, called flame-jetting, occurs as fuel vapours are ignited when refuelling these appliances that are not fully extinguished, and a flame is not readily visible,” Pegg said. “Ontario has recorded multiple fatalities and serious injuries related to the refuelling of these ethanol-fuelled appliances this year (2019).”

Since 2016, the Office of the Fire Marshal and Emergency Management (OFMEM) conducted 11 fire investigations that involved the use of these appliances.

Everson believes the ethanol-fuelled products should be banned.

“I’ve been telling people that I know that if you have one of these things, just throw it away,” she said. “To me, the damages of the injuries and the deaths and the devastation that’s occurring from these things far outweighs the pleasure of using one of them.”

“Cindy has a ton of friends, she’s so social and such a good person, we’re all just praying for her and her family and we all feel so helpless,” Everson said. “The least I can do is try to get the word out to other people on how dangerous these things are in the hope someone else won’t get injured or lose their life.”

The OFMEM recommends people protect themselves when using the ethanol-fuelled appliances that are widely available in retail stores locally, and online.

At least one lawsuit has been filed against a manufacturer of an ethanol-fuelled lamp in Ontario. The family of Peterborough dentist, Dr. Judith Buys, who died in August 2016 from severe burn injuries caused by the ethanol device, has launched a $12-million action against lamp-maker Brasa Fire Inc.

If you have questions about other fire safety measures to help protect yourself and your family, visit Central York Fire Services here.

To watch the safety video on ethanol and flame-jetting from Ontario's fire marshal, visit here.

Police looking for woman who allegedly stole items from Cavilinho store
Oct 1, 2020 9:51 AM

People who don't want to follow COVID rules should 'be prepared to pay the price,' police say
Oct 1, 2020 7:30 AM
Comments
We welcome your feedback and encourage you to share your thoughts. We ask that you be respectful of others and their points of view, refrain from personal attacks and stay on topic. To learn about our commenting policies and how we moderate, please read our Community Guidelines.