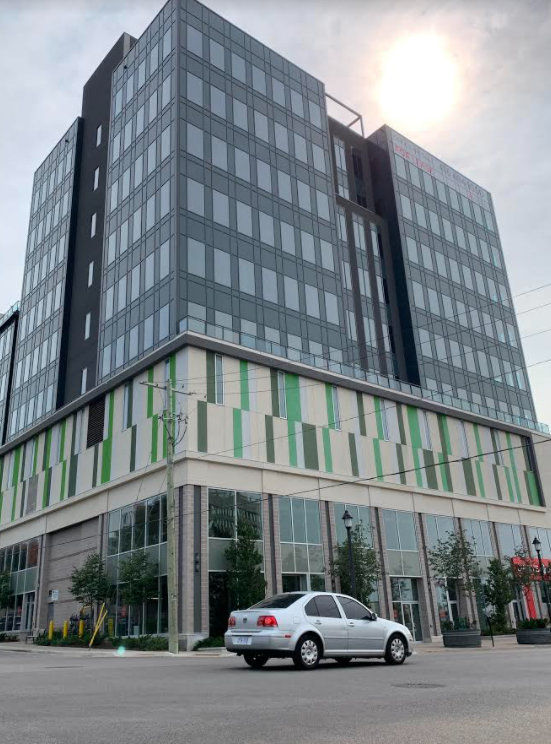 A $250,000 fine against a developer that raised millions of dollars through syndicated mortgages for a series of Canadian developments including Barrie’s once-troubled Collier Centre is little consolation for the many investors who have lost their savings.

“A $250,000 fine is a slap in the face to the rest of us,” said Wasaga Beach resident Bonnie Emms, who lost $100,000 investing in syndicated mortgages for the Barrie development — what was supposed to be her retirement nest egg.

“They should be in jail, these guys," she said. “There’s all sorts of little fallouts from this, but we’re waiting for the big guys to get hit.”

Emms is actively involved in a group of more than 600 investors through a private Facebook group and a website highlighting the details of what they say is the largest mortgage investment fraud case in Canadian history.

While she is hopeful she might be able to recover some of her investment, the 2019 sale of the Barrie building was a signal that the money is lost.

Victims of Syndicated Mortgage Investments say 14,000 Canadians, mostly in Ontario, were duped into investing into about 50 developments nationwide between 2008 and 2018, including Collier Centre.

A condo complex, an office tower and commercial space were developed as part of the Collier Centre at the corner of Collier and Mulcaster streets. After the original developers, Mady Developments, became overextended, eventually going bankrupt, Fortress Real Developments took ownership in 2015.

When Fortress defaulted on its first mortgage, Morrison Financial Realty Corporation took it over and completed construction.

What happened during Fortress’ time in the Barrie project and others across Canada and its involvement in how money was raised and the subsequent failure of many of those projects has been the subject of a great deal of consternation, investigation and finger-pointing.

Emms counts herself among thousands who have lost money. But other than sanctions by the financial regulatory body, the company and its principles have been subject to no other charges or penalties.

The Financial Services Regulatory Authority of Ontario announced last week it has reached a settlement agreement with Fortress related to 12 charges under the Mortgage Brokers, Lenders, and Administrators Act, resulting in the “administrative penalties."

According to the financial regulator, Fortress helped borrowers connect to mortgage brokers and administrators between 2009 and 2018, allowing brokers to raise more than $900 million in syndicated mortgage loans to help fund real estate development costs, even though it was not licensed in Ontario.

The settlement with Fortress resulted from a proposal made two years ago by the former Superintendent of Financial Services suggesting a $300,000 fine for carrying on the business of dealing in mortgages in Ontario without a brokerage licence.

Brendan van Niejenhuis, a lawyer acting for Fortress, said the regulator’s key findings did not assert that Fortress acted as a broker or advisor to individual lenders. In addition, it did not “identify any harm caused to any borrower or lender as a result of the contraventions described in the settlement.

“After years of rumours about what Fortress was alleged to have done, Fortress is pleased that this matter is resolved. These findings speak for themselves with respect to the steps taken and disclosures made by Fortress,” he wrote in an emailed response.

Earlier, four mortgage brokerages associated with Fortress were fined a total of $1.1 million.

The fallout from the whole fiasco also includes the closure of two of the affiliated mortgage brokerages and a third filed for bankruptcy in 2018.

In 2018, the RCMP raided Fortress' Richmond Hill offices during an investigation that is believed to be ongoing, although RCMP refused to comment.

Earlier this month a lawyer was temporarily prohibited from practising law in relation to syndicated mortgage transactions as an investigation continues, the Law Society of Ontario has confirmed.

There have been several individual lawsuits and class-actions proposed in an effort to help recoup some money for the investors, although many have failed.

Public interest lawyer Darryl Levitt is conducting a legal forensic examination of the transaction process in representing about a dozen former investors who had promissory notes that were allegedly converted to lower-ranking syndicated subordinate mortgages.

“We’ve identified parties that we believe had a duty of care to investors,” said Levitt, adding individual lawsuits are in various stages of development. “The promoters of these projects should have actively paid more attention to the products instead of just willy nilly selling.”

The sellers, he added, failed to adhere to the basic selling tenets of knowing the product and knowing the seller.

Five have so far been identified as having exposure to potential liability.

But just where all that money has gone is "the million-dollar question,” said Levitt, whose work includes representing a whistleblower in relation to the Ethiopian Airlines plane crash.

While some of the construction projects did run into severe overruns, much of the money appears to be unaccounted for, he added.

Emms feels strongly that the investors weren’t properly protected and that the government and regulators should have prohibited Fortress from its involvement in syndicated mortgages.

She said Ontario’s financial regulator was aware that the company was involved in syndicated mortgages when it was not licensed to do so and that there had been earlier complications with some of the key players involved.

“There’s so much wrong with this,” said Emms, who has twice picketed in Toronto with other investors to bring attention to some of the organizations that they feel are in part responsible.

The investors thought they were putting their savings in a safe investment which would generate regular, predictable income.

But they said they later learned the land values were grossly inflated and they didn’t know 35 per cent of their investment was deducted from their principal for fees and commissions.

Through the website, the investors say they discovered that $17 million of investment in the Barrie project was wiped off title as a result of the court-ordered sale, although they say they were promised a “gratuitous” non-recourse mortgage.

“It’s just horrendous when you go back 15 years on this,” said Emms, adding the warning signs were there, but ignored by those in the position to pay attention to them.

‘I still feel ashamed’; investors' life savings held in limbo
Jan 11, 2019 1:30 PM
Comments
We welcome your feedback and encourage you to share your thoughts. We ask that you be respectful of others and their points of view, refrain from personal attacks and stay on topic. To learn about our commenting policies and how we moderate, please read our Community Guidelines.