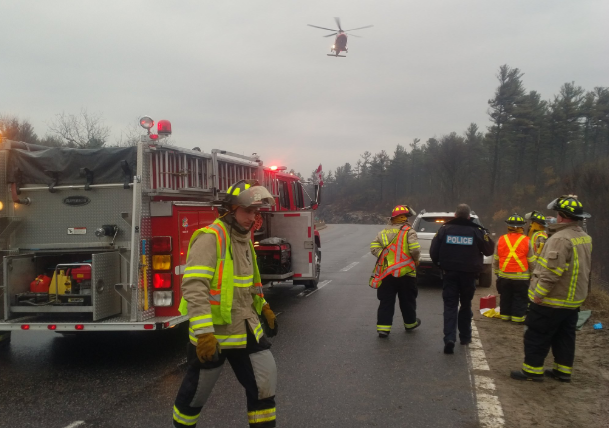 An air ambulance arrives on the scene joining firefighters from the Gravenhurst Fire Department Thursday afternoon. One person was killed and two others were injured in the crash. Gravenhurst Fire photo

One person is dead and two others suffered undetermined injuries in a devastating crash on Highway 11 late this afternoon between Washago and Gravenhurst.

Details are sparse, but OPP confirm one person was killed in the crash in the northbound lanes of the highway at Southwood Road in Severn Bridge.

The entire highway was shut down at around 5 p.m. to allow an Air Orng helicopter to land. It's believed at least one person was taken to a Toronto-area hospital.

Police said it's unknown when the northbound lanes of the highway re-open.

Currently, traffic is being diverted off the highway on to North Kahshe Lake Road.

When the crash happened, it was raining and the roads were slick, but it's not known at this time if weather was a factor.