Family 'heartbroken' after snowmobiling death of father of six 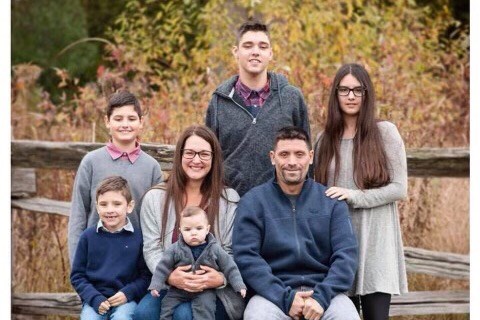 Bill Fournier is shown with his family on a fundraising site.

A fundraising campaign to help the family of a Midland snowmobiler who died last weekend has already surpassed its goal.

Organizer Margaret Cudahy-Stubbins set a goal of $20,000 to help the family of Bill Fournier deal with his loss had reached $22,245 as of this morning.

“We have reached our established goal and are eager to assist her to further secure funding for their future needs, educational endeavours for her children and expenses,” said Cudahy-Stubbins, whose niece Brie is Fournier’s widow.

Fournier, 40, died Sunday after the snowmobile he was driving plunged into open, icy water near Midland Point.

Police were initially called to the area after receiving reports that a lone snowmobiler had just driven into the open water while travelling on the ice and appeared to be struggling to swim to safety.

Southern Georgian Bay OPP officers, Penetanguishene firefighters and County of Simcoe paramedics attended the scene and were able to locate and eventually rescue the snowmobiler, who was able 50 metres from shore in open water filled with ice chunks.

Sadly, despite the efforts of numerous emergency services personnel and treatment staff at Georgian Bay General Hospital, Fournier died from his injuries suffered during the incident.

“Family meant everything to Bill Fournier,” Cudahy-Stubbins wrote in creating the fundraiser. “He was a loving father to his six children and a proud soulmate to his wife Brie Cudahy. Bill’s tragic and unexpected passing has left his family heartbroken and forever missed.

“Brie and the children are now facing the stark realities of life without Bill. Brie must continue his wish to celebrate their children’s milestones and accomplishments without him as she now becomes both mother and father to their children. Bill’s family is grieving for the immediate loss of their father and husband and well as the life that could have been.

Cudahy-Stubbins, who pointed out all proceeds will go to Brie and her kids, said that compounding her niece’s grief is the realization that she now shoulders the full weight of her family’s financial stability.

“She must be solely responsible for the cost of the household, the cost of the funeral and the cost of providing future opportunities for her children,” Cudahy-Stubbins said, noting the fundraising campaign is designed to help lighten the load of that financial weight.

“A donation will not change the reality that Bill is gone, but that’s not what we are trying to do,” she continued. “We’re trying to help in the days to come, with the challenges yet to be faced. We know Brie and their children will be forever grateful.”

A GoFundMe account has also been set up to help a Coldwater family in their time of need.

On Sunday, Jereld Bremner, 49, and his son, Donny Bremner, 19, perished after the snowmobiles they were driving went into an open stretch of Georgian Bay in Sturgeon Bay.

The bodies were recovered on Monday morning by the OPP search-and-rescue dive team.

Community Editor Andrew Philips is a multiple award-winning journalist whose writing has appeared in some of the country’s most respected news outlets. Originally from Midland, Philips returned to the area from Québec City a decade ago.
Read more