Encountering a black bear can be a wild experience

It's important to be prepared for surprise encounters if you go into the woods, says outdoors columnist
0
Jul 22, 2019 7:30 AM By: David Hawke 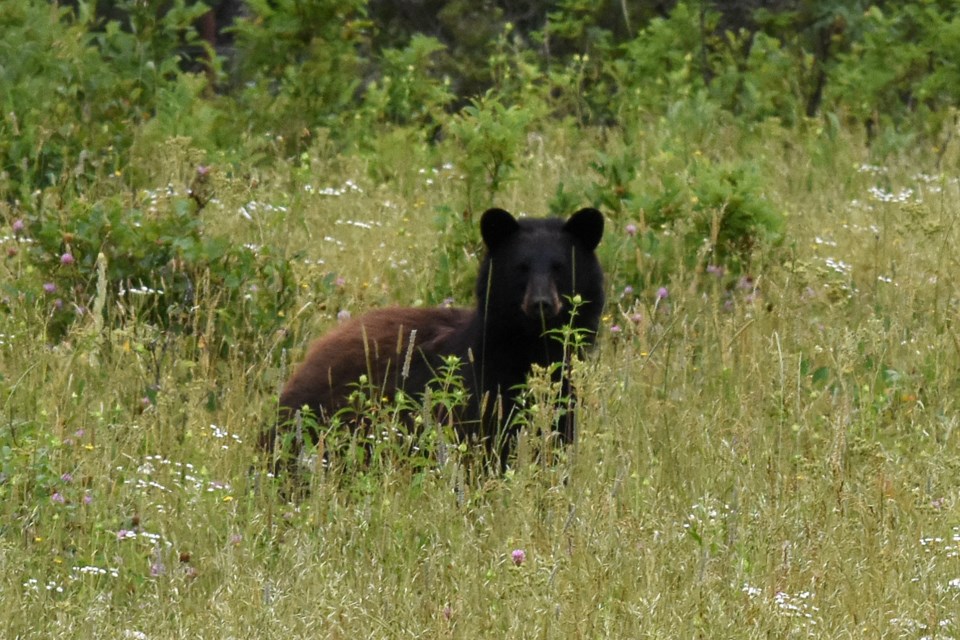 A black bear in his natural habitat. David Hawke/OrilliaMatters

Depending on who you are, where you are and what the situation is, encountering a black bear can elicit any range of personal responses.

Within our group of three we seemed to have both ends of the scale covered with: "Oh wow, a bear, way cool!" to "OMG! A Bear! Should we run away? Is it hungry? Will it attack us?"

In fairness to all concerned, perhaps each of us covered the above emotions, just maybe not out loud. I know I did.

On a wilderness hike, part of the outing is to appreciate the wildlife which may be encountered. Butterflies, birds, dragonflies and wildflowers are expected and most often noted.

Snakes, turtles and frogs are lucky bonuses. However mammals are usually few and far between (unless you count humans... they seem to be everywhere). To actually see a raccoon, skunk, otter, beaver or other warm-blooded critter is actually a rare event, in the wild.

On this day we were exploring a 900-acre ranch, following cow trails through the forested areas and cutting across vast open areas of grassland, trying to determine if invasive plants were present.

In this area there has been an on-going battle with controlling dog-strangling vine, garlic mustard and phragmites reed. We had been granted permission to explore this unique parcel of land and were determined to cover as much of the area as we could in a day.

In a muddy section of the trail we had found tracks of raccoon and skunk, the most common way of knowing these mammals are around, and the unmistakable paw print of a young bear. And freshly made, too.

Despite the collective outdoor experiences of our group, those little hairs on the back of the neck began to tingle. A bear track is one thing, however the track of a wee small bear is another situation entirely, as Mom is probably close by in protective attendance.

On we went, knowing the trail would lead to another open field just up ahead.

At this point I was in the lead and was looking forward to getting away from having to duck and dodge the multitude of dead spruce branches that poked out from the sides (I think cattle must have thicker skin than me, as they seemed to crash through here quite regularly).

Upon gaining the clearing we went up a small rise, scanning the area for those nasty invasives. Movement in the meadow grasses caught my attention, directly ahead, about 60 meters out. Looked like a porcupine was waddling about. Cool. Don't often see them out in the open as they like to spend their days high up a tree, catching the cool breeze and calmly surveying their domain.

But then this porcupine turned sideways. "Um, hey guys, there's a bear on the trail ahead of us." When you are in the lead you get to say exciting stuff like that. And that brings us back to the opening paragraph. Do we stay or do we go?

However, as we were at this point deep into the property and really should keep going forward, the bear, which was flipping rocks and eating ants, was directly in our line of travel.

Other factors racing through my mind were: It's a 2-3 year old, not a little cub with a momma nearby; there are no nearby dumps, campgrounds or greasy barbecues that the bear would associate people with food; it looked quite healthy so not an injured, starving bear.

I took a deep breath and shouted with as much bravado as I could muster, "Hey bear, hey bear! Get outta there! Hey bear". I expected the bear to tumble backwards in surprise and go running pell-mell away. It didn't. It kept flipping rocks.

Another shout and it paused, as if thinking, "Did I hear something?". A third shout and the bear looked up, scanning around for the source of annoyance. It saw us. It froze. We froze.

Through the long lens on the camera, the bear could be seen trying to come to grips with this intrusion. Confusion, recognition, annoyance... it's amazing how clear an animal's emotions can be interpreted through a wiggle of an ear, the tilt of the head.

To convince the animal that we were real and not some figment of his imagination, a vigorous waving of my hat brought it to the conclusion that its solitude had been invaded and that it was time to go.

The bear left in a hurried lope, stopping once to look back to see if we were chasing him or not. The look it gave us was very much the same as I do when a new housing development crops up in the countryside: "Darn, there goes the neighbourhood."

Should you go down in the woods today, be prepared for surprise encounters along the way. Our experience was dealt with in a manner thought appropriate for the situation.

With most wildlife/people encounters all the animal really needs is to determine a clear escape route and the time to take it. What if the bear had refused to go? What if the bear had decided to challenge us? Those scenarios would have had to have been dealt with, but thankfully not today.

Two teens charged after replica handgun pointed at police officers
Jan 23, 2020 2:49 PM
Comments
We welcome your feedback and encourage you to share your thoughts on this story. We ask that you be respectful of others and their points of view, refrain from personal attacks and stay on topic. To learn about our commenting policies and how we moderate, please read our Community Guidelines.