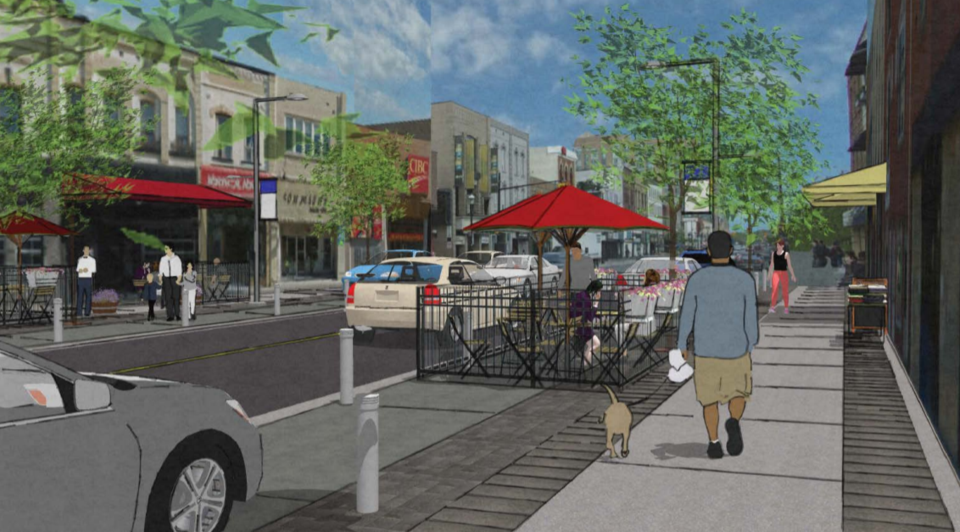 This artist's rendering shows what a completely redesigned Dunlop Street could look like in downtown Barrie.

A massive overhaul of Dunlop Street in downtown Barrie is going to cost significantly more than the city initially bargained for.

At a special city council meeting on Tuesday night, councillors voted to increase the project budget by more than $2.5 million, after construction bids came in higher than expected, based on the design consultant's preliminary estimations.

"It was kind of a timing issue that got us," Mayor Jeff Lehman told BarrieToday, noting there's also much more involved when ripping up a road and replacing underground infrastructure when it's the city's main drag.

"If we were doing a suburban road, it's a little more straightforward. With this one, we've also got all of the downtown businesses to be concerned about," he added.

To deal with all of those "complexities," the tender window was extended, but it didn't close until right before the Canada Day long weekend.

"That's obviously later than we had hoped, but we wanted to get it right rather than right away," Lehman said.

In April, council gave the $10.5-million project the green light, but the price is now expected to be $13.1 million.

Due to the busy construction sector in Ontario, only two bids were received.

Bala Araniyasundaran, the city's director of engineering, outlined some of the reasons behind the higher figures, including market conditions and the "challenging nature of the project." He also noted that the City of Toronto has launched its busiest construction season ever.

Lehman said it's not unusual for tenders to come in higher than expected.

Re-tendering the project and pushing it back a year, in hopes of getting lower bids, was out of the question, the mayor added.

"If we didn't get it tendered now, we're not going to get it started in September," he said, adding it's unlikely that the bids would be less, especially with construction costs increasing by around five per cent each year.

"Council understood that it was higher than the estimate, but that it was better to do it now at the 2019 price," Lehman said. "We're ready to go and there's already been a lot of work done with the BIA."

The Downtown BIA will also contribute $300,000 to the project over six years.

Although expanded sidewalks receive a lot of the fanfare from the public, Lehman said that's actually a relatively small part of the overall project. He stressed that it wasn't optional items, such as street lamps, that came back at a higher cost.

"The vast majority of this is to replace the pipes that are under Dunlop Street which, as you can imagine, are a much bigger job," he said. "That's the piece that came back with a higher cost in the estimate. It was about $2 million more to do all the pipes than the estimate."

While the additional costs will be covered through reserves, city staff will look at possible reductions in other capital projects to make up the $2.5-million shortfall and report back to general committee.

Phase 1A of the Dunlop Street project, between east of Mulcaster Street to just east of Owen Street, is expected to begin Sept. 10 and continue until Nov. 8. The remaining work would be completed in early in 2020, possibly February or March, weather permitting.

Phase 2, which includes the section between Bayfield and Toronto streets, would begin upon the completion of Phase 1B.

In mid-June, council received an update on various capital projects, which is where councillors would normally deal with costs exceeding the anticipated budget.

"We have dozens of projects come back from tender. Some come back under estimate, so the budgets are less than we need, but some come back over tender and we have to approve a higher amount," Lehman said. "We had $17 million of under-estimate (projects) and $12 million of over-estimate, so we were actually $5 million in the good."

However, the high-profile Dunlop Street project was a few weeks behind in the tender process, so overall the city would still have come in under its estimates for all of the capital projects, said Lehman, noting contingencies are also built into the project costs if needed.

"It's a complicated project and it's an older part of the city," he said. "You could get into the ground and there might be things you're not expecting."

Reconstruction of Dunlop Street was identified in 2015 when the city was looking at ways to improve the pedestrian environment through "alternative streetscape configurations."

One of the key recommendations from staff included maintaining two-way vehicular traffic, but with reconfigurable parking areas that can be used for either pedestrian space or parking depending on time of year and demand. This would accommodate the use of patios by downtown bars and restaurants.

"We're also looking ahead to very substantial development proposals coming for the downtown," Lehman said. "We've already seen those over the past couple of months. So this is not just about replacing what's there, but also being prepared for these very large projects that are coming."

First phase of Dunlop Street improvements to begin in September
Apr 3, 2019 12:15 PM
Comments
We welcome your feedback and encourage you to share your thoughts on this story. We ask that you be respectful of others and their points of view, refrain from personal attacks and stay on topic. To learn about our commenting policies and how we moderate, please read our Community Guidelines.