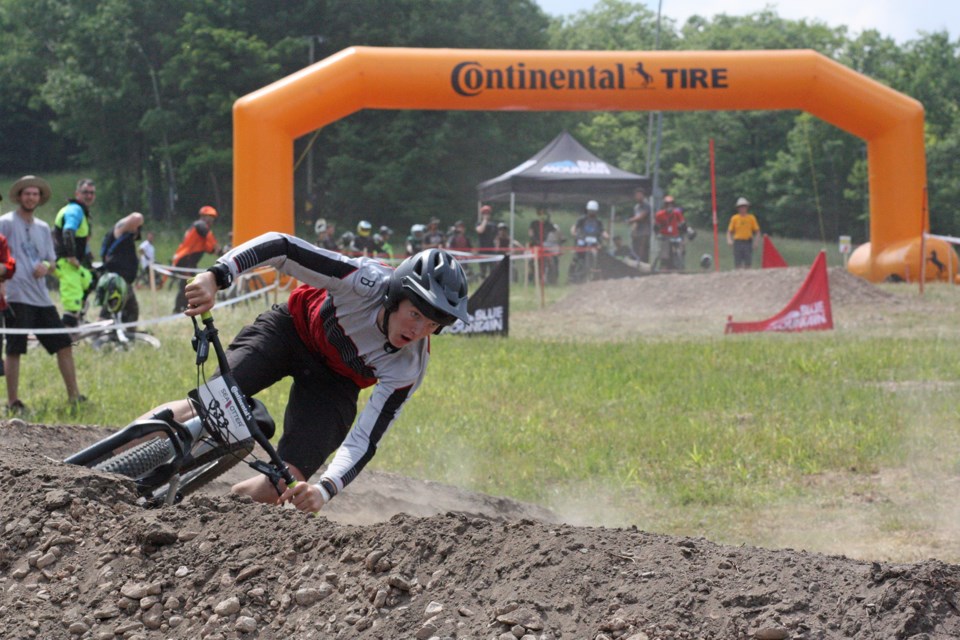 A rider takes a hard left turn on the dual slalom course at Blue Mountain during the Sea Otter Canada races held before the pandemic. Erika Engel/CollingwoodToday

The downhill biking community was reeling Wednesday morning after Blue Mountain Resort announced it would be discontinuing lift access and bike park operations this spring.

“Speaking with the CEO, Dan Skelton last year about the pandemic closure. He did state that it was a good business and Blue Mountain did have a viable interest in maintaining that business. So, what has changed between last year and this year? That's probably something that people in the community would like to know,” said James Frost.

Frost is an avid downhill rider. At 29 years old, he has been riding at Blue Mountain for the past 15 years and races full-time in the summer months throughout Canada and the U.S.

He said he does not understand the resort’s decision to close lift access, but also added that the communication about the closure has left a lot to be desired.

“The community was left in the dark, frustrated and angry. This position led to rumours, assumptions and conversations with no validity, literal speculation,” he said. “At minimum, an understanding for the ever-lingering question free of the corporate auto text – why is lift access biking closed? One or two reasons, not a big ask.”

Blue Mountain Resort closed its bike park operations for the 2020 season citing COVID-19 safety precautions. At the time, Frost was hoping the resort would continue to communicate its future plans with the riding community.

“They could have engaged with the community long ago, at minimum, with updates progress reports, or a simple 'no,' right off the bat. It’s been well over a year now, of people twiddling their thumbs waiting for some type of announcement good or bad,” he said.

Clarksburg resident Richard Maxwell who "raised his son" on the downhill trails at Blue says it’s a sad day for the riding community.

“There is nothing more gratifying than to see my son and his friends fly down the mountain, that’s a given. But more so, is to see the camaraderie of all these athletes at the bottom of a run, with absolutely zero regard for age, gender, or ethnicity,” Maxwell said, adding that he is very disappointed in the resort’s decision to close the lifts.

After being closed for the 2020 season, Blue Mountain Resort announced on Monday evening that it would be permanently closing the bike park operations and discontinuing lift access as of the spring.

“Downhill mountain biking and the passionate riders who have enjoyed the Blue Mountain Bike Park have all played a part in developing summers on the Mountain. For everyone on our Blue Mountain team, making the decision to shift our approach to our on-mountain trails was not an easy one,” stated the resort on its website.

The resort noted that all current pass holders will be automatically refunded and refunds should be received by April 30.

The resort’s repair shop operation are set to continue and at this time the rental fleet will not be sold.

A request for further comment from Blue Mountain has not been returned.

In its notice to the bike community, the resort noted that it would be “unveiling details regarding updates to the on-mountain trail network in the coming months.”

“If this is something that you're involved in, you're upset.  It’s like if you took skiing away, I am sure you would hear about that,” Maxwell said. “We kind of got a little bit of an inkling last year that something like this was going to happen. If nothing else, we’d maybe like a better explanation on their part.”

“Look at the boom of cycling-related activities in the past year in our local jurisdictions. Is mountain biking the fastest-growing sport in Canada? Might be!" Frost said.

“I feel strongly that Blue Mountain missed the ball on this. There's a whole new market of new riders, younger riders and motivated riders that are interested in trying out the various disciplines of mountain biking, including the lift-access version,” said Frost. "To see all that close up on a whim, and, frankly, a business decision is very upsetting,” he concluded.

About the Author: Jennifer Golletz

Jennifer Golletz covers civic matters under the Local Journalism Initative, which is funded by the Government of Canada
Read more