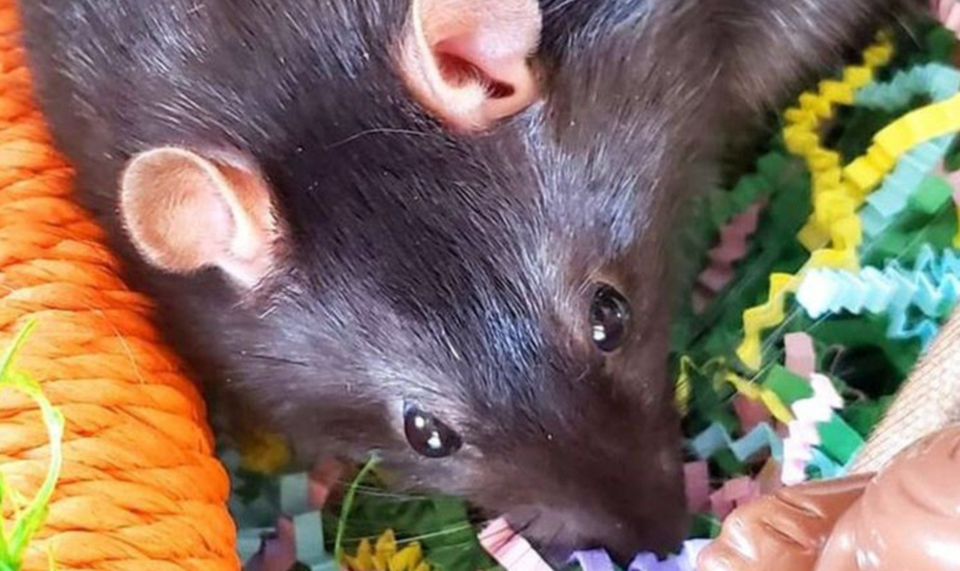 Found, a black Berkshire rat, has been recovered after being discovered in an Angus backyard shortly after Christmas.Photo by Alexandra Fantauzzi

At first they were lost and now they are found.

Two baby rats, named 'Lost' and 'Found', that were discovered roaming around the Lawsons' backyard last winter celebrated Easter with their new family on Sunday.

When Ina Lawson looked out at the bird feeder in her backyard in Angus in January, she initially thought there was a possum scooping up the bird seed, said her husband Ray.

“I looked at it and saw it was a rat — a domestic rat. There were two of them and they weren’t afraid of me. I think they’d been hand-raised,” Ray Lawson said. “That’s the sad part, somebody just let them go.”

The small white rat now named Lost, and the tiny black rat that goes by the name Found, had been living under the shed for a few days by the time he was able to catch them, he said.

“They’d gone in and out of the (live) trap a few times. I kept resetting it with peanut butter for about a week and they’d go in the cage and eat the peanut butter and sneak back out. Then one day I got lucky,” he said.

Lawson caught the black one first and then within an hour had the white rat in the cage.

He listed the pair on an Angus community Facebook page and said he spent the rest of the day answering the phone to some strange inquiries.

“People wanted to take them and use them as fish bait. Another person said he wanted to feed them to his snake,” he said.

Lawson said the COVID-19 pandemic is likely to blame for the pair’s untimely independence.

“I think parents get pets for their kids and then in a couple of weeks the kids are bored with them and something like this happens,” he said.

Enter Angus resident Alexandra Fantauzzi, who said she had hand-raised a half-dozen rats in the past. She said the black rat she named Found is a Berkshire breed and Lost is an Albino-Himalayan.

“When they get excited, they do zoomies like a dog would,” Fantauzzi said. “If you pet them their eyeballs wiggle a bit; that’s called boggling. And they’ll chitter — it’s called bruxing — their teeth in excitement.”

Fantauzzi said she has hand-fed the pair since the day she got them from Lawson and agrees they were probably domestic pets before they were released shortly after Christmas.

“Their loss is my gain. They’re just the cutest little critters,” she said.