Difficulty navigating electronic issues and lack of in-person interaction concerning for some parents; 'While they see their friends over video, the connection is not the same'
Jan 22, 2021 2:30 PM By: Jessica Owen 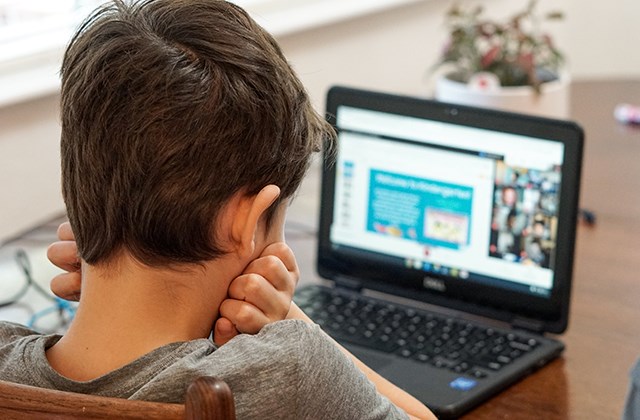 While details are scarce from the province on when elementary and secondary students across Simcoe County will be heading back to classrooms, many parents are feeling the strain, while others say their kids are thriving in the remote learning model.

Erin Trench’s children attend Emma King Elementary School in Barrie. Her son is in Grade 7 and her daughter is in Grade 3. She says the transition to remote learning was smooth as her family had the necessary devices, but the struggle is with motivation and support.

“Both my husband and I work full-time, so we are out of the house all day. My mother lives with us to provide supervision for our kids, although is not able to support in the way the kids need,” she said. “They sometimes find it difficult to navigate any electronic issues or using online programs.

“Also, while they see their friends over video, the connection is not the same,” she added.

Trench feels the mental health of her children is suffering due to activities being taken away.

“The kids go from being online all day to going online all evening to ‘play’ with friends,” she said. “We, as adults, get to move around and do what we do everyday like work or shop, but the kids have had everything taken away.”

She also wasn’t pleased with the way the announcement was made by the province on Wednesday night. The announcement was made in a news release emailed to media, and only outlined which school boards would be returning to class on Jan. 25. All other boards were left out of the release, and no information was provided on their status.

“The government could not even give us the respect to come on and make a formal announcement. The areas were too broad, and (there was) no actual announcement on each school board,” said Trench. “Also, there was no actual date as to when our kids would be going back.”

Brandy Isherwood lives in Innisfil. Her daughters are in Grades 4 and 6 at Goodfellow Public School.

Remote learning has been a struggle in her house.

“They get frustrated. Generally, there’s at least one breakdown a day,” said Isherwood. “I’m annoyed they’re not heading back Monday, even more-so that no return date has been given.”

Isherwood’s family relies on her sole income as an executive assistant for a communications company to make ends meet. She is currently on a leave of absence from her job as she needs to stay home to keep her kids focused.

“This means I’m losing out on my regular earnings and am dipping into my savings account. As the kids are home all day, my grocery bill has increased on top of that,” she said.

“If all the necessary precautions have been taken as we’ve been assured...why aren’t they back in class?” she said.

Amber Carniello is a mom of two who lives in Bradford West Gwillimbury. Her son is in Grade 5 at Fieldcrest Elementary School while her daughter attends Grade 9 at Bradford District High School.

Carniello’s son has been doing remote learning since September.

“For him, it was a rough start (in September),” she said, adding that it took about two and a half weeks for him to get into a learning groove. “I totally felt what (other parents) are feeling right now. Now, he prefers being home. There are less distractions than there were in school. His teacher is phenomenal. Since all the quirks were ironed out, she’s been on the ball.”

Carniello’s daughter, on the other hand, is ready to go back to in-class learning.

“I think it’s the way she learns. There’s the social aspect, but that was completely different this year anyway,” she said.

For her family, Carniello says she’s managed to incorporate her kids’ schedules into her own. Working as a hairdresser she is currently unable to work since the lockdown and is home to help all the time, however for the period in the fall when she was working, there were some days when she would mask up her son and bring him with her to the salon.

“Luckily, my customers were very understanding when he had a question. Sometimes if they knew the answer, they would help too,” she said with a laugh.

Carniello says she was frustrated with the announcement on Wednesday night that students wouldn’t be returning to class on Monday, as she felt the release lacked clarity.

“Simcoe County is such a large area, I feel like it needs to be divided,” she said. “Bradford’s numbers are ridiculously high so obviously having them home at this time is a pain but we need to put the safety of our kids first.”

“People that are north of Orillia where there are (fewer) cases, they should be going back to school,” Carniello added.

A long-term care outbreak at Roberta Place in Barrie has contributed to a higher case count for the region as a whole, with nearly 200 people infected related to the home as of Thursday and case counts rising.

“It’s unfortunate that Barrie’s dealing with what they’re dealing with right now, but I feel that’s (making) the case count for Simcoe artificially high,” she said. “We can’t downplay the severity of what’s happening in Barrie, but it’s making our numbers look worse for all of Simcoe.”

Overall, Carniello thinks everyone needs to cut themselves and others a bit of slack.

“Teachers, parents and kids – we’re all doing the best we can with the circumstances we’re given. We need to be easier on ourselves, the kids and the teachers,” she said.

Marlena Ladouceur co-owns Bayshore Lanes bowling alley in Midland. She has three kids who attend Monsignor Castex Catholic Elementary School: a son in Grade 3, a daughter in Grade 7 and a son in Grade 8.

“I am beyond frustrated as (the bowling alley) is shutdown again for a second time with no date in sight for being allowed to reopen,” she said. “My family has owned Bayshore Lanes since 1984 and it was a successful business until COVID-19 hit.”

She said remote learning does not work for her family and household. Living in Tiny Township, Ladouceur says her family has no options for unlimited internet where her house is located.

“Try having three kids being online all day, plus my own internet use,” she said. “Our school has provided us with one cell phone to ‘hot spot’ off of... but everyone is in separate rooms so they don’t get distracted from one another.”

Ladouceur says her kids struggle to focus on remote learning.

“When they don’t understand something, they are asking me for help and often I don’t know the answer and can’t help them,” she said. “I have a hard time sleeping at night worrying about them and their mental health.”

The Midland mom says she first saw the announcement that her kids wouldn’t be going back on Jan. 25 through the media on Wednesday night.

“I saw it on social media as it was being shared around by news outlets. I tried to confirm by going on Stephen Lecce’s Facebook, FordNation, the (Simcoe Muskoka District Health Unit) and I saw nothing about it to confirm,” she said.

Ladouceur says she thinks the Simcoe-Muskoka area is too large to all be lumped together.

“Our north Simcoe area should be able to open our schools,” she said. “Sadly, we are being punished for the high cases in the cities to the south of us where the majority of cases are in long-term care homes or institutions.”

According to the most recent information provided on Jan. 21 by the Simcoe County District School Board on their social media, all Simcoe County schools will remain closed in response to COVID-19, and all students will continue to participate in remote learning.

All students in Simcoe County with the Simcoe Muskoka Catholic District School Board will be following the same advice.

“We encourage students to continue to connect with their teacher every day and use our regular safe arrival procedures if your child will be absent,” they wrote on their social media on Thursday afternoon. “Our schools are committed to working with families who may be having difficulty accessing remote learning, including access to technology and the internet.”

The Catholic board also addressed scheduled professional activity (PA) days that are slated to take place on Feb. 1 and 2, and said there would be no instruction on those days.