In the week between meetings regarding probe, councillors say they were able to get more information and further consider the matter
Oct 27, 2020 7:00 PM By: Bob Bruton 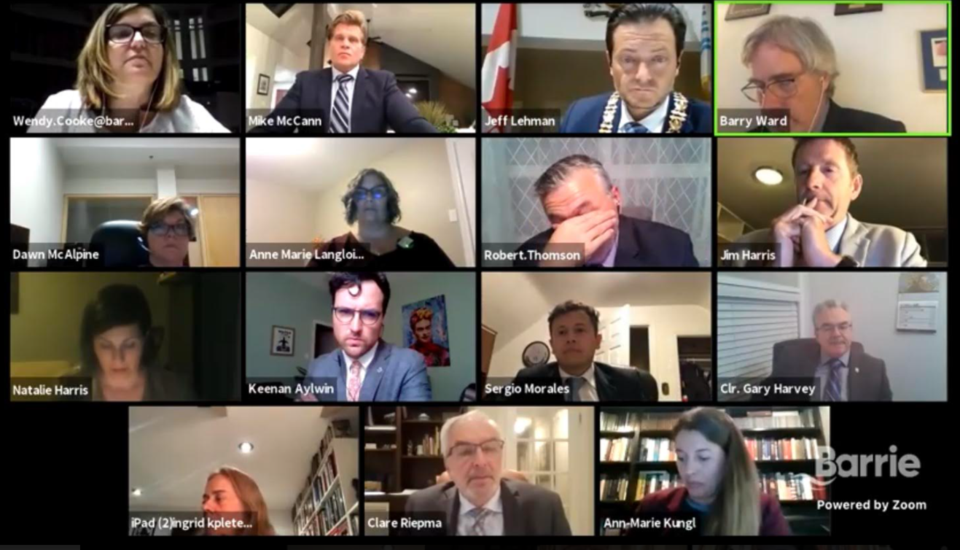 During a virtual meeting Monday, Oct. 26, Barrie city councillors vote on a number of amendments related to a workplace harassment investigation.

Barrie councillors say there was no flip-flop on getting outside legal advice about a confidential workplace harassment investigation involving a city employee.

Instead, they say they were able to pass a more detailed motion retaining legal counsel to provide advice to them on alternative actions and related risks regarding a confidential staff report on the matter.

BarrieToday contacted the five councillors who voted against last week's amendments to find out why they went the other way this week.

“As to the assumption that I changed my mind on getting legal counsel… what I felt was that the first version didn’t have the depth of detail and that the second one did and reflected what was required,” Coun. Jim Harris said.

At the Oct. 19 general committee meeting, an amendment to the workplace harassment investigation motion that it be referred to external legal counsel — to provide an opinion on alternative actions that could be undertaken in response to the results of the investigation set out in the confidential staff report — was defeated.

But at this week's city council meeting on Monday night, an amendment to the workplace harassment investigation motion that external legal counsel be retained to provide advice to general committee on alternative actions and related risks regarding the matter discussed in the confidential staff report, and that this information on alternative actions and related risks only be circulated to members not directly associated with the matter, was approved.

“It’s an important and sensitive item, and you know, I think it really required careful consideration,” Coun. Jim Harris said. “We have that two-step process which allows us to take that time and to have that week, right, to gather our thoughts, gather information and make the best decision.”

Coun. Gary Harvey said he was restricted by what he could say, as the discussions were held in-camera, or private, due to solicitor-client privilege.

“You will notice a significant difference between this week’s passed amendments in comparison to last week's failed amendment,” he said.

“I truly wish we were allowed to be of full disclosure from in-camera items of a public interest and then everyone would understand why votes went the way they did. In the end, council worked as a group to accomplish what’s best for all involved.”

Coun. Robert Thomson said he was working within well-established policy.

“Our governance structure as set out by the city’s procedural bylaw establishes the two-stage system that we have in place for all items coming before general committee and then council on any matter,” he said.

“Members of council may vote one way at committee and change their vote at council in response to additional information or further consideration of the matter. I supported the additional amendments brought forward at council,” Thomson added.

Coun. Natalie Harris was of a nearly identical opinion.

“Our governance structure as set out by the city’s procedural bylaw establishes the two-stage system that we have in place for all items coming before general committee and then council,” she said. “On any matter, members of council may vote one way at committee and change their vote at council in response to additional information or further consideration of the matter.”

Coun. Keenan Aylwin put out a pair of tweets Tuesday morning, one of which read "Wherever you are — keep an eye on your local elected representatives" and another stating "Ahh the sweet smell of accountability."

BarrieToday asked Aylwin about the tweets.

"I believe in accountability and hope that the public will always hold all elected officials to a higher standard," he said. "Integrity, compassion and decency are values I hold and that residents expect from our community leaders.

"I will also encourage public engagement in our democracy and a critical part of that is holding politicians accountable for our decisions," Aylwin added.

Council has also decided to retain an external expert in human resources and municipal law to review staff’s handling of the complaint in the confidential staff report, and report back to councillors on possible changes to policy and procedures on how complaints are dealt with in the future.

The city’s integrity commissioner, Suzanne Craig, will also be be consulted by city staff on the choice of external help and council will approve the choices. (A council meeting has been called for Thursday at 5 p.m., to receive a response from Craig regarding council's request.)

These matters were all approved by a recorded vote of 10-0. Coun. Mike McCann did not declare a conflict of interest, but when asked for his vote by city clerk Wendy Cooke on each of the amendments, he did not respond.

Council also approved a motion that it and staff be encouraged to participate in the national survey on workplace harassment and violence, called Respect in the Workplace, being conducted by the Centre for Research and Education on violence against women and children at Western University.

Council also condemned all forms of harassment and will ensure that all out-of-date workplace policies are updated to align these policies with those of the integrity commissioner.

These motions were all amendments to the main motion approved by council Monday. It is associated with complaints concerning members of council and committees related to workplace violence or harassment.

A confidential staff report concerning personal information, and advice that is subject to solicitor-client privilege matters concerning a workplace harassment investigation, was received by council.

The city’s director of human resources and the city clerk, in consultation with the integrity commissioner and legal counsel, were authorized to amend the violence in the workplace and workplace human rights procedures to remove language identifying roles and responsibilities for city council, and staff, in the investigation process associated with complaint allegations involving council and committee members.

And the city clerk, in consultation with the integrity commissioner and legal counsel, will review the council and committee member Code of Conduct and report back to general committee regarding amendments that may be required to provide clarification of roles and responsibilities of the integrity commissioner associated with complaints concerning members of council and committees related to workplace violence or harassment.

This motion was also approved by a 10-0 recorded vote. McCann was again asked for his vote, but did not respond.

Michael Murphy, CUPE Local 2380 president, has said several workplace harassment allegations were made during the past year and some were substantiated. He declined to give details about who was involved or what happened, although he did say this sort of thing has not happened before, to his knowledge. This union has about 500 full-time members working for the city.

Coun. Jim Harris said the next step for council is to receive the information requested, although there is no timeline.

“Certainly, there was a consensus that people (councillors) want this to be done in a timely manner,” he said of getting the information.