Ward councillor says people have been using parking lot at Kozlov Centre or adjoining streets, 'which the residents are not crazy about'
Jan 21, 2021 12:45 PM By: Bob Bruton 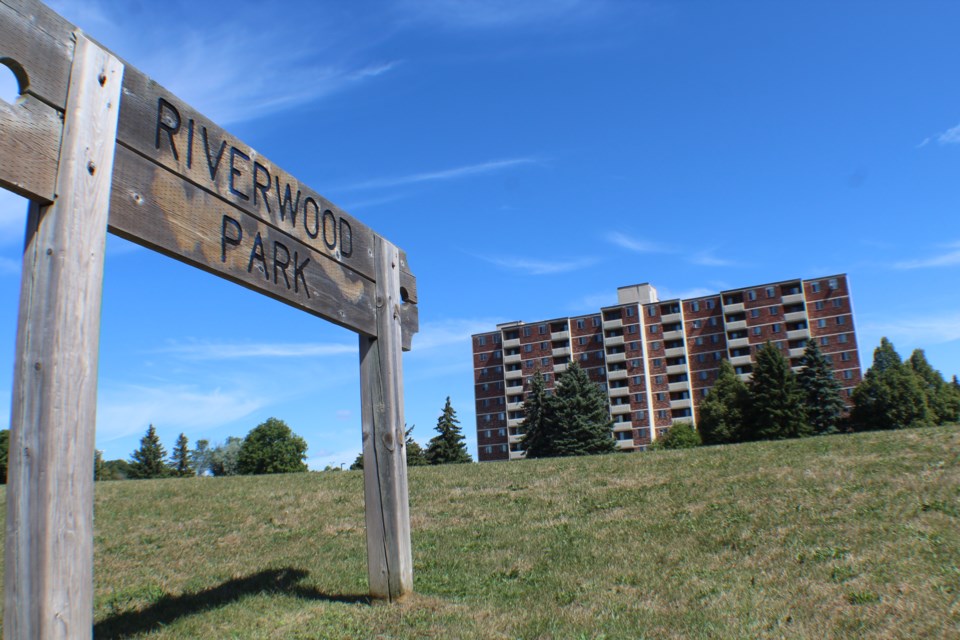 Riverwood Park, with the Sunnidale Place apartments on Kozlov Street in the background, is shown in a file photo. Raymond Bowe/BarrieToday

Barrie’s Riverwood Park could have its own parking lot by 2022’s end if community gardens are built there.

City councillors gave initial approval to adding the parking lot, which could cost about $35,000, to the capital budget Tuesday night. Council will vote on final approval of the lot, and the remainder of the operating/capital budget, at its Jan. 25 meeting.

Deputy Mayor Barry Ward, also the Ward 4 councillor representing this area of the city, noted Riverwood has a playground, busy tennis courts and a soccer field.

“People who drive to it now are asked to park in the Kozlov Centre parking lot… or on the adjoining streets, which the residents are not crazy about,” Ward said. “And next week there’s a town hall meeting to consider moving the Sunnidale community garden to this location and I think we’ve just reached a breaking point.

“We have to admit a parking lot is needed in this park. There’s lots of space for it over on Kozlov Street,…and we’ve got money in the budget for parking lot expansions," he added.

“I don’t think it’s right for the city to keep building infrastructure in parks and not build a parking lot for people to park,” Ward said.

“Wouldn’t people park in the Kozlov Mall? Isn’t there a lot of parking there?” he said. “Maybe we could strike a deal with the Kozlov Centre that would be a fraction of the cost for maybe a year or two, have designated parking areas, 10 to 20 spots would be plenty.

"I’d like to see that park green, not covered in concrete," he added.

“When you go to a community garden, you’ve got a trunk full of stuff,” he said. “Walking that across Kozlov Street, and then across the park…”

McCann also proposed a grassy drop-off area in Riverwood, for unloading, before parking at Kozlov Centre.

“It’s getting ridiculous,” he said. “It’s a small, dirt parking lot, not paved; it takes, tops, maybe 0.5 per cent of the park, maybe less.”

Ward said there’s already a curb cut for vehicles to access the park to an area beside the tennis courts with a driveway in it, where the parking lot could go.

Coun. Sergio Morales said he agreed with the plan to park at Kozlov Centre.

“Coun. McCann is so dead-on on this one. There is parking (at the Kozlov Centre) that is never at full capacity,” he said. “Ideologically, every park and community garden and play structure that we create should have parking… but when this park was designed, it never had community gardens.

“Community gardens are about sustainability, right? Environmental, community engagement, food security? A parking lot would be destroying a significant percentage of the park. Let’s get innovative,” Morales said.

But a majority of councillors agreed with Ward.

“If you are asking people to come to a park for anything, you should provide parking for them.”

When it came to a vote, Ward’s motion passed unanimously.