Code of Conduct saga between Aylwin, Morales ends with apology 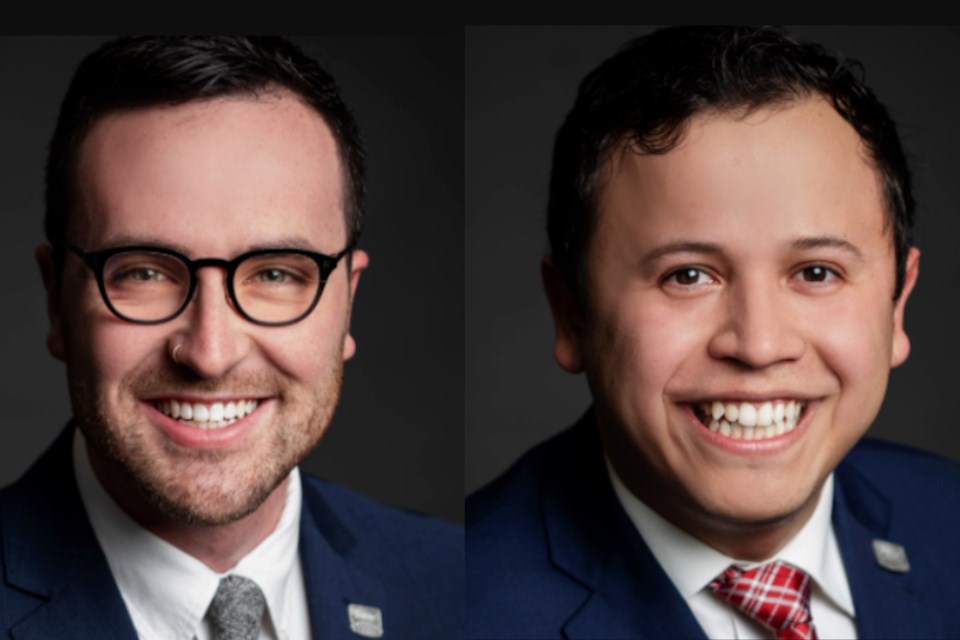 Coun. Sergio Morales has apologized to Coun. Keenan Aylwin for comments he made to the Ward 2 councillor last summer — after being reprimanded by city council, which followed the recommendation of City of Barrie integrity commissioner Suzanne Craig.

“Yes, I’ve received an apology and as far as I’m concerned, the matter is closed,” Aylwin said. “Council has really made an effort to work together more effectively over the past few months.

“I’m thankful for that effort and I’m hopeful we can continue to work together respectfully in the best interests of all residents," he added.

When reached for comment by BarrieToday, Morales said he also hopes to move on from the issue.

“The situation for residents and business owners is getting tougher and more stressful, not easier,” he said. “I’m hopeful we can stick to the municipal issues as we move forward.”

Craig determined Morales’ comments to Aylwin last August contravened Barrie’s Code of Conduct, an agreed-upon understanding by all members of council about what standards they should meet in the individual conduct of their official duties.

“I find that, the respondent’s (Morales’) comments such as, '(I) am living in fear of (Aylwin) attacking me,' '(Aylwin) pouts when he doesn’t get his way,' 'your comments detract away from the great potential (Aylwin) has,' and '(Aylwin) is not a leader,' are comments that (Morales) ought to have known to be offensive,” Craig said in her March 15 report to council.

When council debated this matter March 22, Morales made his case to other councillors.

“Members of council, tonight you are voting whether or not councillors present and future can call out toxic behaviour among colleagues who shame them for their votes, or whether they will live in fear of being reprimanded for doing so,” he said at that time. “I respectfully disagree that the comments about lack of leadership and pouting were in breach of the code.”

Craig also cited Morales for his lack of response to Aylwin’s complaint, which doesn’t comply with the code.

Council voted 10-0 to reprimand Morales and ask for an apology to Aylwin acknowledging and recognizing that calling out the Ward 2 councillor and publicly saying Aylwin is not a leader, along with other disparaging comments, doesn’t comply with the Code of Conduct. Morales also had to recognize that personal attacks against members of council are not permitted by the code. The apology had to be given to Craig within five days of council’s March 22 decision.

A reprimand is a penalty under the Municipal Act, a strongly worded condemnation of a member of council.

Following council’s decision, city clerk Wendy Cooke read a statement that council strongly condemns the statements of Coun. Sergio Morales at the meeting of Aug. 10, 2020, and that following an investigation by Barrie’s integrity commissioner, the member was found to speak against another member of council in a manner that was inappropriate, offensive, insulting or derogatory, that the investigation of the integrity commissioner found the member contravened the council and committee Code of Conduct and that there is a formal reprimand to the council member for having made the comments.

Craig’s report refers to that August 2020 council meeting, and a direct motion that city staff meet with Shak’s World to identify opportunities including leasing the city’s former Youth Centre at 59A Maple Ave., as well as city facilities, to host its proposed programming and its prepared business plan, and report back to councillors Sept. 14, 2020.

Shak’s World focuses on community and the well-being of youth through basketball. The local non-profit group was searching for facility space, and was before council asking for $42,000 to rent it. The organization's president and founder is Shak Edwards, who is a Black woman.

Mayor Jeff Lehman took a vote to waive the rules of procedure so that councillors could hear a presentation by Shak’s World prior to a motion without notice and the direct motion being considered. Because Shak’s World had not completed many of the requirements that grant proponents are required to fulfil, however, the waiver motion was defeated by a majority of councillors.

Aylwin’s comments about systemic racism led to the exchange with Morales.

“That could be a corporation. It could be a schooling system. It could be a municipal government. Sometimes systemic racism isn’t obvious to those on the outside looking in, especially those who are privileged by the system,” said Aylwin, as reported at the time by BarrieToday.

Morales responded: “Mayor Lehman, Coun. Aylwin is implying that council is being racist to Shak. This is ridiculous."

Lehman responded that he didn’t hear a councillor accuse council of being racist, and tried to turn the conversation back to the motion on the floor, BarrieToday reported.

“Very obviously there’s a misunderstanding of what systemic racism is,” Aylwin said.

In her report, Craig determined Aylwin’s comments were not about people, but issues.

“Based on my discussions with individuals, including (Aylwin), it was not the intention of (Aylwin) to suggest that members of council planning committee members were racist,” she said in her report. “His comments were levelled at the inherent systemic inequities of the decision-making process of the committee, and not at the members who make up the committee.”

She did find that Morales’ comments were directed at Aylwin.

“(Aylwin) was incorrect in defining the committee’s August decision to defer approval of the grant to the proponent (Shak’s World) as based on inappropriate motives,” Craig also said in her report. “However, (Aylwin’s) comments do not justify or exonerate (Morales) from his ethical responsibilities to refrain from insulting and offending a council colleague.”

Morales reprimanded, must apologize to Aylwin for comments made last year
Mar 22, 2021 10:26 PM