For the first time in Canadian history, sacred soil recovered from a World War 1 battlefield in France will be repatriated in a ceremony in Barrie next month

For the first time in Canadian history, sacred soil recovered from a World War 1 battlefield in France will be repatriated in a ceremony to be held in Barrie next month.​

Soil was collected at Vimy Ridge by a delegation that travelled from Barrie last June. Currently stored at CFB Trenton, the urn will travel along the Highway of Heroes on June 3, to arrive at the Barrie Armoury, located on Parkside Drive.

Following the Freedom of the City Parade, the urn will depart the Barrie Armoury and arrive at the Peacekeeper Park in Angus on morning of June 7. 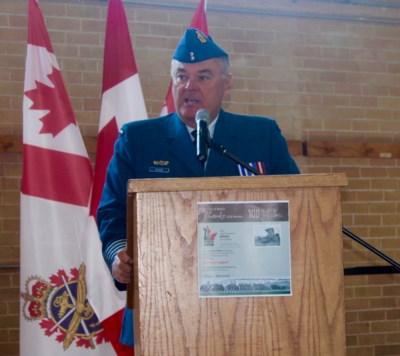 "The soil is symbolic of the 3,598 Canadians who died at Vimy that day," said Honorary Colonel Jamie Massie, . "More than 7,200, including  my grandfather who lost his leg in that battle on Easter Sunday, 1917.

"It truly was a day that Canada went from being a colony of Great Britain to being a nation of the world."

A two-day vigil will occur with Base Borden military and cadets, safeguarding the urn, which symbolizes the sacrifice of Canada’s peacekeepers over the last century, that including military and law enforcement.​

The journey home will be complete when the sacred soil is placed in a new Borden Legacy monument on June 9 at 11 a.m

Soil will then be transported from Peacekeeper Park to the site via First World War wagon and horses and integrated into the wall during the ceremony.

Details of Borden's century of service to Canada celebrations were revealed at a press conference at the Barrie Armoury Monday morning.

The public is encouraged to celebrate "100 years of Freedom" at the following events:

Dreading a mortgage payment increase when you renew? There are ways to find a better rate

Yes, you can give cannabis as a Christmas gift this year!

Footcare Solutions: Orthotics for every walk of life