Brothers brought back into the Barrie Bombers fold 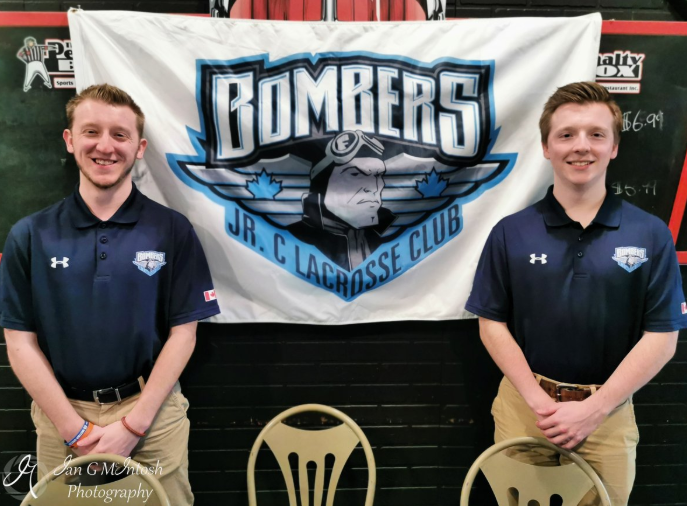 NEWS RELEASE
BARRIE BOMBERS LACROSSE TEAM
********************
The Barrie Bombers Jr. C Lacrosse Club are pleased to announce the signings of 11 returning veteran players. Additional signings of returning players as well as rookies and new players, will be announced next week.

Members of the media and a group of team supporters gathered at The Penalty Box, the official sports bar of the #BombSquad, on Tuesday for the signing event.

Goaltender Wyatt King, the Ontario Junior C Lacrosse league Eastern Division’s Most Valuable Player in 2018, returns to the Bombers for his third season. King, a graduate of Barrie Minor Lacrosse, had a stellar year for the Bombers and his crease heroics were key to pushing the squad to a third place finish despite a rash of late-season injuries to core players.

It will be another season of #Steele2Steele in Barrie, as the Bombers have re-signed Chilly Gear's favourite duo, Bo and Ty Steele.

Two of the most exciting players in Junior 'C' Lacrosse, the Steele brothers known as much for their class as their impressive lacrosse skills. Older brother Bo, heading into his final year of junior, was the team’s top scorer in 2017, winning the OJCLL East’s Most Sportsmanlike Player award. He finished second in team scoring last year behind younger brother Ty, who was named the 2018 Most Sportsmanlike Player in the East.

Hunter Dupee and David Rea, who have been with the team since its 2015 arrival in Barrie, will play out their final seasons of junior in blue and white. Josh McCreith, who has been with the team since 2016, is also headed into his final season in junior lacrosse. The three longtime Bombers are looking forward to playoff success before closing the curtain on their junior careers.

Gritty defender Carson Dunec returns for his fourth season with the Bombers. Dunec, who was an alternate captain in 2018, has appeared in 39 consecutive games for the #BombSquad, a streak dating back to June 2016.

The Bombers also signed defenders Dalton King, who had a stand-out rookie season in 2018 with 13 points on transition, William Lowe, Ryan Michalchuk, and Luke West. All four are expected to take larger roles this season with the graduation of key defenders Mack Deglau and Josh MacIssac.

Join the #BombSquad for our season opener on Saturday, May 11.