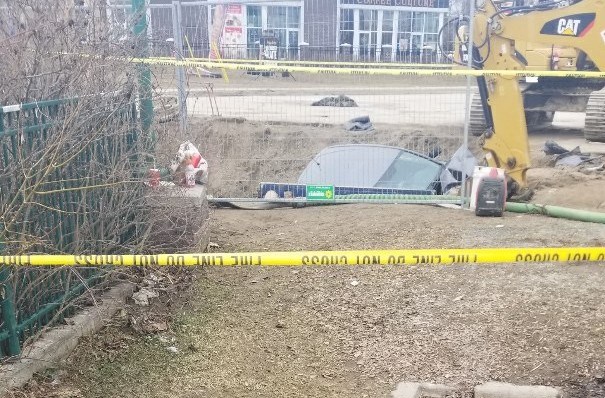 An SUV remains in the pit at the site of the watermain break at the corner of Big Bay Point and Yonge Street. The condition of the two people from the vehicle are unknown. Shawn Gibson/BarrieToday

One of the patients was subsequently airlifted to a Toronto hospital.

Barrie Police continue to be on the scene of the "serious motor-vehicle collision" which occurred at the corner of Big Bay Point Road and Yonge Street - the scene of Friday's watermain break.

Witnesses said a vehicle, driving quickly, ended up in the hole where city workers had earlier been trying to repair the watermain break.

Witnesses said CPR was performed on one of the two victims from the vehicle, described as an SUV.

Van Rooyen could not confirm reports that one of the victims had died.

So far, police have released no further details, saying "the investigation is in the early stages."

We will update the story as soon as more details are available.