It's been an uphill battle for local mother Sandra Szentesy and her two daughters as they try to remain positive despite ongoing health issues
Aug 14, 2020 7:30 AM By: Natasha Philpott 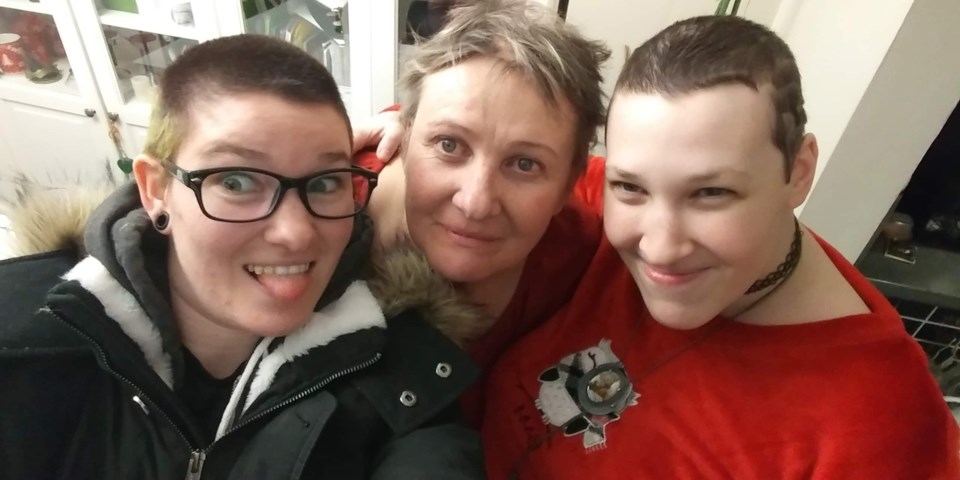 Like most mothers, there's nothing Bradford resident Sandra Szentesy wouldn't do for her children, Leah, 30, and Kaitlyn (Katie), 29, including donating her own stem cells to help keep them alive.

And that's exactly what she had to do last month, as Katie fights for her life after being diagnosed with cancer for a second time this past February.

Her first bout of cancer began in 2018, when in the summer she began developing symptoms associated with breast cancer. Six months later, after multiple appointments and examinations, she was diagnosed with Angiosarcoma, a rare form of cancer that develops in the inner lining of blood vessels.

“It presented itself behind her right breast,” explained Sandra. And in order to get clear margins, Katie would need a radical mastectomy, which she had done in February 2019.

The radical mastectomy involved removing part of her back to cover the hole from the mastectomy. Katie had decided to remove both her breasts since she carries the PALB2 gene which puts her at a higher risk for developing breast, ovarian and pancreatic cancer.

It took three months for her body to heal from the surgery.

“But she was always so positive,” Sandra confirmed.

Katie had been following up with her doctors every four months, and getting clear CT scans. The plan was to have Katie’s breasts reconstructed in 2020, as you need to be clear of Angiosarcoma for one year before being considered for the surgery.

Ironically, on her one-year anniversary of being cleared of Angiosarcoma, she was diagnosed with Acute Lymphatic Leukemia Philadelphia Negative. This is when the body produces an uncontrolled abnormal amount of white blood cells.

Following the diagnosis, she was tranferred to Princess Margaret Hospital in Toronto for intense chemotherapy.

Due to COVID-19, she had to endure the chemotherapy treatments alone. Following the treatments, she developed acute liver failure and pancreatitis, before going into a full remission.

Things were not looking good for Katie, so it was Sandra who stepped up to donate stem cells in order to give her daughter a fighting chance to live.

Katie checked into the hospital on July 18 to begin the wiping out of her immune system with chemotherapy and radiation in preparation for the transplant on July 24. Katie is currently recovering from the stem cell transplant at Princess Margaret Hospital after receiving stem cells from Sandra. It wasn't an easy procedure for either of them.

In order to be her daughter’s donor, Sandra had to receive injections over a four-day period in order for her body to produce extra stem cells for harvesting.

“It was a painful experience” shared Sandra. “It turns out, of course, that I would be the 10 percent that  would have full-body blow-out pain in the muscles and in my bones.”

Doctors were not able to put Sandra on opioids to help with the pain, as it would affect the harvest of the cells, so she was put on painkillers and had to self-administer injections into her stomach every night.

“But it worked!” she rejoiced, with more than enough stem cells to harvest. “It was worth the journey.”

Now, Katie is undergoing chemotherapy again to prevent the rejection of her mother’s stem cells and will remain in the hospital for six to nine weeks. She will then need to rent an apartment close by the hospital so she can receive follow-up care for two to three months.

Last week, Katie was hooked up to a heart monitor for tachycardia (a racing heart rate), her tongue was swollen and could not speak or eat. Her hands and feet were also swollen and in extreme pain.

No one could communicate with her for a few days, but on Saturday there was some glimmer of hope, her blood counts began to rise as the stem cells began to engraph.

So far, things are looking up for Katie, but Sandra acknowledged her daughter still has a long journey ahead of her.

“It’s still a struggle, she’s still bed ridden,” she said, noting it will be two years of maintenance chemo and getting her off immunosuppressants. “And hopefully it will give her some quality of life.”

Katie’s boyfriend, Dean, has also been supportive throughout Katie’s cancer journey and has stood by her side the entire time.

To add to the family’s already stressful experiences, Sandra’s oldest daughter, Leah, also carries the same gene as Katie. She is monitored and checked annually through mammograms and ultrasounds for any abnormal findings.

Leah is also autistic and has been diagnosed with acute dystonia, which flares up from time to time that results in her being wheelchair bound for weeks.

“The muscles are so incredibly fatigued, she can’t stand on them, they have to rest up and get strong again,” explained Sandra.

The thought of Leah having to go through cancer treatments or a mastectomy one day is something Sandra can't fathom.

"We’re going to take it one day at a time, she just turned 30, the thought of her losing her breasts at this point...we’re not going to go there,” she said.

Despite the family’s health challenges, Sandra remains positive for her two daughters.

She is a self-employed personal support worker (PSW) who has had to battle her own mental and physical health issues.

In 2017, she underwent radiation treatment for a benign brain tumour. She also lost both her mother and sister to brain cancer in 2019 and 2003 (respectively).

When asked how she manages the stress of her family’s health issues, while continuing to work as a PSW, she admits it’s not easy.

“Sometimes I just have to crash and burn mentally, emotionally and have a cry day. And just know I have two daughters who need me," she said. “I have a lot of people who rely on me, and I can’t afford to fall down completely, I have to keep going.”

Sandra’s best friend, Kathryn Damas, has started a Facebook Group ‘Katie’s Butterfly Project’ with a fundraising goal of $15,000 to help support the family. Katie hasn't been able to work since 2018 due to her health, and trips associated with treatment in Toronto can add up.

“I knew this woman (Sandra) was special when I first met her in 1983,” said Damas about her best friend.

The pair met in Toronto while working at a restaurant together.

"And she was a breath of fresh air right from then," said Damas. “It’s no surprise she recognized her true calling to become a PSW, and continue to ‘give’ to her clients at a time when she is watching her baby fight for her life.”

Damas admires her best friend's resiliance and all she has taken on over the years.

"How hasn't this woman surrendered?" she questioned. "I don't know how much more this woman can take."

She credits Sandra for her daughters’ strength.

“For those of you that have the good fortune to know any one of these three warrior women, know that they all possess an uncanny ability to be optimistic and funny,” said Damas.

She remembers Sandra's 60th birthday party held at the Bradford Legion, where almost 100 guests showed up to celebrate, which she says is a true testament to how many lives she's touched.

"She somehow has the capacity to keep in touch with so many people," she said.

“Sandra lights up the room when she walks in; she knows just what to say to make you feel better,” she said. “I am baffled daily at how my best friend is still coping and goes to work to take care of others, in spite of the fact that her daughter is fighting the battle of her life!”

“I have never seen a more caring and more giving woman, single mother at that, give wholeheartedly to those around her,” said another good friend, Ellen McKellar Walker.

“I feel blessed,” said a teary Sandra about all the support she has received from friends. “When I read what Kathryn wrote (on the Facebook group), I cried.”

“I feel very supported, friends and people that have reached out to us....just knowing people are thinking about you keeps you strong,” said Sandra. “Just knowing that you’re in their thoughts in the day, it’s incredibly fortifying.”

To make a donation to the family, click here or send an email to kaitlynswaroncancer@gmail.com. To keep up to date with Katie's cancer journey, visit the Katie's Butterfly Project Facebook page here.

Police looking for woman who allegedly stole items from Cavilinho store
Oct 1, 2020 9:51 AM

Johnson’s Beach being expanded; construction to start next week
Oct 1, 2020 9:15 AM
Comments
We welcome your feedback and encourage you to share your thoughts. We ask that you be respectful of others and their points of view, refrain from personal attacks and stay on topic. To learn about our commenting policies and how we moderate, please read our Community Guidelines.