Family’s request for a wheelchair left in limbo after Assisted Devices Program is deemed a non-essential service in light of COVID-19
0
Apr 4, 2020 1:30 PM By: Jessica Owen 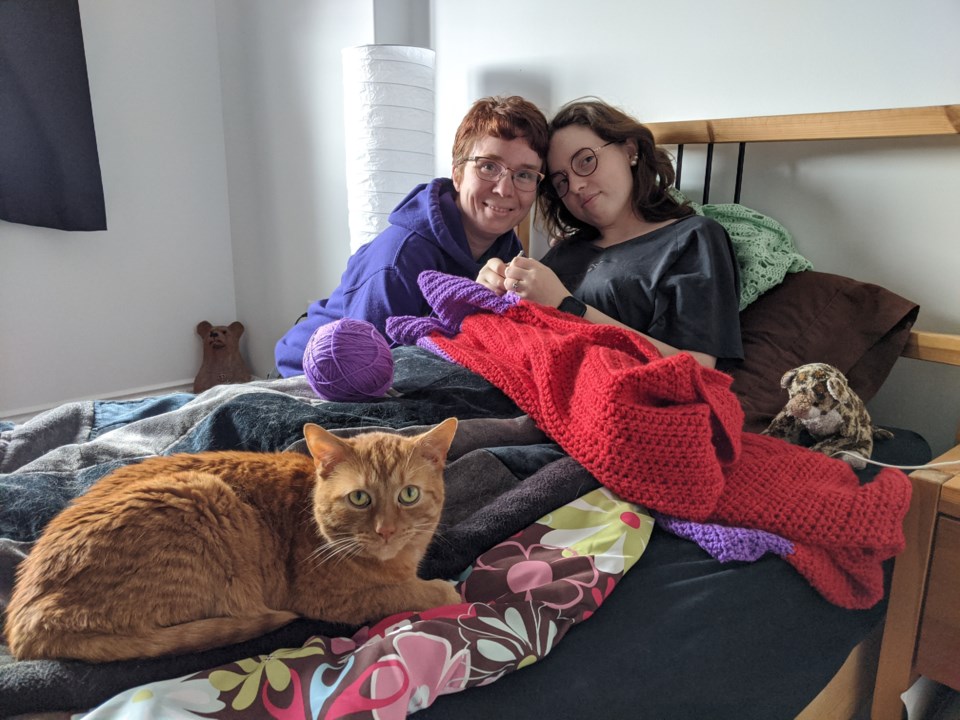 Heather Morgan, left, and her daughter Ten in their home in Barrie. Contributed image

Ten Morgan has been bedridden for more than a year waiting on a power wheelchair.

The Morgan family’s request for the device has been left in limbo after the Ontario government deemed the provincial department overseeing assisted devices a non-essential service in light of COVID-19.

“She is currently in Grade 10, going into Grade 11 in the fall. My very big concern is she’s not going to have this wheelchair even by September at this rate,” Heather Morgan said of her 16-year-old daughter. “By then, she will have effectively been out of school for a year and a half. How is she going to be able to catch up to get the skills she needs to carry on with her life?”

Heather, a local disability advocate in Barrie, has an undiagnosed muscular condition. Her daughter, Ten, has the same condition, as well as autism.

“Even activities as simple as talking, we can do for very short periods of time. Everything is affected, both big and little muscles,” Heather told BarrieToday.

Currently, Ten is unable to hold her body upright due to her condition.

“She spends the majority of her day and night in bed laying flat, unable to really participate in life,” said Heather.

Heather said she was able to find a second-hand wheelchair for Ten to use in the meantime, but it is sized for a seven-year-old and isn’t appropriate for her to use as a long-term solution.

“Even for her to just sit up in the living room with her family; that isn’t an option for her right now because she doesn’t have a chair that fits her,” said Heather.

Heather says she has been working for about a year to get funding from the provincial government through the Assistive Devices Program (ADP) for a power wheelchair for her daughter.

Last week, she was told by Ten’s physiotherapist that the ADP was deemed a non-essential service by the Ford government and therefore, their request would be put on pause.

“We’ve been asked not to send any applications or letters,” said Heather.

The ADP covers 75 per cent of the cost of items such as mobility aids, hearing aids, diabetic equipment, respiratory equipment, custom orthotics and enteral-feeding pumps.

“ADP has had enormous wait times for years. It’s a well-known issue among families with disabilities,” said Heather. “Having ADP closed indefinitely is just going to add to those wait times.”

Heather said she finds the decision to close the department perplexing as she feels it is one that could be run entirely remotely.

“These workers, no one ever sees them. They work on electronic documents to an online system. I just don’t understand how they cannot work from home safely,” said Heather. “This decision needs to be reversed as soon as possible.”

Heather suspects her family isn’t the only one facing this issue, and could exacerbate an already-strained public health system.

“The fact they would deem ADP non-essential, it seems cruel but it also seems very unwise,” she said. “It’s concerning all the way around. In a province like Ontario, I just think it’s unacceptable. I’m concerned about the vast social health consequences with making this decision.”

She’s also worried about the long-term repercussions on her daughter due to the delay.

“She’s going to have more muscle breakdown because of this. I don’t even know what kind of damage it’s going to do to her spine and joints having to use a wheelchair she doesn’t fit into when she does have to go out,” said Heather.

BarrieToday reached out to Barrie-Innisfil MPP Andrea Khanjin and the Ministry of Health and Long Term Care for this story, but did not receive a response by publication time.

Good morning, Barrie!
Jun 5, 2020 6:00 AM
Comments
We welcome your feedback and encourage you to share your thoughts. We ask that you be respectful of others and their points of view, refrain from personal attacks and stay on topic. To learn about our commenting policies and how we moderate, please read our Community Guidelines.