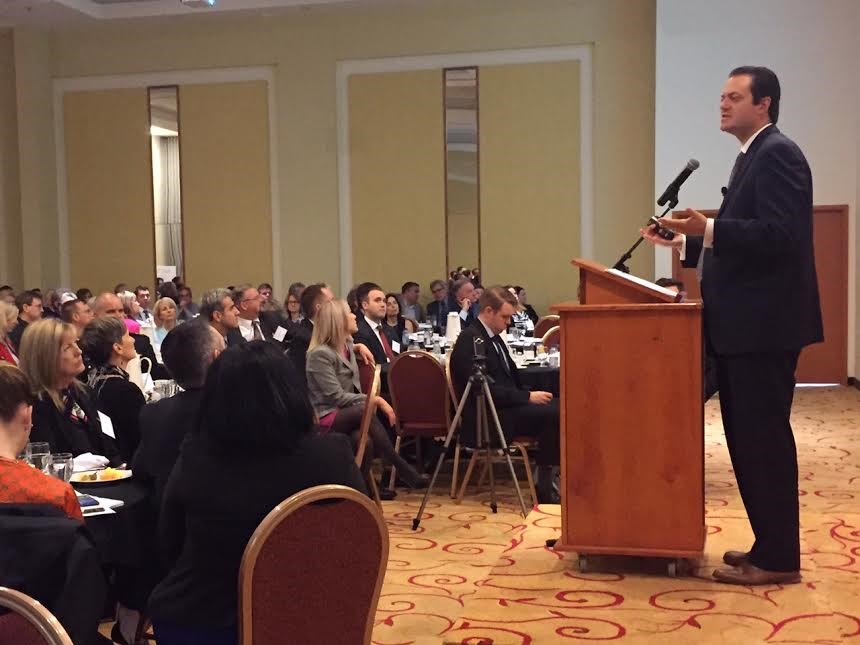 Mayor Lehman speaks to nearly 300 attendees at his Progress Report Breakfast 2017 on May 2, 2017. Sue Sgambati/BarrieToday

Mayor Jeff Lehman delivered his 'state of the city' address Tuesday to a large audience at his Progress Report Breakfast at the Liberty Grand.

The theme of his speech was 'Tomorrow is Here Today' and as per his tradition, Lehman dropped a nugget of news.

When talking about Barrie's sharing economy, the Mayor said he had a meeting yesterday with the CEO of Rover, a parking sharing app.

"Rover is AirBnB for your driveway or for your parking spot at the office. They're Toronto based. Yesterday the CEO of Rover was here in Barrie. I drove him around a bit and we had a meeting at city hall with our parking folks," Lehman said.

The Mayor explained that the city can make money off parking spaces that sit empty most of the time by listing them on Rover.

Someone can park in the commercial spot or even residential driveways.

"You don't need to build parking garages anymore.  That's a huge savings to the taxpayer," Lehman said. "That's a way if we can make a technological solution like this work and embrace the sharing economy, we're all going to benefit in terms of the dollars."

There are people in Barrie who have already listed their driveways or their commercial parking spaces on Rover, he said.

"We had them up yesterday because we want to talk to them about partnering on pilot project.  Look at a certain area of the city and see if we can help increase the supply of parking without building more parking lots and embracing the technology."

It's impossible to talk about Barrie's economy without taking about the real estate market, he said.

'We have seen a 93 percent increase in the price of the average home in five years.  And in two years a 65 percent increase. One of the single best investments in the entire country right now is a home in the City of Barrie," said Lehman.

It creates problems for affordability but the 'crisis' situation is being addressed with a target of 840 new units to be built in ten years - 121 were created last year.

At least 12 new high rise buildings are proposed in the downtown core and all are in 'early stages' with the exception of the Five Points Condo.

Last year the city of Barrie had its single best year ever for the value of new, industrial building permits, according to the Mayor.

"That dollar value was higher last year than in any year in the history of the City of Barrie for new and additions to industrial space."

The Mayor highlighted several businesses that have opened shop in Barrie including Suzuki Canada which has has moved its Canadian head office to the city.