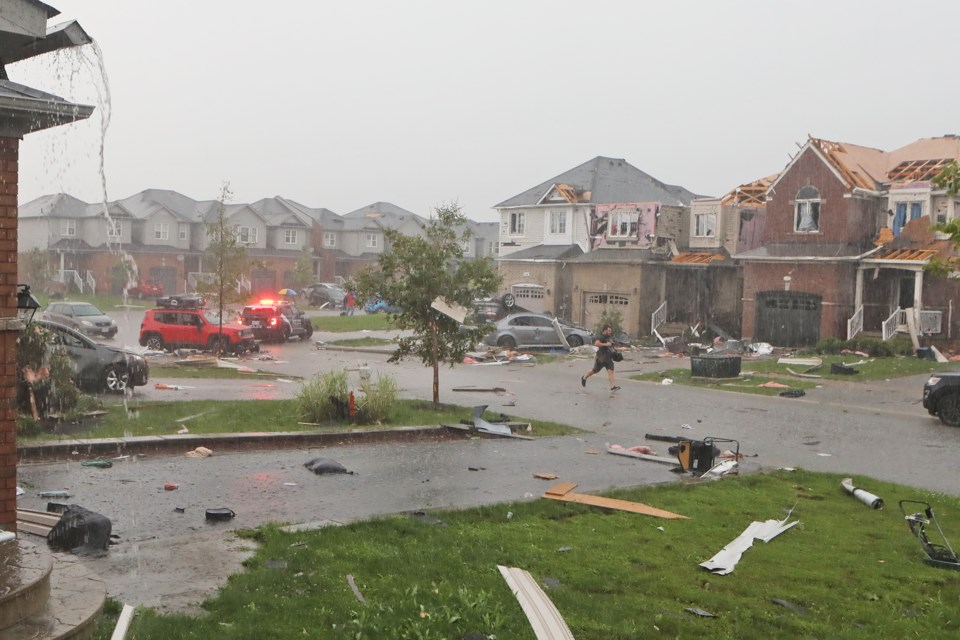 Emergency services personnel, along with neighbours, rush to help people as a torrential downpour hits again shortly after a tornado ripped through the south end of Barrie on Thursday, July 15 in this file photo.Kevin Lamb for BarrieToday

Barrie could know by week’s end if it qualifies for disaster relief from the July 15 tornado.

Provincial representatives toured the affected area around Mapleview Drive East and Prince William Way on Wednesday to determine if the city qualifies for Disaster Recovery Assistance for Ontarians (DRAO).

It’s a program that can help residents recover costs after a natural disaster. The province may activate DRAO for damage to private property if there’s a sudden, unexpected natural event — such as a flood or tornado that causes costly and widespread damage in the area.

“The ministry was on-site today and we expect to hear back in the next few days,” Mayor Jeff Lehman told BarrieToday on Wednesday.

According to a statement on Twitter which was also shared by Lehman, Municipal Affairs and Housing Minister Steve Clark said the province is keeping its word about helping Barrie recover from the storm following a recent visit by Premier Doug Ford.

“Premier Ford promised that we would be here to support the city of Barrie as the work to recover from the devastating tornado that struck your city begins, and in partnership with the municipality, we are doing exactly what we said we would,” Clark tweeted.

Clark said at Lehman’s request, he sent a provincial disaster assessment team to Barrie to assess the damage to homes and businesses.

“This is the first step in activating the disaster assistance program for Ontarians,” Clark said. “I want to be clear that while this program provides financial assistance to individuals, small owner-operated businesses, farmers and not-for-profit organizations to get back on their feet, it is only available after all other means of insurance have been exhausted. Eligible applicants can receive financial assistance for emergency expenses and costs for repair or replacement of essential property.

“The people of Barrie are showing true Ontario spirit, and our government will stand shoulder-to-shoulder with you as you recover," the minister added.

Federal assistance could also be available. The Canadian government provides financial assistance to provincial and territorial governments through the Disaster Financial Assistance Arrangements (DFAA), which is administered by Public Safety Canada.

In the event of a large-scale natural disaster, the feds provide financial assistance when response and recovery costs exceed what individual provinces or territories could reasonably be expected to bear on their own.

Through the DFAA, assistance is paid to the province or territory – not directly to affected individuals, small businesses or communities. A request for reimbursement under the DFAA is processed immediately following receipt of the required documentation of provincial/territorial expenditures and a review by federal auditors.

Just after 2:30 p.m., on Thursday, July 15, a tornado tracked from the miniature golf course on Huronia Road and Mapleview Drive East and continued east toward Prince William Way in south-end Barrie, where it caused significant damage on the north side of Mapleview, and then went beyond the Prince William Way subdivision.

Environment and Climate Change Canada (ECCC) says the tornado track was 12 kilometres long and had a maximum path width of 600 metres.

Gerald Cheng, warning preparedness meteorologist at ECCC, said it doesn’t have information on how long, in minutes and seconds, the tornado was down on the ground.

“That would be difficult to pinpoint,” he said Wednesday morning.

Cheng did confirm it’s only classified as a tornado when it touches down on the ground or buildings.