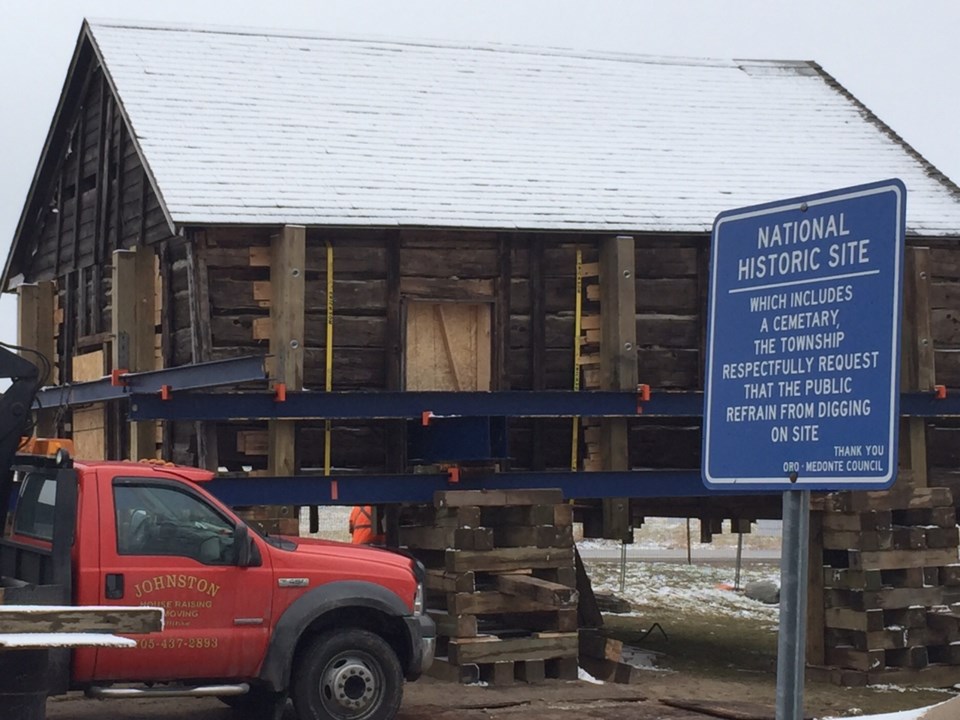 The Oro African Church on Dec. 16, 2015 when it was moved onto a new foundation. Sue Sgambati/BarrieToday

The grand reopening of the historic Oro African Methodist Episcopal Church has been set for the weekend of August 19, 20 and 21.

"We're saying it's a 'save the date' at this point," said Shawn Binns, the township’s director of recreation and community services, who explains organizers are trying to coordinate schedules because so many people want to attend.

The structural work on the church should be completed this week, weather permitting, said Binns, and then crews will start with the finishing work on the wainscoting, ceiling, roof, chimney, windows and doors.

"The building is starting to come alive again. As all of those elements get completed, the more life it will breathe back into the church," said Binns.

The project is massive, not in the size of the small 20 by 30 log structure, but in the intricacies and craftsmanship required to repair something that is 170 years old.

Janie Cooper-Wilson, a descendant of the Oro black settlement, applauds Binns and all the people who have done "amazing" work.

"They're part of history and they're just blown away by it," said Cooper-Wilson who marvels at how modern construction standards were incorporated without jeopardizing the historical integrity of the church.

She says the reopening will be "exciting and emotional."

"I'm overjoyed. Thrilled to pieces but it's been a long haul," said Cooper-Wilson.

The small log building, located at Old Barrie Road and Oro-Medonte Line 3, was built by black pioneers circa 1846 and designated a national historic site in 2000.

Binns says the restoration has been a challenge but also very rewarding.

"The story is not only about the church but about how the community has come together to rebuild the church," he said.

The church's history is featured in an exhibit at The Orillia Museum of Art & History from April 30  to September 18 called If These Walls Could Talk.

Reduction in number of county councillors being pondered
Feb 28, 2020 7:30 AM

Good morning, Barrie!
Feb 28, 2020 6:00 AM
Comments
We welcome your feedback and encourage you to share your thoughts on this story. We ask that you be respectful of others and their points of view, refrain from personal attacks and stay on topic. To learn about our commenting policies and how we moderate, please read our Community Guidelines.