All the ice is a stage for champion Jeff Buttle

He is a stager, a choreographer, and aiming to be the best in that capacity with younger figure skaters, much the way he did in his heyday as a competitor himself.
Dec 28, 2016 10:00 AM By: Glenn Wilkins 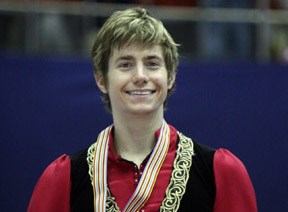 Even though he no longer rules the roost as he did in medaling in the 2006 Winter Olympics, and winning the world championship in 2008, Jeff Buttle is busier than ever, shuttling all over the world from training this athlete or that. Half the fun of talking to the guy is getting him to come back to Earth, literally.

“I'm a very lucky person when it comes to my professional life,” Buttle tells BarrieToday. “I currently spend my time traveling the world, making a living as a performer as well as a choreographer. As I get older, my participation as a performer is slowly becoming less hectic, but my career as a choreographer is building and getting more intensive. I'm passionate about what I do for a living, and isn't that the best?”

Buttle, now 34, made Barrie and all Canada proud when taking the world title in Gothenburg, Sweden, having trained at the Mariposa Skating Club, he  recognizes that Canada has a potentially steady run of future champions, most notably Patrick Chan, three-time king of the blades. Jeff maintains that Patrick will return to the top of the heap yet again, at the next world championships in Finland in March.

“Not a single skater can match his basic skating skills, edge control or power. His success is not only due to his early coaching (under the legendary Osborne Colton, who also trained Barbara Ann Scott and Don Jackson), but of course a testament to his training and hard work. Talent can only take you so far; it's hard work and dedication that separates the good from the great.”

Back to Jeff, though, he admits it was an adjustment from being great to making others great.

“Competing was a very selfish mentality. Every decision that I made while competing was for the benefit of my skating. Now, it is very different.  I do my best to help my students be their very best, making sure to work around their schedule, making sure that they are at their best.

What’s more, “the satisfaction that I get from watching a student succeeds very different, but I am able to relate to the emotions that they feel. Helping another skater realize their dreams is just as fulfilling, but in a much different way.

Jeff also says, unlike in the past when our athletes were the poor cousins of the almighty Soviet, Iron Curtain and American skaters, often coming out on the short end of many political decisions that left our delegations sputtering, Canadian figure skating fans have lots to cheer about, with current and future champions ready to take their bow.

“Canada has truly become one of the super-powers in figure skating.  Our strength not only lies in the popularity of the sport itself, but more so in the strength of its history and therefore the absolute depth of professionals in terms of coaches and choreographers.”

And the next big thing is a kid training in Toronto under the equally legendary Brian Orser, and Jeff’s own former coach Lee Barkell. His name is Stephen Gogolev.

“Keep your eyes open for him! He is only 11 years old, but is already landing the hardest jumps that have been accomplished in skating.  I've witnessed him land a quadruple lutz, and he is landing other quads on a regular basis.  This is unbelievable!  He is a very bright light in the future of Canadian skating.”