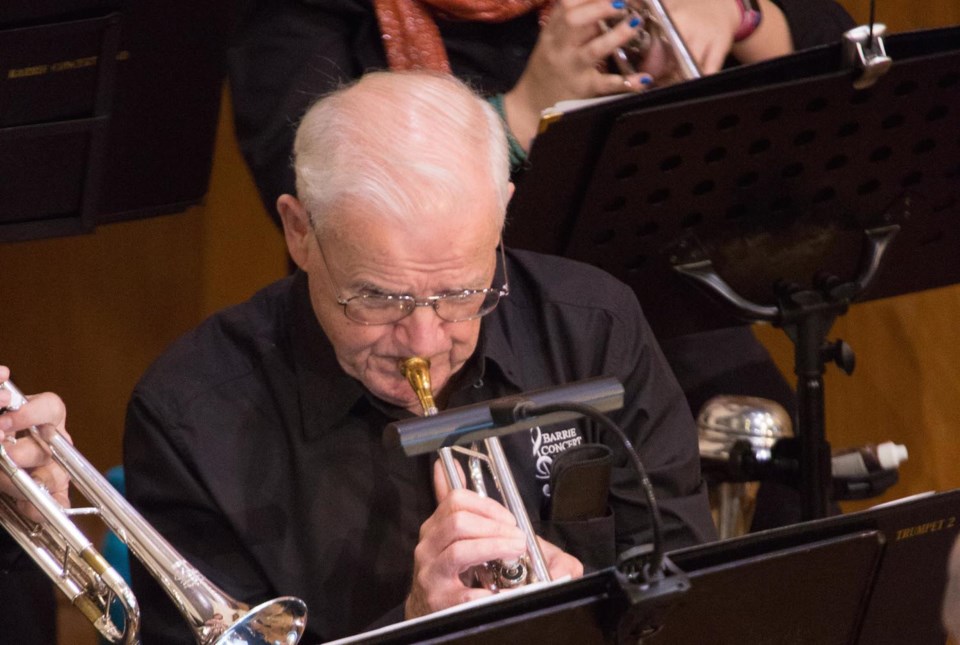 If loving something means never putting down your horn, George Cairns is in love with concert band music.

Cairns, who turns 90 this year and has been a member of the Barrie Concert Band for 65 years, has obviously seen a lot of concerts, and a lot of musicians come and go. Through it all, George has been happy just to play.

The Hamilton native told BarrieToday he started with the Barrie Citizens’ Band (as it was then called), having taken up the trumpet in his teens at various engagements in Toronto, when the call of the armed forces grew louder

“I was working at Massey Harris on shift work and I absolutely detested it, but I did it for five years. Then I got a chance to go to the army and play the trumpet and make the same money. They paid good. I was making close to $400 a month, back then that was good money.”

“I played with the Artillery Band in . I was 18 or so. I joined the regular army in 1951 and I spent six years in that band. They were called the First Infantry Battalion Band, when we were in . There were only about 15 of us, and we had to work real hard. When we came back after about a year, the government designated us as a band, so from there on we were called The Guards Band.”

“I played with a lot of dance bands for years and years, sometimes the Bob Hunter Band, but not too often because he had a full section. We had a little combo in the early ‘60s. It was supposed to be called the ‘Rhythmen’, not ‘Rhythm’, we made a mistake in the name.

“I never went to war,” he says, however. “I never had a rifle in my hand, just a trumpet!”

also isn’t sure there’s necessarily an emotional connection when playing with others in a band, but there is a bit competition, as in “who’s going to play what part? I’m long past that. I don’t care what part I play.”

George demurs about naming favourite composers, but loves to hear great singers like Frank Sinatra, and, of course, trumpeters like Harry James and Louis Armstrong. Nor, despite what people might expect, does he care too much for marches.

“I played them for six years in the army. Some marches I like, but I’m not crazy about them.”

Among the multitude of conductors he knew with the concert band down through the years, his favourite was Ken Hollier, who waved the baton back in the 1950s, and took over from Joe McNeillie when Joe passed away.

“Ken was from the army when he took over the band and he was an excellent conductor (however), he left shortly afterwards to work in .”

To pay the bills to support three children from his first marriage, George drove a dry cleaning truck between Barrie and Base Borden, for a fellow named Burt Gosney.

“He eventually wanted to sell (the truck), so if I didn’t buy it, I wouldn’t have a job. So I bought this truck and I did that for about 10 years or so, and then finally got a chance to buy the business. I had the business for about 35 years. The name of the business is Wright Cleaners.”

Lastly, are there any particular concerts George Cairns looks forward to throughout the year more than others? “I enjoy some of them, but it depends on how you feel, sometimes I don’t feel like going at all, but I go.”

Thornton man faces impaired charge after suspicious vehicle reported
Feb 27, 2020 6:19 PM
Comments
We welcome your feedback and encourage you to share your thoughts on this story. We ask that you be respectful of others and their points of view, refrain from personal attacks and stay on topic. To learn about our commenting policies and how we moderate, please read our Community Guidelines.