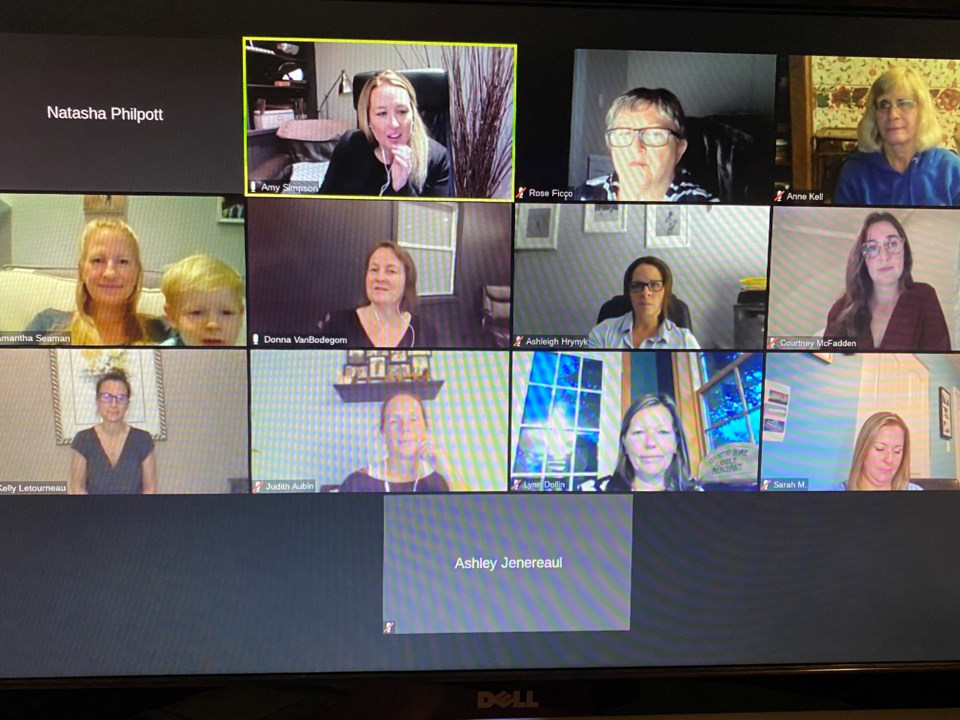 The 100 Women Who Care South Simcoe group recently met virtually for its quarterly fundraising event in support of local charities.

Four times a year, 100 local women get together with $100 each and listen to officials from three different charities in the community. After they get a chance to listen and learn more about each organization, they vote on which charity they want their donations to go to.

The charity with the most votes takes home 80 per cent of the pot, and the rest is split between the other two charities.

The group last met virtually in May, where they heard from CONTACT Community Services, Autism Ontario's Simcoe Chapter and Salvation Army Barrie.

On Thursday, presentations were made by the Innisfil Food Bank, Women & Children’s Shelter of Barrie, and Seasons Centre for Grieving Children.

Donna VanBodegom, co-ordinator for the Innisfil Food Bank, was first to speak, noting that COVID has caused an uptick in client visits. With COVID, she says the way the food bank operates has changed drastically, now offering a drive-up program and visits by appointment only to maintain safe physical distancing.

The food bank is run by two volunteers and three staff members, who distribute boxes containing non perishable goods only.

“We don’t have any perishables at this time, but we do have eggs from a local farmer,” said VanBodegom.

The Innisfil Food Bank spends more than $10,000 a month on food. To minimize physical contact, they are discouraging any type of food drives in the community. VanBodegom says the best way to support the food bank is to donate financially through their website. If any food items do come in, it must sit for a few days in quarantine before being distributed.

In the spring, they created ‘COVID kits’ for clients with grant money donated by the town, which included soaps, reusable masks and gift cards for perishable foods at the grocery store.

VanBodegom said the first two weeks of September have been extremely busy.

“The first two weeks in September we serviced more clients than all of August,” she said.

The food bank sees about 300 people per month, or 100 families, mostly intermittent users, coming between one to five times per year.

Some of the main reasons people visit the food bank include job loss, lay-offs and family breakups, which have been on the rise due to domestic abuse cases, VanBodegom said.

This year, the Innisfil Food Bank is planning to hold its inaugural Thanksgiving distribution by giving out 100 turkeys.

Courtney McFadden, development manager at Seasons Centre in Barrie, was the next to speak and share information about their programs.

Seasons Centre for Grieving Children has been serving Simcoe-Muskoka since 1995. The centre was founded by Rowley Ramey, after his two daughters, Samantha and Jessica, died in a car accident. Seasons Centre provides support for people grieving the loss of an immediate family member.

“Bereaved children have unique needs,” said McFadden, noting many are predisposed to serious issues if not provided the opportunity to work through their grief.

While COVID has had an impact on everyone, she said it has been particularly hard for those who have lost someone.

“This new normal has made it more difficult for those who are grieving, who have lost those in COVID...the mental-health impact it has had has been challenging,” she said.

Throughout lockdown, many programs moved online, but they plan to start hosting in-person group meetings again by following provincial guidelines.

Services at the centre are free of charge. They don't receive any government funding, relying solely on donations and grants.

Kelly Letourneau, development manager for the Women and Children’s Shelter in Barrie, was last to speak.

“Those who work in non-profit see tragedy everyday,” said Letourneau, who thanked the group for the positive things they are doing.

Letourneau shared stories of three women who used to live at the shelter, who suffered from varying forms of abuse, and eventually went on to live normal, successful lives.

“Our 24-hour crisis line takes hundreds of calls a month (from people) taking refuge from violence and abuse in this community,” she said.

The shelter is the biggest in the county, with 27 beds, but takes in around 30 to 35 women and children at a time due to increased demand.

“We are struggling,” said Letourneau. “Due to COVID, we have been forced to provide services to women in and outside our shelter. Isolation and ongoing family stress is having a huge impact on women in our city. The violence women are experiencing is astonishing."

She says the grocery bills for the shelter are approximately $1,500 a week and have been going up.

“You provide healthy meals and a warm bed, you ensure that a woman feels safe and you are there,” Letourneau said of donations from the women's group. “You, as donors, create survivors.”

The shelter is 75 per cent funded by the government, with donations filling the gap.

Letourneau noted that, due to a lack of affordable housing in the area, they see the bottleneck at the shelter.

“Ten years ago, the length of stay would have been a month and now it’s upwards of six,” she said.

The shelter operates on a first-come, first-served basis and there are no wait lists.

After hearing from the presenters, the group voted on which charity should receive the majority of the funding.

It was the Barrie Women and Children’s Shelter that took home the bulk of the pot.

Letourneau said she was humbled by and thankful for the group's generosity.

Organizer Amy Simpson thanked everyone for coming out to show their support, reflecting how it was just last year she had the idea to start the group as a way to give back to people in the community who need it most.

A total of $1,600 was raised for the charities on Thursday evening and donations will contine to be accepted.

Anyone looking to donate, or take part in the group, can join the 100 Women Who Care Facebook page here or follow them on Instagram with the handle @100womensimcoe.